My late husband Bill and I were committee members and officers of this Society for many years. After his death I have continued to serve in various capacities. At our quarterly meetings we discuss many things, such as the organising of Fish-Ins, the dangers they could pose for members who attend, and our insurance position in case of an accident. Like all red-blooded anglers I abhor the overly litigious State we live in now, but “That’s the way the cookie crumbles”, as they say. Anyway, these discussions brought to mind a particular Fish-In that took place in Cornwall some years ago. 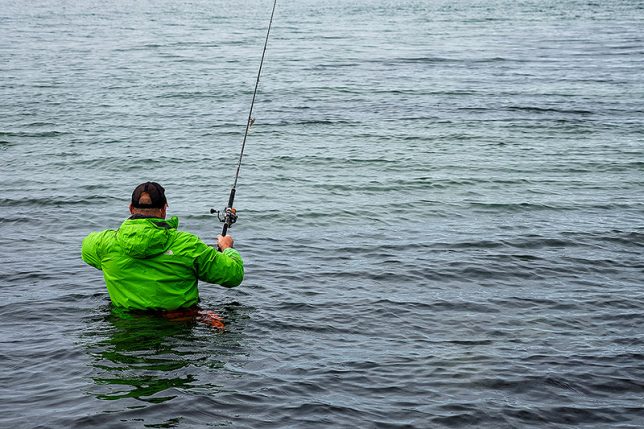 After we married in 1975 Bill and I bought a fishing dinghy and used it to fish in Southampton Water. Bill taught me the rudiments of boat handling after one hot day, when he swam away from the boat and found how difficult it was to clamber back aboard. After he died I kept the boat until it became too much for me to launch and retrieve alone. I had taken many non-boating friends out in it, and I am sure I would have satisfied all the requirements of that famous advert: “Wanted – good woman for fishing – must be able to dig bait and clean fish – boat owner preferred – please send picture of boat!”

In 1987 the Society organised a boat Fish-In at Polruan in Cornwall, and I was there. I didn’t have the confidence to trail my boat all the way from Hampshire, so I booked a place in one of the hotel’s boats. The Friday night of our arrival featured the traditional wind and rain but Saturday dawned brighter and we could get out fishing, though common sense limited us to the shelter of the harbour. I was concerned when I saw the vessel we had been allocated; a rowing boat with an outboard motor, no built-in buoyancy as there was in my dinghy, no oars, no proper anchor, just a rope and a stone weight, and, of course, no lifejackets. Still, I had come all this way to fish, and was not going to be put off. My allocated boatfishing companion for the weekend was Mr. C, who, it turned out, had no previous boating experience and insisted on wearing his wellies so as to keep his feet dry.

We drifted the river estuary in company with the other boats. Some members had brought their own, some, like ours, belonged to the hotel, and one member hired a local boatman. Mr. C and I caught a schoolie each and everything seemed to be going well, but I don’t think he liked being told what to do by me. After all, a boat is a ‘man thing’ isn’t it?

On the Sunday morning the weather improved and we set out full of optimism, though thank goodness, we were still limited to the river. We drifted for a while, but as the strength of the tide increased we decided to tie up at a mooring buoy. After a while we decided to go back to drifting. I asked Mr. C to untie the mooring rope whilst I started the outboard motor. It started right away and was running in neutral, so I moved forward to tidy the fishing gear. Mr. C had untied us, but as he turned round he slipped and his wellie-booted foot became jammed under the front seat. He struggled to free himself but this just made matters worse. He was hanging face down over the side of the boat. I immediately leaned over the other side of the boat as far as I dared so as to counterbalance his weight that was in danger of capsizing us. Try as he might, Mr. C could not extricate his foot, and I dared not help him because with every move I made I could feel the boat tipping.

My blood ran cold; if the boat went over Mr. C had very little chance of survival, and I cannot swim. We were drifting helplessly towards a rocky shore. The rope and stone anchor were in the forward area by his jammed foot. There were no oars to fend off or to row, and I couldn’t reach the outboard. I yelled frantically and waved my free arm. I could see another boat, but it was too far away for anyone to hear me. “Please, please see us” I shouted, “We are not waving, we are in trouble”. After what seemed an age I saw them up-anchor and come to our rescue. It was then a matter of seconds to release Mr. C’s foot. We then went ashore for lunch.

After lunch Mr. C was miffed that I wouldn’t go back out! I think he thought me a silly fussy woman. To this day, I don’t think he realized how close a call it was.

Though I no longer boat fish, I still do daft things like wading round the reef at Shell Island, and falling into quicksand at Burnham-on-Sea. And I’m over sixty.