A Day To Remember

A Day To Remember

There happens in every angler’s life an event which stands out. A day to remember. In my case the 21st October 1995 was that day. A Saturday afternoon and Wales were playing England in the Rugby League World Cup, but that wasn’t the event that is for ever in my memory.

Myself, Mike Hughes and two other friends revisited an area we had fished a week previously, with bass to 3lb. This area was fairly new to us, but having had success the week before we decided to return and explore the potential further. 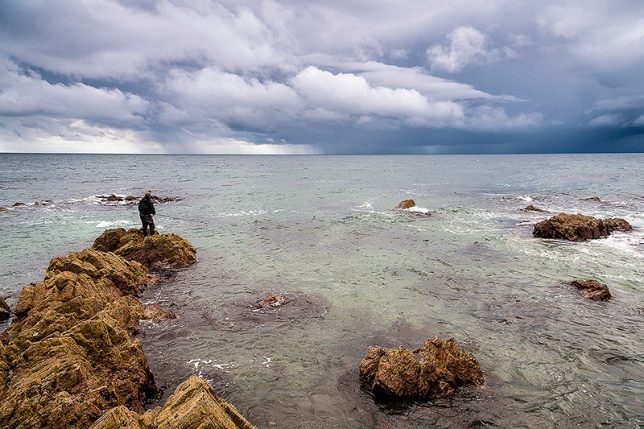 We arrived at our destination and tackled up, electing to use Dexter Wedges. We spread out and started to methodically cast and retrieve. No fish were forthcoming, so Mike and I decided to leave Ross and Tony and traverse the shoreline, fishing and exploring new ground as we went.

The first fish was a mackerel, landed by me on a Silver Doctor. I shouted over to Mike, “A mackerel”. However, Mike had set up his bait fishing gear, and was perched on a rock 100 yards away concentrating on his rod. I carried on walking by myself, casting and retrieving for 10 minutes at a time before moving on again. I must have walked over a mile away from Mike and the others. It was low water and the area consisted of large boulders having a good covering of barnacles — excellent for good, secure footing, followed by a very rocky and rough area of ground with thick weed, making it treacherous underfoot and a tackle graveyard. I changed the Dexter Wedge to a plug, a Rebel J30, and made my way cautiously to the water’s edge, slipping, sliding and staggering several times along the way.

I perched myself on a flat rock, balancing on the slippery weed, and started casting. The water was clear and calm. On my first retrieve I made contact, there was a large splash as the fish hit the lure and I struck hard — but only succeeded in pulling the plug from the fish’s mouth. The recoil of the strike yanked the lure out of the water and it landed about 20 foot away from the take, and about 20 foot from the shore. Surmising that the fish might still be about, I started reeling in quickly in order to recast, but the line had coiled round the rod tip and there was a delay while I untangled it. When I did manage to lift the lure from the water I couldn’t believe my eyes — three large bass turned and swam away. They must have been following the lure in, and I had spooked them. So near and yet so far away!

The tide was now on the turn. Knowing that the fish were now very wary, I crouched down and started a methodical coverage of the area with the lure. On the third cast I made contact. It was a good fish and immediately started taking line. I let it run but kept pressure on, and after playing it for about five minutes I had it in the net. Carefully I carried it back from the water’s edge and weighed it — 7lb 2oz! Shaking with excitement I made my way back to my weed covered rock, which was now getting surrounded by the flooding tide. I was wearing chest waders, so I knew I had around 15-20 minutes left to safely fish from the rock. After 5 minutes of casting I had another take, the rod arched and line started to leave the reel, then … suddenly … nothing! The fish had come off. Undeterred, I started casting again. Two minutes later I made contact again … and again I lost a fish. I checked the lure and discovered that some of the barbs had snapped off one of the treble hooks. I quickly changed to another Rebel and started again. Ten minutes later another fish took my lure. This time, after a short scrap it was landed — 7lb 6oz, FANTASTIC. Two large bass in such a short time. Someone up there was looking after me.

By now the tide had completely covered my rock so I very carefully made my way to another flat rock. I kept on looking to see if I could see Mike walking over, but there was no sign of him. I knew I had another hour of fishing left before I would be completely cut off, so there was not time to go and get him; besides which there was no guarantee that the fish would still be around then.

I started casting again on the flooding tide, occasionally snagging the lure on the fonds of waving seaweed. About ten minutes later the rod banged over as another fish hit. This time it raced off straight out into deeper water, and all I could do was wait for it to tire before I could reclaim some line. This was a bigger fish and took some time to subdue — longer than the other two. Eventually I landed it, and this one went 91b 2oz. I was in a state of disbelief and exhilaration! Three bass … 7lb 2oz, 7lb 6oz, and 9lb 2oz. A bass angler’s dream!

I carried on fishing for 15 minutes but there were no more takes, so I quickly made my way back to where I had left Mike and the others before I would be cut off by the flooding tide.

Too late! I was stopped in my tracks. The tide had won and I was cut off. With no alternative I stepped in. The water was only two inches from the top of my chest waders, Standing on tip toe I made my way as quickly (and carefully) as possible to safety. I still got wet, as water trickled over the top of my chesties, but not too badly.

When I reached the others and told my tale, Mike thought up some rather picturesque descriptions of me and my connections with jam! I didn’t care, I had experienced bass heaven, and it certainly was a day to remember.