People are often surprised to hear I enjoy fishing as I don’t fit their stereotype of an old boy sitting by a canal on a deckchair with a rod and a thermos – I’m a small blonde woman with a fondness for cashmere.  When I started angling my view of the world shifted. It became measured by seasons and the turn of the tides, going out at first light and dusk, watching for the way the fish rise.  I discovered secret places with the promise of fish and prospect of peace, away from the world….  I also discovered a weird world of wonderfully entertaining characters who make up the fishing fraternity and who have welcomed me like a long lost sister to their strange club!  I knew I was hooked when I spent an evening in a real ale pub with ten men discussing the merits of lures and braid, I actually understood their foreign language and strange hand gestures.

I love fishing and have ever since that fine evening in March 2011 when I caught my first fish, a small pollock with LRF gear, somewhere in Sussex.  I had the advantage of living by the sea and having a fishing mentor with a roomful of fishing tackle to lend me and a lifetime of experience to share.  Our friendship became based on talking about fishing, reading about fishing, watching fishing on television, shopping for fishing… and when the conditions were right…actually fishing.  Our shiny silver goal was always bass but murky water along the Sussex coast quite often made conditions challenging and a waiting game.  So I fished at every opportunity I got and was happy to catch anything, anywhere… trout on the fly, wrasse, pollock, mackerel, gobies, flounder, bream, carp on the fly, cod, ray, dabs, plaice, wahoo, barracuda and some delicious squid.  Every fishing expedition was an opportunity to learn something new, even if it was just learning patience after a day of blanking.

I caught my first bass in July 2011, after months of trying on the shore and the river.  It was a beautiful warm morning hours before work, the early sun shining and mackerel shoals flickering out at sea.  After hours of casting, retrieving, and watching my mentors for tips I finally pulled in my first bass, closely followed by four more! I was using a Xorus Patchinko 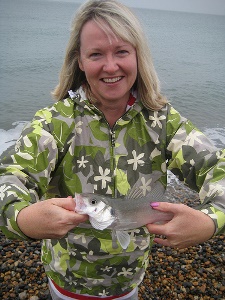 100 with lots of twitching and an IMA Skimmer after that got snagged and lost. It was an amazing morning, such a thrill to catch bass eventually, and to watch all five of them swim away afterwards.

I have learnt that fishing is not just about the fish you catch.  It’s about the planning and anticipation, I know many grown men who can’t sleep the night before a big trip out because they are too excited.  It’s about dawn breakfast in a car park with strange men in waders, it’s about the post-mortem in the pub afterwards, it’s reading hilarious long running sagas on forums.  It’s the generosity of anglers who will give me a lure or a fly if they think it will help me catch.

There is no reason why angling should be such a male preserve;  I’ve never found it intimidatingly ‘blokey’ or macho.  You don’t need to be fit or strong to fish, but you do need patience and a sense of humour.  I was lucky to have a friend to go out fishing with when I started, although I have subsequently fished on my own.  I personally prefer to fish with people I know as going out as a lone woman to remote places or in the dark feels a bit vulnerable, it is also a bit odd to chum up with complete strangers on the beach as they think I am a blonde stalker…or at least their wives do.  When people show an interest in my fishing exploits I always recommend that they hire a local fishing guide to show them the ropes. It’s a great day out for anyone, even if you are not a novice you can learn something new, my first guided fishing session resulted in three large squid and a delicious dinner, with gutting and cooking tips thrown in.  I have subsequently learnt how to catch plaice on bait and lures with the same guide, with filleting lessons afterwards.

It can be very difficult to find suitable clothing in a woman’s size, and it is vitally important 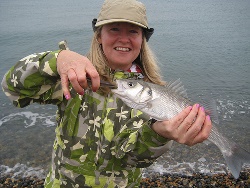 to dress to keep warm and dry, as I learnt to my cost on the August boat trip where I spend three hours shivering in the cabin.  The top end companies such as Simms and Orvis do waders in women’s sizes but it is worth looking at American sites to find boots and gloves.  Despite my girly appearance I never wear pink to go fishing, I just accessorize the drab green and grey clothing with a jaunty scarf and hat combination!