A Lifetime With Bass

A Lifetime With Bass by Donovan Kelley

Several readers of my earlier book, ‘Forty Anglers, 1994’, have asked, “When am I going to write another?” My answer has always been. “Never” – until very recently when I found myself with a lot of typescripts on my hands. Written with the Bass Society’s magazine in mind they had multiplied faster than a quarterly magazine could absorb them. With others already published they have been combined into this book, which I think will appeal to those who enjoyed the earlier one.

Some readers have said. “Why not an autobiography?”; arguing that such a long life with bass must have been very interesting. It was indeed, but that does not mean that a detailed chronological account of my life would make a good read. I am persuaded that it would be a bore to write, therefore assuredly a bore to read. However a short sketch of the salient features of a somewhat unusual life may be of interest. Readers can compare their own lives with it, contemplating perhaps the course they may take in the future.

There have been four distinct phases –

The ﬁrst phase began when my father took me coarse ﬁshing on the Exeter and Tiverton Canals. Seventy years ago but I still remember the excitement of my ﬁrst ﬁsh – a small roach. Later he took me onto the Promenade Pier at Plymouth, where I caught two mackerel. He did not ﬁsh much himself but his own father had been very keen and wrote sometimes in the Fishing Gazette. I have a photo of him (my grandfather) ﬁshing for bass on Exmouth Pier: an old photo of an old angler. My growing interest in ﬁshing received a tremendous boost when an uncle let me all his
ﬁshing tackle. It was freshwater gear, for trout and coarse ﬁsh, but was readily adaptable to sea ﬁshing. Father got me a permit for Millbay Docks, reputedly the best place in the Plymouth Harbours. There I learnt much by watching the experts ﬁshing for (and catching) mackerel, pollack and mullet. Soon I was matching their successes. 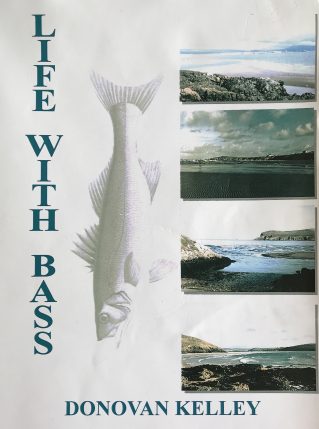 But bass did not come into Millbay Docks. That interest came when my parents moved to Torbay. I was now in my early ‘teens and had begun rock-ﬁshing for Pollack and wrasse. One day, ﬁshing from rocks outside Dartmouth Harbour, I met Ray West, who was already a legendary ﬁgure in the bass world and soon became my mentor and friend. He had just caught a 6lb bass, his ﬁrst of the season. It was the most beautiful ﬁsh I had ever seen and it touched off a lifetime’s devotion to bass. At about the same time, ﬁshing for mullet in Teignmouth Docks, I caught some tiny bass: only three or four inches long, but to me just as fascinating as Ray’s big one. I was into the second phase.

The third phase was not long in following. Those tiny ones aroused my curiosity. How old were they, and what were they doing in that unlikely situation? They were in just a few inches of water under a small warm water outfall. It was the start of a lifetime of asking questions about bass – and sometimes ﬁnding the answers. I read all the books on ﬁsh and ﬁshing in the local library. Some told how the age of trout and salmon could be learnt from their scales. Could the same be true of bass? I tried it and found it could – although it took a little while to sort out problems, including that of when the annulus (annual ring) was formed.

The learning phase was interrupted for seven years by the war. While away I laid plans for resuming it, should I return safely. Prominent among them was a scheme for tagging bass, to ﬁnd out where they went in the winter. I did return and at once set about implementing the plans. I became a member of the Marine Biological Association of the U.K. and paid many visits to their Plymouth Laboratory. I met the eminent Director, Doctor (later Sir) Frederick Russell, and found him interested and helpful. An angler himself, he saw the bass as an ideal subject for investigation by amateurs. Sadly however my plans for a tagging study had to be abandoned when the manufacturers of tags failed to deliver. After seven years on a war footing they had not yet reverted to civil production. But other studies were possible and were actively pursued: spawning, feeding, growth, differences in the sexes. In Ireland Michael Kennedy was preparing his monumental work ‘The Sea Angler’s Fishes’ and we were in regular touch, sharing experiences. He recommended me to publish my ﬁndings, and the resulting article in Angling (1949) aroused much interest and brought many contacts.

That phase, of modest researches with intermittent reports of the results in the angling press, continued for twenty-ﬁve years. But I still had hankerings to do something more ambitious, including particularly a tagging study. We still knew nothing about seasonal migrations, nor had we solid facts on the level of exploitation – about which fears were growing. My chance came in the early l970‘s. when the Natural Environment Research Council approved a proposal I had put to them for a tagging study concentrated in an area on the fringe of the range (Anglesey). They agreed to meet the cost for three years (it actually ran to ﬁve) and suitable tags were provided free of charge by the Lowestoft Laboratory. The study duly went ahead and met all its objectives. Corroborative studies followed in N.Pembrokeshire, N.Cornwall and Essex – the last with tagging by Bob Cox and fellow charter-operators at Bradwell while I kept the records and read the scales. This is not the place to elaborate the results, but they all added to our knowledge of bass – their migration, their varying growth in different areas, the relative abundance of different year-classes, and the rising exploitation rate. As the studies developed I was beginning to realise the ongoing nature of ﬁsh research: it never reaches ﬁnality! The early adult-oriented taggings were followed by others directed at the juvenile bass. Meanwhile I had in 1981 started investigating the very young (“O-group”) bass in the estuaries of West Wales and South-West England, to check the abundance, growth and ﬁrst-winter survival of each successive year-class. The information is important for the ongoing appraisal of bass stocks by the Ministry scientists. It is a continuing annual process, extremely interesting and one which I commend to readers whose interest in bass goes beyond mere catching.

Research unquestionably adds a new dimension to ﬁshing. I have never regretted getting involved in it. The inevitable paperwork can be demanding, especially when the results are to be published in a marine science journal – for which the preparation can occupy many months. But there is enormous satisfaction in discovering new facts about bass, especially where those facts are important to management and conservation.

This is a very short sketch of a long fishing life. It does less than justice to many aspects of it – notably the friends who participate in the research. Most are members of the Bass Society, whose ‘Fish Recorder’ Malcolm Brindle spoke for all of them when he said “it will be nice to put something back into the sport which has given me so much pleasure over the years”. Many were recalled in “Forty Anglers” – but a notable omission was the professional scientists involved with bass, who had become close friends. I excused the omission on grounds that it seemed presumptuous to bracket them with amateurs. I have changed my mind on that and, later in this book, remedy the omission.