A Pet Of A Day

A Pet Of A Day

It had been bad for a couple of weeks. Not so bad as to cause damage or sleepless nights, but enough all the same to keep me at home. A good bit of rain, and at times some fairly strong wind, but worst of all were the swells. Normally at this time of year (February) I’m looking for swells, regular patterns left over from low pressure systems as they sweep in from the Atlantic. Between each system a ridge of high pressure eases the wind and the sea, allowing the sun to break through to warm the shallows and bring in the fish. Days in which to do as much as you can before the wind swings round again to the south and clouds thicken with the approach of the next system in line. 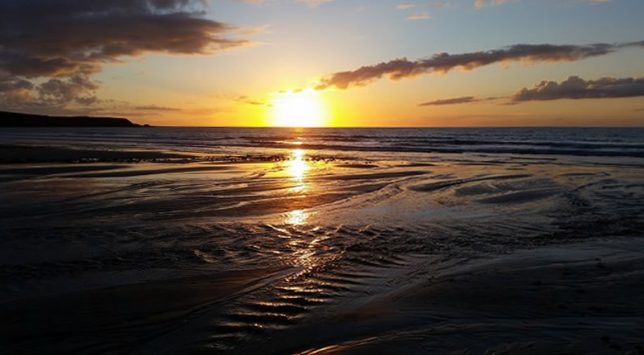 But for the last two weeks the wind hadn’t eased, or swung round from its west or northwesterly set. And the sea hadn’t abated from pushing ashore without rest. Long rolling swells born in the heart of an ocean a long way from land, day after day they had swept into the harbour. Travelling in long sweeping curves, rearing up landward as each neared the shallows to the right of the pier, where they each broke in turn, hollow, diminishing into a long tailback of white to finally break fully into spray against rocks on the far shore. These were my markers, my gauges, as to what the surfs would be like on the strands of Brandon and Inch. Each day though, dawning with far too much surf and blown about by a strong onshore wind, it had not been worth the trip to see for myself. Age and experience has its advantage; I have learnt to bide my time and wait for conditions to improve whilst, each day, hosing down the windows and the salt from the car.

And improve they did. In a day out of nowhere that caught me totally unawares. A day that crept through the curtains in a bright bar of gold hanging crookedly high up on the wall opposite the bed, whilst from outside the silence was so complete it was as though the rest of the had stolen away in the night. I tweaked open the curtains. No rain, not a movement of wind, and the sky as clear as a bell. I leaned over further to check out the surf. It was low and breaking nicely into just the right amount of white. Low water will be at 11.30am – I was up and dressed in a flash.

In an agony of indecision I chose Brandon rather than Inch, reasoning that with so much in the way of recent swells there would be less of a chance of weed and, almost before two slices of toast and honey had time to hit bottom, I was at the top of the Connor Pass with the world at my feet. No time for views though, I drove straight on down, past Kilcummin, past Gowlane and on to Stradbally where I thought my best chances lay. In chesties and clutching the ‘lucky’ bass rod I had made at the previous year (with bass up to 9¼ lb now to its credit) I walked through the gap and onto a strand six miles long with not another soul in sight. Just a vast stretch of sand in each direction, mountains astern and way off to the left, and a surf to seaward breaking white against blue. Absolutely awesome.

Strange though how Stradbally is not the most popular spot on the strand, the more common places being Kilcummin and Fermoyle. OK, so it does have a fair old lateral movement of tide, especially on spring tides, and at low water there are some fairly deep holes that can throw you off balance, but apart from that there’s no reason why it should be considered a less attractive spot. Indeed it can often have the best surf, and a strong lateral tide is precisely what I like when using a light outfit, walking along with the 3oz weight as it covers more ground. And just offshore, maybe four or five hundred yards, there’s a bank that breaks in a swell and must surely be attractive to fish.

Anyway, on that day it looked good to me and I decided to try just to the left of a small bar that went off shallow to the right. Beaches with strong lateral tides can often bring up such features, only to have them disappear by the next visit; in an otherwise flat expanse of beach this is exactly what we should be looking for. I thawed out a razorfish, putting another in my pocket to thaw out for later, and carefully wound it onto a 5/0 hook. Then lashing it on with very fine shirring elastic I sent it out about 60 yards beyond the second or third breaker. The books all talk about the third breaker and although it is not quite as simple as that, it’s a good place to start and highlights the fact that surf fishing is not about casting too far. You just want to get a bait out intact to where the fish are feeding, with the minimum of fuss. A single-hook paternoster rig, no fancy sequins or beads, no impact shields or even a shock leader (because powerful casting is not necessary). When you’re fishing light, even facing a big surf on a day with little or no wind, there’s no need for anything more. So with 17lb main line straight through and with the rod held at right angles to the line, I wandered slowly through the surf following the weight.

It was absolute heaven after being inside for so long. Warm winter sun, the taste of salt, and the sound and feel of waves as they broke hard against my waterproof jacket. What more could a man want? Well, a fish would be nice, and although the water was still very cold there was always a chance. As I pulled in my bait for the second time I noticed an increasing amount of sand in the surf; not a good thing, and I decided to move. I moved left, with the direction of tide, to where the beach bends between Stradbally and Gowlane, counting out 400 paces before being able to send out my third razorfish again into clear water.

It seemed to do the trick because, just as I had taken some nice shots of the surf at ground zero, everything went slack. Tightening up on the line, I felt the fish and immediately struck. That woke him up, and he took off pulling the rod tip hard over before the pressure brought him up short. Then began a really good fight; long moments of me gaining nothing, just leaning back into the rod, holding the fish against his desire to run and feeling him shaking his head. Slowly I gained line a foot at a time with the rod doing most of the work until closer in, when I had to give line repeatedly as the runs became unstoppable with the surf in his favour. Another beauty of fishing light, the fish is allowed to give of his best and the fight is never over till the fat lady sings. Even in the shallows this one didn’t want to give up and every time I tried to lift his head to stop him using the sea for purchase, he buried it again and took off with me chasing after him as though being taken for a walk by a large dog. A time when a lot of decent bass tend to get lost. Not this one though. With the hook stuck well and truly in the scissors I finally guided him ashore and started breathing again.

Incredible isn’t it, we have this resource that any visiting angler would gladly give his eye-teeth for – to be able to stand on an Irish storm beach in the back end of winter, with such a beautiful fish at his feet. And yet still the powers that be don’t seem to fully realize its potential. If they did, they would surely stamp out poaching and give us conservation for real – long term. However, Ministers come and Ministers go and still we have to lobby each year to maintain conservation. But you never know, maybe things will be different with the new Minister for the Marine, and with that in mind I weighed and measured the fish and took a few scale samples for the Central Fisheries Board’s census research. I then gently allowed it to swim away. 6lb 12oz – not a big fish by any means, but a real fighter and very welcome on such a beautiful day after so many bad ones.

The day ended though, on a sad note. Just after arriving back home, I received a phone call from a friend in the north telling me that a friend of ours had passed away. Fred Holt, a fishing companion from Wales, with whom I had spent many happy hours on the strands of Brandon Bay – Fermoyle, Kilcummin and Stradbally, each of us up to our armpits in suds. So it is perhaps befitting that I dedicate this pet of a day to a very good angler and sportsman, who I know would have enjoyed it as much as I had. So Fred, wherever you are now, this day was for you.