A Preference For Bait Fishing

A Preference For Bait Fishing

The majority of anglers who visit the Purbeck shoreline in Dorset prefer to use plugs or occasionally spinners or ﬂy. In the past this has proved to be a highly productive form of ﬁshing, with plenty of ﬁsh including specimen bass. However, over the 1990s large ﬁsh became less numerous, with lure anglers struggling to ﬁnd ﬁsh over 6lb. 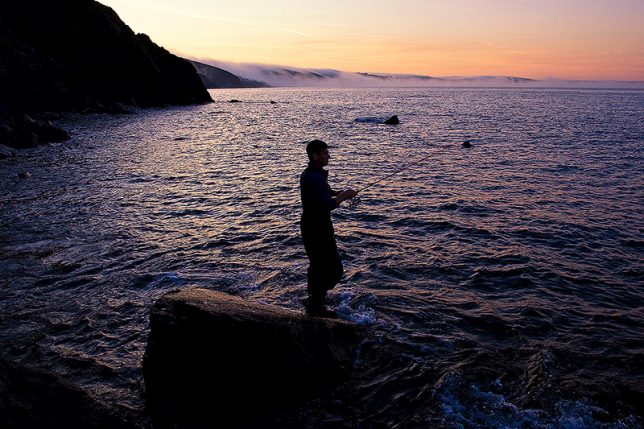 For many years I have concentrated on ﬁshing large baits close to the shore and the results have been encouraging. In six years of trials the heaviest ﬁsh weighed 13lb 14oz, 10lb 2oz, 10lb 2oz, and 10lb 1oz, plus 26 ﬁsh averaging over 8lb. All these ﬁsh were caught bottom ﬁshing with either calamari squid or blast-frozen mackerel. However, to catch big bass, anglers must be prepared to put in many hours during darkness at remote shore marks that often entail a long and difﬁcult walk. There is no easy short cut and it is often a case of learning from your own mistakes. It also pays to take care with the presentation of the bait and to ﬁsh as naturally as possible.

The tackle I use is simple. The rod is an ordinary pike rod with a large carp ﬁshing reel (‘Big Pit’ type). Line is 20lb mono straight through. The trace is 30lb Amnesia about 40 inches long with a running leger ending in a Pennell rig using two 4/0 American baitholder hooks. Some of the ﬁshing is from a high ledge where it is impossible to use a landing net and very difﬁcult to handle a drop net when ﬁshing on my own in a rough sea. In these conditions I increase the mainline to 30lb and the trace to 40lb, the trace being an 18-inch running paternoster leading to a single 4/0 ‘Meat hook’. This heavier and simpler rig enables me to hand line fish upwards, using industrial gloves. 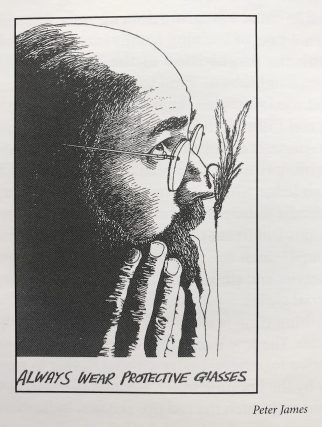 The best ﬁshing time is after dark on a medium height tide preferably during the ebb. The low tidal range along the Dorset coast allows you to fish in a location for several hours without having to worry about being cut off suddenly by the flooding water. Because of the long wait between takes I use a rod rest and watch the rod tip. The ﬁrst indication of a bite is a slight pull. I then release the clutch and the ﬁsh usually runs with the bait. After a hard strike the bass needs to be played ﬁrmly and not allowed to get amongst the many snags. I used to skin-dive this area and have seen big bass feeding along the many reefs and weed beds so I have an idea where the best ﬁshing should be.

The season usually begins in March, a time when few baitﬁsh are around. The bass at this time are heavy for their size and sometimes contain a roe weighing over a pound. The early ﬁshing lasts until around late June, when they move offshore and become preoccupied with mackerel and sandeels. After the quiet summer period the best ﬁshing is in October and November. I have found that a rough sea brings the bass inshore, and by carefully watching the weather it is possible to catch bass in very stormy conditions. When using two rods I like to use circle hooks (which were originally designed for long lining) in light wire for lip hooking. When the rod is left unattended the ﬁsh will hook itself. These hooks are very strong and one night I lifted a 10lb undulate ray 60 foot from the water with the ﬁsh just held on the point of the hook. When putting on a mackerel head I like to use two of these hooks, one either side of the head.

During late autumn a few good bass are taken from Chesil beach by accident when anglers are ﬁshing for cod. It sometimes pays to ﬁsh two rods with one cast very close in to the shingle. Occasionally it is possible to catch pouting that are just the right size for livebaits. Some Chesil anglers slide a livebait down the mainline using a clip-on swivel tided to a short trace, incorporating a bullet lead of 1 to 2 oz. This can get the livebait out past the surf line. Large squid or mackerel baits can also be used in this way. Normally the bass are 20 yards or so out, just behind the usual single breaking wave.

Although lure anglers catch many more bass than I do, when it comes to ﬁnding quality ﬁsh I still prefer to sit it out with large baits. To quote an old sea ﬁshing saying: “Big bait – Big ﬁsh”.

Historical note: This article was published in BASS magazine no.100 Winter 2001