I like fishing as light as possible when conditions allow, tonight was perfect little wind, slight sea and plenty of open water. Armed with one of my light set ups, Daiko spear SRS832ULS micolite 1-10g matched with a Daiwa Certate Hi-Gear custom 2506, my plan was to find some Bass on an open beach. I passed  two blokes who were on the beach spinning, they asked for some advice as they had caught nothing. Their set-ups were fine so the only info I could offer was to keep moving and cover the water.  A Small sea trout jumped just as I was heading on my way, one of the lads said “they have been jumping all afternoon, you can’t catch them in the sea!” I replied “oh yes you can ” as I was clipping on a small metal, I cast, three turns of the reel, wallop !! Fish on ! The two guys look in amazement along with slight frustration as I land a small 1lb sea trout, after feeling quite chuffed at playing superhero best pro-fisherman ever!  I said my goodbyes & was on my way to my preferred area. Now I normally fish here over high water but due to talking to the guys I was late and the tide is into the first hour of the ebb, it’s not a deep water mark even at high but was now starting to show weed on the surface. With approx 2-3 ft water 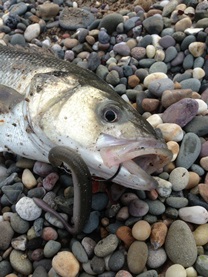 weedless SPs were the only option, I rigged up an OSP Dolive on an owner twistlock and started covering small gullies in-between weed. It wasn’t long before I had an aggressive take, the little Daiko bent well and a small amount of line peeling off the Certate, a 2-3lb fin perfect bass was beached, a quick snap and back she went.

Fishing had started well but the tide was ebbing quickly, i did have that element of doubt in my mind in that would be my only fish but surprising the fishing just got better with a fish on nearly every cast. Now these fish were in no more than 2ft of water feeding hard, the little Daiko was getting put through its paces it had some serious bends but never felt under gunned, it is so much fun to use. I’d told my better half Helena I’d only be an hour and that had well passed, oh well am in the dog house already can’t get any worse i’ll have a few more casts. I lasted another hour before the guilt and thought of Helena not speaking to me all weekend or even confiscating my gear got the better of me and had to leave. I ended the session with 14 Bass, a couple of small sea trout and a smile that would put a Cheshire Cat to shame, a true Red letter day !

Helena is simply the best as when I returned home all she said was “that was a long hour” with a smile, phew I thought no need to cut through any atmosphere on the way to the front room, I have agreed to stay in tonight, I’ve had an extremely good fishy fix after all.
I did bury my phone in the sand and took a short video, so here you go …. Enjoy ….
Regards & bendy rods.
Author: Nick Robson