A Weeks Bassing In Portugal – Part 2

Wednesday morning saw my back at the same area, but as I was driving down something told me to have a try off the beach instead, rather than heading straight off the rocks.  It was a couple hours after high tide so I wasn’t sure I could access the spots anyway.  I clipped on a 40g Little Jack Metal Adict, with a pink back.  I’d used the smaller 30g lure to good effect on a Pembrokeshire beach recently so was highly confident that it would work.  I entered the water in the centre of the beach, with a plan to move to the right and then back all the way to the left before the surfers arrived, when I might go and try off the rocks before heading back, I was probably only a few casts in when the lure seemed to come slowly to a stop, with the rod arching over – due to the slow nature of this outfit compared to what I am used to back home it does seem to take a while to realise that a fish is on!  It was immediately obvious that this was a large fish.  It was just hanging there, slowly moving to the right.  Then it turned and went left, seemingly oblivious to me pulling from the general direction of the beach.  I was extremely conscious of a deeper gully behind me, and if I wanted to beach the fish, then perhaps I should start backing up.  I also flicked the chest mounted Go Pro on at this point, not bothering previously as it was still pretty much darkness when I started.

Fed up of going left and right, the fish seemed to decide it was time to head out to sea – it seemed so easy for the fish to take line I tweaked the drag a touch, only 2 clicks.  This did slow the fish down and I was ready to start trying to gain line again, with the fish probably being 70m out still, but just a few seconds later the line fell slack as the fish just fell off.

This was absolutely sickening – a later post mortem concluded that I may have been able to do a couple of things differently: Firstly – Stand still – don’t walk back to beach until fish is beaten or landed, secondly – be patient, there is no need to tighten the drag up when fishing the surf, and there is no rush to land it, and thirdly – upgrade hooks on all lures, this example has a very small assist and a size 4 treble on the rear (not that there was anything wrong with them on inspection).  All that considered though, I have still put it down as one of those things – sometimes they do just fall off although in my limited experience the bigger ones generally stay hooked.  I continued to fish the surf, and landed and released another fish around the 3lb mark, again I tried the rock spots that held some fish on the first day but to no avail, not a single fish to be found despite conditions feeling fantastic.  Also on the plus side, I didn’t suffer a single wind knot issue so would fish on with full confidence in the gear.

My luck was to change later that day though,  I got back to base, had some breakfast and got the family off ready for a beach day – on our arrival though a sea mist had arrived, and Jem wasn’t feeling it, so we jumped back in the car, headed for higher ground and pointed it at some blue sky to the north west.   The wind had been consistently SE for a few days, so those beaches would be nice and sheltered.  I knew there were a couple of lovely surf beaches in that area, and I had discussed them with Grant before my trip, and sure enough as we drove down we could see some beautiful blue-green oxygenated surf, with the associated line up of surfers.  We had a cracking swim, and played with the kids in the surf and then retired to the beach side restaurant for a lovely seafood lunch and a couple of beers.

Back on the beach for an hour to chill and I asked my 7 year old Rowan if he wanted to come for a walk with me to fish the end of the beach.  It was a bit too dodgy for him to also fish but I found a dry rock to sit him on and made my first cast with a 50g Enticer. There was a decent surf and strong current here, with gnarly boulders to fish off, it was just after high tide which is a time I like to fish many of my home marks, especially on the edge of large beaches like this.  I changed position slightly, and first cast I spotted a big mouth behind my lure and again, in slow motion I felt the tension in the gear and it was fish on again!  I shouted to Rowan that I’d got one, and to ask him to start filming on the Go Pro!  The fish was played and landed with a minimum of fuss, probably in half the time it had taken me to gain zero m of line on the mornings fish.  It’s quite straight forward when using 40lb leader to just use the swell to beach the fish up on the boulders.   I let out a few whoops as Rowan was there, and he helped me to weigh, video and release the fish, I hoped for some underwater filming but a bigger wave surprised me and the release was rather inelegant! 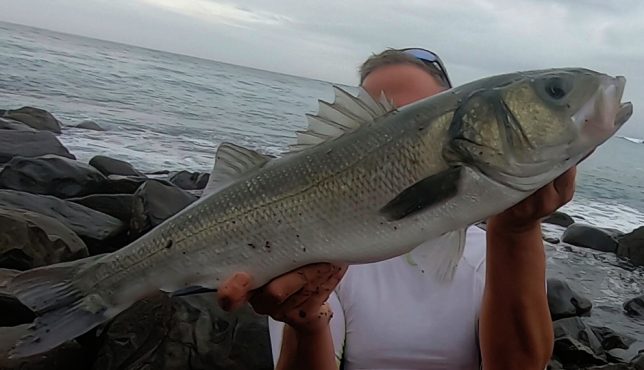 She was a beauty at virtually 70cm, but I was happy to settle at 69cm, a fish well over 8lb I would say.  Rowan was delighted and wanted me to fish on, so I duly obliged but didn’t have any more chances before we had to head back to the girls and go back home.  I had made a mental note that Friday and Saturday mornings the tide would be at a similar state to now, so I hatched a plan to come back (the next morning would of course be spent back at the spot of the morning’s loss!).  It was only later that evening that I found out that rowan had not only filmed the capture, but done a sterling job of commentating, it’s pretty cool to have this memory recorded on film.