A Weeks Bassing In Portugal – Part 3

Thursday’s swell forecast was for a little increase, combining that with the previous morning’s loss saw me skipping the rocks and heading straight into the surf with my metals.  Annoyingly, a really thick mist came down, which made the fishing a bit tricky, I lost my bearings with the beach being out of sight a couple of times.  Worse though was that the tide was later and the trough at the top of the beach proved impossible to cross, it was really awkward with waves bouncing back off the steep beach and coming back across the trough meeting the oncoming waves on the sandbank which I wanted to fish from, creating double height mountains of water.  I tried in numerous places, but just ended up being picked up and floated back one time too many.  I fished on, catching a teeny spotted Seabass, and then another schoolie, but ultimately, I was wet through and the session was something of a disaster.  I also tried the rocky areas later but didn’t find any more fish.  This was also the last session I would use my waders, and I have put a wetsuit on my list to pack for next year to enable me to fish these conditions effectively.  The swell forecast for both Friday and Saturday was back down again, and I had planned to return to the spot where I landed the 8lb fish.  Shortly after arriving I learned that the smaller tide meant that I would need to get further along to reach some attractive looking water, this involved some tricky wading and climbing over slippery rocks near the high tide line.  My camera man was still in bed and I felt that using it chest mounted would probably result in footage that would give the mark away, so I set the tripod up to capture the action.  I’d been fishing around 45 mins when I spotted a decent fish behind the lure (50g Enticer of course), and it made no mistakes in smashing it.

The fight was really similar to the 8lber, the fish didn’t go on any runs or try to use the current, just more head banging and trying to dive down to the boulders – there was one in particular that had me worried as it was nearly touching the surface by now, but I had faith in the leader and this was rewarded with another relatively stress-free landing! 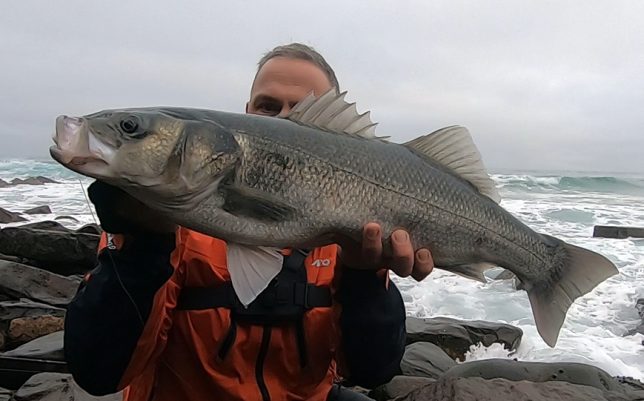 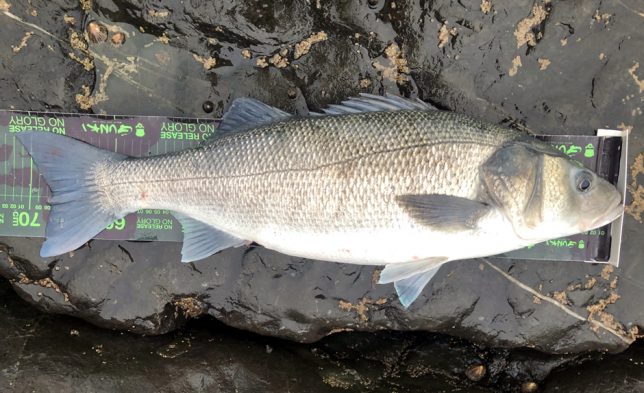 This fish was a real Sherman tank, and  reminded me of those big fish landed by Grant.  On the measure it showed a slight improvement at 72cm, but with its build would have weighed a good bit more than the previous fish, perhaps even breaking the double figure barrier.  I quickly released the fish, and carried on following the tide, discovering some incredibly amazing spots and ground.  Whilst I didn’t land any more fish, I did spot another bass – I was staring at a gulley trying to figure how to cross is when one around 6-7lb swam straight  through!   I went home feeling that the trip would now be classed as a success from a  fishing point of view, and with lots of confidence to return here Saturday and see if there were more fish around.   Frustratingly though, that session was another blank – despite similar conditions and a better tide time.  It really was becoming apparent that there are not loads of bass around, but the size of them was certainly making the effort worthwhile. 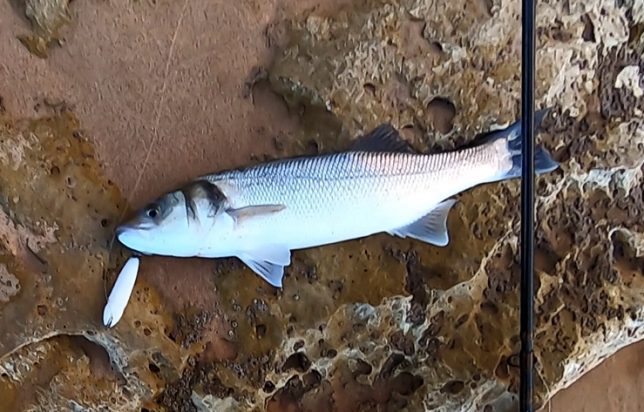 I really wasn’t sure about Sunday mornings session – the swell forecast was for 2-3m and the wind was now onshore.  I had an idea for a west coast spot that might be OK (in the area where I started the week) but when I woke I found that the wind was howling from the north west, so I took the decision to head to a south coast spot instead.  On reflection, I would perhaps realise that I was so lucky to have managed 6 days straight fishing the west coast, but was disappointed that I couldn’t get out there for my final session of the week.   This was a mostly sandy spot, with a few rocks – I fished all the way across the bay from right to left, starting way before dawn and I was half way back again before my 50g enticer was smashed at my feet in an 18” deep table of water – this fish was landed again without much trouble and I was pleased to avoid the blank with a nice 4lber.   The surfers were arriving in force now, so I headed back early to spend the day with the family. 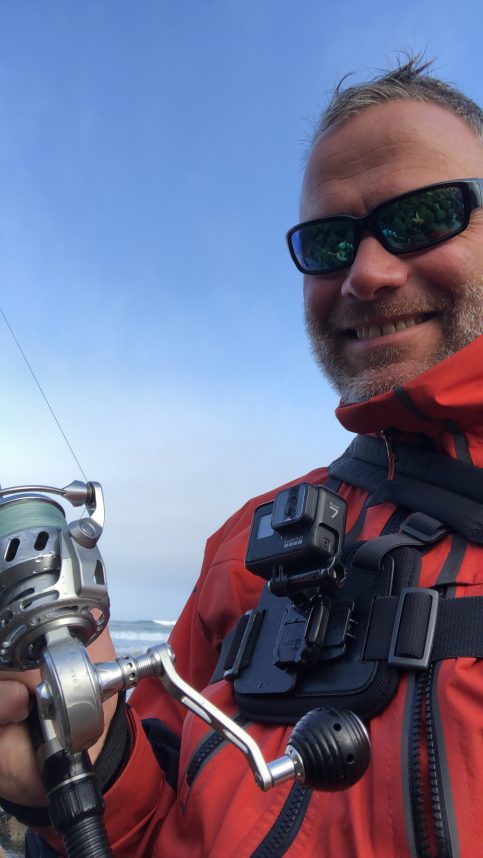 I’m now sat back at home,  with the fire lit, reflecting on the week and it has to go down as a success, I landed 7 bass from 8 takes (ignoring the missed topwater follows), the top fish 8.5lb ish, 9.5-10lb ish, and 3 chunky 3-5lb fish.  I would perhaps have hoped for small and medium sized fish and generally more bites, but I am happy suffering the blanks and long time between bites if there are big girls about.  It’s worth a mention again about the Samson lures, I was fairly sceptical before I went, thinking that I would do just fine on my usual lures, but as it turned out I really struggled with them, and the Samson’s became a go to.  They simply suite the heavy leader and rod employed.  The autumnal weather here has me thinking I will absolutely have to return – I think it could be an annual family trip (edit – i’ve just booked flights for next October.)   I’m also thinking of returning with some fishing mates, I wonder what a team of us could achieve fishing full time for a few days, I only managed a few hrs here and there really!  The lost bass, if indeed it was Dicentrarchus labrax (potentially could have been a Meagre perhaps?) will stay with me for a long time, I daren’t try to estimate how big.