Soft plastics are becoming a staple in every lure anglers box and as people adopt these high tech bits of plastics, whole new worlds are being opened to them. The versatility of soft lures is simply mesmerising and in many respects I find myself reaching for softies over plugs now when I venture onto a mark.

The range of plastics on the market is simply staggering, especially since most of our buying trends now seem to come from Japan, but we mustn’t forget our European neighbour’s – France! There was a brief period in U.K. lure fishing ‘history’ that we took our inspiration from French bass anglers and thus spawned the outbreak of the ‘red’ rods, Patchinko top water lures and the mighty X-Layer onto our coasts.

However, trends seem to move on and our focus seems to have shifted towards Japan for newer and shinier lures. I want to take the focus back to France though for this article and look at the concept of articulated soft lures.

What it’s all about?

Most of you will be familiar with the typical shad and jig head, were a soft body is attached to a fixed hook jig. Whilst, these are very effective, the fixed hook limits the fluidity of the soft plastic as it restricts roll and side to side movement.

An articulated style lure is one which has a pivot or hinge point between the hook and the weighted head which in turn allows for greater movement of the soft lure body.

They come in many forms some as simple as a ball weight with a loop, split ring and hook (open point or weed less) and others with highly complex link systems designed to produce a neat and tidy end result.

Of course, as you read this the majority of you will be thinking Black Minnow and correct, it is articulated, but this style of lure creation was not created by Fiiish – it was a concept which has been deployed in France for decades and simply brought to the wider angling community by some good marketing.

Here are some example of ‘off the shelf’, articulated, weed less soft baits:

Most of these lures have a suitable range in size, colour and weight to cover most of your angling eventualities be it from the boat or shore.

Glue is your new best friend!

I have heard lots of people complain about how these articulated style soft lures don’t stand the pace and get torn or ripped from the hooks. There are two things you have to accept when it comes to this style of bait. Firstly, they are soft in order to give the best action possible … a soft construction equals a more fluid motion. Secondly, you HAVE to glue the heads and the bodies together … it is paramount, not only to preserve the life span but to actually enable the lure to swim as intended.

My advice is to run down to your local shop and grab a few tubes of relatively inexpensive super glue and this will greatly enhance your lures performance and durability.

This tip isn’t just for articulated lures … I glue all my soft lure and jig head combinations together to make them last longer.

In terms of action, these lures tend to move more freely than those rigged on fixed point jig heads. Therefore, in my opinion, you don’t need to animate them as much … most of the time any water movement or current will be working the lure for you.

The articulated feature means that it has a more lifelike swimming action and it is that hinge or pivot point which enables the lure to move more freely.

For example, when working a standard shad on a fixed head I will often use quite a strong sink and draw style however, with an articulated lure such as the Illex Nitro Sprat Shad I will slow the imparted action way down to account for the increased movement of the articulated lure.

Big bass often don’t want to move around at high speed chasing hyper active bait … so having a nice, slow presentation can often help pick out the bigger fish. 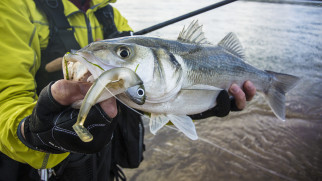 I find these lures work best when you have some available current either due to estuary style flow or offshore rips etc – this is when I think they come into their own!

From past experience, I tend to find the best results come when casting up current, gaining contact and allowing the lure to either bump or swing, just off bottom with the flow. In these circumstances I will barely animate the lure with my rod, perhaps just the occasional small lift … but that’s it! It’s about having the confidence that the lure is working without you having to do anything obvious to it … a but like Senko fishing in some respects although, these shads have a more visible and obvious action.

Of course, with a responsive lure rod and some decent braid you will be able to feel the vibrations being given off by the tail as it runs in the current … so you should always be aware of the lure ‘working’ so to speak.

Don’t be fooled though in thinking that these are a one trick pony … far from it! This style of lure can be applied in all sorts of lure fishing scenarios. Personally, I have used them from the boat for pollack in Ireland and also in serious tide races in the Channel Islands for bass.

From the shore they are perfect for current (as mentioned above) but with lighter heads, say 7g – 14g, they can be fished on straight, linear retrieves over rough, shallow water – and with most having a strong rolling action you effectively have a weed less version of a hard lure to work over the snaggy ground.

The possibilities are endless! 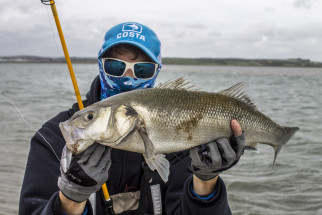 Something for next season?

I’m quite sure a lot of you will already have tried some of these articulated soft lures, but for those who haven’t had a dabble I would encourage you to get your hands on a few and give them some water time next season.

You won’t look back once you do!

©Images and text by Steven Neely.