Do hooked bass ever leap? In my experience, very rarely indeed. They commonly come to the surface and thrash about, creating, in the case of a good one, a spectacular splash. I remember one 7-pounder which persisted in trying to stand on its head, with tail and most of the body waving about in the air. An actual leap clear of the water in the manner of a sea trout, or occasionally mullet, seems to be extremely unusual. I can ﬁnd only three such occasions in my diaries. 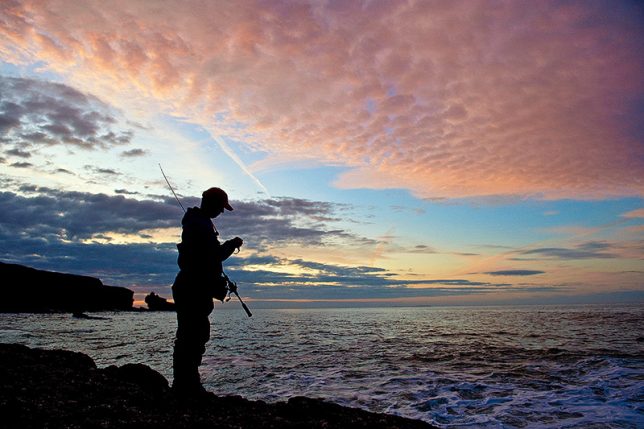 Hooked ﬁsh followed by a bass

This is much more common. I had my ﬁrst experience of it when ﬁshing for mackerel off the front of Berry Head. I had hooked a mackerel of about 3/4lb and as I brought it to the surface, it was followed up by about 50 good-sized bass in the range of 3 to 8lb. They clearly had designs on the mackerel and I let it stay with them. However, they found it a little too large for their appetites and soon sank back into the depths (it was about 40 ft deep there). I drew in the mackerel and after killing and gutting it, I took a sliver from its ﬂank and put it on the hook. I lowered it down to where the bass had disappeared. Nothing happened. After several minutes I wound in again and tried a smaller sliver. It was immediately taken by a small mackerel of about 4oz from the feel of it. As I was winding it up, and still out of sight, I felt a solid check and stopped winding. Clearly something bigger had engulfed it, hopefully one of those bass. I dared not strike because the No.3 hook might not ﬁnd a hold. Instead I simply let the ﬁsh go wherever it wanted, which was chieﬂy down to the bottom among the rocks. My trace was only 4lb and from the feel of things it was getting rubbed on the rocks. I maintained a very light strain and eventually after half an hour the ﬁsh came slowly to the surface. Despite the very light pressure it seemed quite tired out and I was able to net it, a bass of 4lb 8oz. It was my birthday and fortune had certainly smiled. When I tested the trace it broke at 8oz. 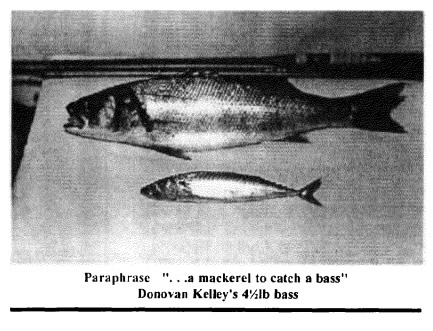 A rather similar occurrence happened when I was ﬂoat-ﬁshing for bass with live prawn. As I drew a nice one of 4lb to the net, some 30 others came up with it, attacking the ﬂoat and lead. I netted my ﬁsh quickly and got another prawn out, but I had no more bites. Three years later, on a west Cornwall beach, a bass of 6lb was followed for about 5 minutes by a rather smaller ﬁsh. It came right in to where I was standing, in 4 inches of water, before turning away. Later that year on the same beach, a 2lb 8oz bass was followed in by two others. In each case the hooked ﬁsh was one of a good catch taken, and bass were present in numbers. In the following year, wrasse ﬁshing in south Cornwall, a good wrasse was followed up right to the net by a 3lb bass.

In two other cases a bass, each part of a good catch once again, was followed to the net by another of similar size to the hooked ﬁsh (about 5lb). More recently, mackerel ﬁshing again, I hooked another chance bass of about 2lb which was followed in to the rocks by two of about 5lb. In trying to net the bigger ones I managed to lose the 2-pounder! (Served me right).

There may have been other cases which I have not seen due to water conditions or lack of light, but for the cases I have seen I think that the follower-ﬁsh is looking for food.

Bass attacking the ﬂoat or lead

On one occasion ﬂoat ﬁshing with prawn, a bass of about 3lb seized the spiral lead as I was winding in – and remained effectively gagged for a few seconds. When it let go it promptly seized the prawn and was duly landed. In another case the ﬂoat was the target while lamp ﬁshing on a quay near Falmouth. The bass made repeated attacks at the ﬂoat but steadfastly refused my ragworm bait a few feet below. 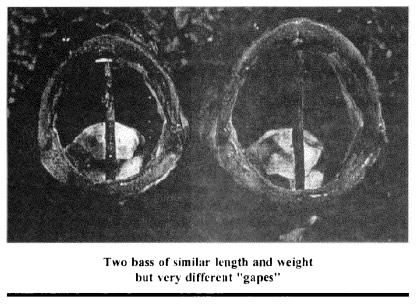 Not often does one have the privilege of seeing this. It has happened to me just twice, once by day, once by night. In the ﬁrst case I was ﬁshing from a high rock at the mouth of a small Welsh estuary. The rock towered up behind my perch, and with that background I would not have been seen by any passing ﬁsh provided I kept still. It was a sunny day with calm clear water. My king rag bait was about 40 yards out in the channel. Presently I saw a bass of about 5lb, weaving its way slowly up the channel close to my rock. Then I saw another about 10 yards to its right, and more faintly, another beyond it. I got a clear impression that a hunting group of bass was spread out right across the 100 yard-wide channel. My impression was conﬁrmed when my bait was seized, and in due course I landed a ﬁsh of 4lb 12oz. I think their stealthy approach, each weaving from side to side to cover all of the ground, was aimed at crabs – hoping to catch them napping before they became alert to a hostile presence and buried themselves. Crabs are numerous there, and I always knew when bass were about because the crabs would suddenly stop stealing the bait.

On the other occasion I was wading in about 3 feet of water in my local Cornish estuary. It was a dark night, normally good for bass but not this time, as there was extreme bioluminescence in the water. Several times I saw ﬁsh (probably small bass) darting through the water in pursuit of prey, and leaving a brilliant trail of ‘ﬁre’. Then suddenly there seemed to be bass everywhere, bigger ﬁsh and, as on the Welsh occasion before, spread out in a loose phalanx. They were moving faster than the Welsh ﬁsh, probably chasing sandeels. A spectacular sight, one minute all around me, the next gone.

Bass are very robust ﬁsh – a fact repeatedly driven home in tagging experience. Like all ﬁsh they have their parasites, but these are rarely on a scale likely to discomfort them. They are found chieﬂy in the roof of the mouth (a type of sea louse), in the gills, and in the walls of the abdominal cavity (small worms, just under the surface of the walls). With ﬁrst year bass, severe damage to ﬁns and loss of scales can occur in their ﬁrst winter if it is a cold one, and if they have not made good growth in the summer, mortality often follows. Just once I have caught a larger bass, about 1lb, which had nearly all its scales missing. In other respects it seemed quite ﬁt, and it swam off smartly when released. Rather more alarming was the case of another juvenile which I laid on the sand while I unhooked it. On lifting it off the sand to release it I found that all the scales on that side had stayed on the sand. 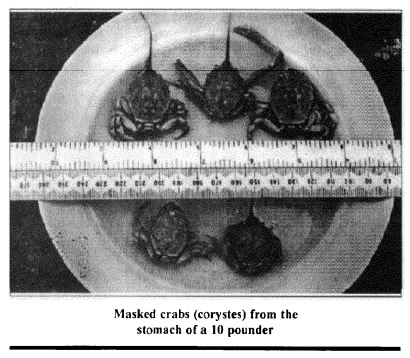 Injuries are rather more common than illness. I recall one which I indirectly caused while tagging in Anglesey. The ﬁshing had been poor but suddenly I started to get bites. I caught one of about 3lb and put it in a nearby rock pool while I cast out again in the hope of another. Leaving the rod on the sand, I tagged and released the ﬁrst ﬁsh when I noticed that there were several shags diving where I thought my bait was. I wound in and found that I had another ﬁsh of similar size, but completely lifeless and untaggable. On the ﬂank were two bleeding wounds, and two more on the belly. I have known other cases of shags attacking bass up to about 3lb. That juvenile which left its scales on the sand had two small circular wounds which were probably caused by the shags.

Deformed bass seem to be very rare. I can recall only one, a ﬁsh of 2lb 8oz with a 30° bend in its backbone at the shoulder, giving it a hunchback appearance. Variations in morphology are fairly common, for example ﬁsh of the same weight having very different mouth diameters when fully open.

Opening the stomach of a bass caught in shallow waters will usually reveal crabs, sometimes sandeels or other small ﬁsh, and sometimes shrimps or prawns. In juveniles shrimps tend to predominate. Bass are, however, opportunistic predators and one often gets a surprise on opening one. Some of the discoveries that have surprised me are:

Historical note: This article was published in BASS magazine no.85 February 1998