During the last ice age the glaciers that started high up in the hills gouged U-shaped valleys from the ancient Cambrian rock and, moving remorselessly down towards the frozen lowlands, carried great boulders and stones along with them. When the climate changed and the land became more temperate, the glaciers melted and released their entrapped rocks. At the same time the sea level rose so that the glacier debris was submerged to form reefs extending many miles out to sea. These great natural havens were colonised by the smaller marine flora and fauna and so became a hunting ground for the predatory fishes. 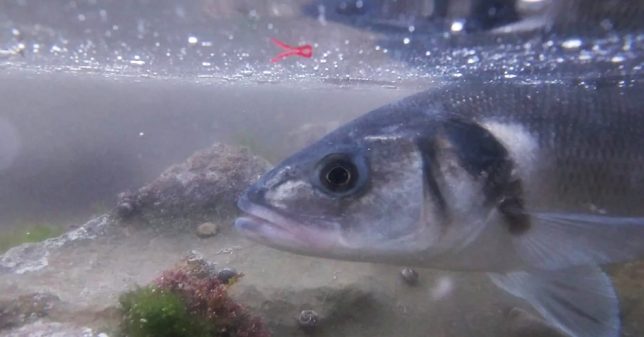 The reef has been host to a great variety of fishes whose species not only change with the seasons because of migration, but also with the gradual climatic changes which occurred with the passing ages. During the period of the warm shallow seas the cold water inhabitants retired northwards and their place was taken by the more colourful tropical and sub-tropical species. In time the pendulum again swung the other way and currently the temperate waters which daily flow over the reef are maintained by the North Atlantic Drift, at a temperature acceptable to Mora’s species throughout most of the year.

Due to a quirk of the tides that sweep over the reef a series of powerful eddies has thrown up a hogs back of graded stones half a mile to the south of the reef and extending from the high water mark for two miles out to sea, then to curve round into an arc and finally meet the reef. Within the natural sun-warmed shallow lagoon so formed gather the small fishes in their teeming millions to feed on the rich plankton. On the scoured bed of the lagoon the sandy bottom near the shore gives way to low weed-covered rocks which harbour the growing crab and mussel populations. All summer long Mora had fed on the crabs she had found plentiful under the weed and rocks. Now, as summer gradually gave way to autumn, Mora was in search of food for a longer period than any other during the year, often continuing late into the night when it was easier to catch her prey, which moved into open water under cover of darkness. On nights when the moon was full she would swim in the clear waters and take the sandeels that were clearly silhouetted above her, twisting and turning in the overfalls.

Everything on the reef was on a grander scale than Mora had known in the littoral zone. She swam in and out of the kelp beds and amongst the acres of bootlace weed which bent gracefully to the pull of the tides harbouring a great larder of newly hatched fry. She found in her journeying the sinister green wrecks of sailing ships which had foundered over the centuries when they had become trapped on a lee shore during the sudden gales which spring up in the autumn. The hulks were the home of the conger and the cobalt-blue lobsters, and Mora quickly learned to keep to the open water and not hunt where other mouths were quietly waiting a passing meal.

Sula, the gannet, had been on patrol since just after dawn and had ranged over 60 miles from his island nesting colony off the Pembrokeshire coast. He was looking out for the mackerel shoals and over the reef he closed his wings and plummeted into the sea to take a fish from the shoal that was being hunted by porpoises. Mora saw him explode into the water and take a fish in his beak. She had been startled by the passing overhead of a dense shoal of mackerel, their streamlined bodies flashing through the water and their iridescent bellies giving a rainbow effect to the bright surface layers of the sea. Following them and swimming even more rapidly were three porpoises, working as a team and cutting out mackerel from the main shoal and slashing at them in a frenzy of feeding. The impact of their powerful flukes and the displacement of their bodies sent shock waves through the water which frightened Mora into taking cover amongst the rocks. Wounded and dying fish drifted down to the sea-bed to be taken by the waiting conger and tope or to disappear beneath an ever-growing gathering of crabs.

When Sula dived again and again on the mackerel shoal, he was seen from many miles distant by his companions, who flew together with the ever attentive gulls to share in the feeding. The birds followed the racing shoal along the coast and gradually the reef settled down again to its normal rhythm. Mora had witnessed killing all her life but the sheer speed and fury of the attack she had just seen was a warning of the hazards to be faced in the offshore waters. When Mora swam back to the estuary on the evening tide she was conscious that the experience she had shared with her companions signified a new phase in her life. Mora had grown up.

Up in the Arctic Circle near Greenland, nature’s weather kitchen was brewing the autumnal gales and at the period of the equinox Mora sensed a gradual change in the season. With the big spring tides a new water came from far off, an unsettling, powerful swell carrying a message from the distant oceanic hurricanes. The weather in the bay had been settled for many weeks, only now and again there came dark, low clouds which shed their heavy rain on the water. Lightning flashed and the rumbling thunder rolled around the land mountains sending great vibrations through the inshore waters. Mora read these portents and knew that the time of the heavy feeding would soon be over, the sea would cool and the gales disperse the remaining schools of fry. The layers of fat that she had built up would have to carry her over the lean winter months to follow.