At this time the tenants of the reef changed as some of the summer visitors, who had come there to spawn, departed on their winter migration to warmer southerly waters. Others, following the shoreline until they tasted the waters of their parent river, came to run up the short flash streams where they were born, to shed their eggs and milt on the redds and in the feeders. Despite the changing population the ecology of the reef remained in perfect balance throughout the year and would continue to do so, provided that no outside agency disrupted that balance. 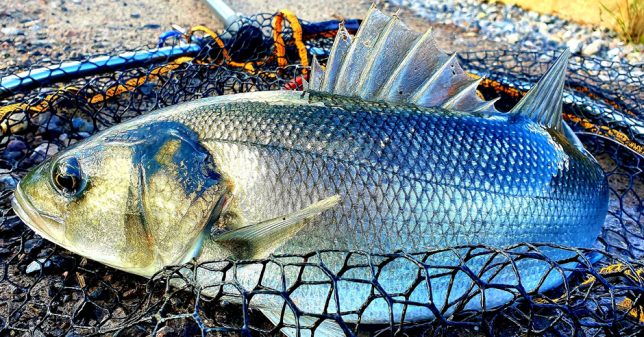 Being an area of unpolluted sea water the reef is a nursery for mussels, and every year when the old timbers are covered with a black wig of the tiny bivalves, there came the black bream shoals. With their special form of teeth adapted for picking infant mussels from the rocks, these acrobatic little fish feed alongside the mullet and wrasse and, having spawned, depart before the water cools. The migrating salmon return from the rich feeding ground to await the autumn spates. Their smaller cousins, the sea trout, do not venture far away from the coast and the reef sees them feeding on the brit and sandeels all summer long and then, as autumn comes, they line the bar at the mouth of the river and on a suitable tide swarm upstream on their short journey. Eugaleus, the tope, in late autumn departs to deeper offshore waters; following perhaps the migrating mackerel shoals.

So the reef, whilst being a host, haven and graveyard to many, continues to be the backbone upon which a marine society is built, supporting a sufficient population to be nourished on the feed available in each season.

They had all sensed the coming storm, and by the piles of the railway bridge, far upstream from the estuary mouth a battalion of bass kept station according to their seniority. Mora lay in midwater some 20 yards below the stanchions, as befitted her size and age, her fins moving slowly in the current so that she lay always at equal distance from her companions of the shoal. The ancient teak piles had, over the years, acquired a cloak of acorn barnacles and mussels and a flowing mane of wrack. In the eddy of the easy water the elders of the local bass community rested their broad backs just beneath the surface. These were great fish which, though capable of swimming with ease in the most powerful overfalls, took refuge before the storms of autumn to avoid the choking sand and weed that would quickly fill the bay.

The wind rose as the storm came in from the southwest, drying the surface sand of the beach and blowing the cutting grit to smother the marram grass and sea holly on the dunes. The spume was blown from the curling tops of the lines of breakers and all the sea to the horizon was in a white fury as the wind strength increased. Beneath the surface of the angry sea all became opaque. On the reef the summer’s growth of weed, having lived its span, was torn from the sea-bed and rolled into the shore to be thrown up the beach. The turbulent sea lifted the oar weeds, complete with their anchor stones, and cast them, too, along the high water mark. Some tenants of the littoral zone which sought refuge under the great boulders were sucked out by the pressures of the undertow, themselves to be cast dead or dying amongst the other flotsam. The gulls would find them when the tempest subsided.

When the wind had blown itself out the lowering skies gave way to a patchwork of blue, and the sun came through to survey the scene. Gradually the sea eased down allowing the suspended sand to settle, and the aftermath of the storm was a signal for the bass to move out of the estuary to feed heavily in the surf and inshore waters on the many creatures that had been turned up by the turbulence. Mora moved right into the cream of the surf to take the succulent sandhoppers and sea slaters that were in the seaweed washed up by the high tide. Shrimps and sandeels, disturbed by the crashing breakers, swam in the cloudy water and were easy prey for Mora.

At this time of the year there came to the coast the Upright Ones to fish the surf and catch bass on rod and line. Some fished with worms and soft-backed crabs lying on the sea-bed, others, more deadly, waded into the surf with artificial lures. Mora was chasing sandeels when she saw ahead of her the flash of a wounded fish, darting and turning. She sped to take it and when it was in her mouth turned away from the shore. She was slowed in her swimming and felt at the same moment a sensation in her mouth. The fish she had taken was hard, and feeling some resistance Mora swam swiftly along the shoreline with the tide, but the pull continued and she could not beat it.

Turning, she swam uptide and the pull eased a little and then came back stronger than before. Mora panicked and dived for the weed, trying, trying hard to make the rocks but unable to beat the pull on her head. She came up to the surface and fought hard this thing she could not understand. One more dive to the sea-bed and this too failed. She felt tired and so, cruising from side to side came towards the shore. In the shadows Mora suddenly saw a blurred shadow looming over her; she made a lunge for the open sea again, only to be halted by the irresistible force that tired her and pulled her ever towards the shore. She saw the net go under her and, powerless to resist, was lifted from the element she had never before left.

Her eyes were dazzled by an intense light and her body felt uncomfortable. Careful hands, already moistened, lifted Mora from the net and the angler removed the hook as gently as possible. He held the little bass and admired the beauty of form and silver scales. Quickly taking a tag the angler attached it without delay. Mora did not know what was being done and felt only the discomfort of being out of the water.

The angler noted her size, a shade under 3lb., too small to be kept for the table. After he had attached the tag he returned her to the water, saying to her, “Go my little one, grow big and don’t be silly and get caught again; you may not be so lucky next time.”

Turning to his companion the angler said, “Tom, why can’t we protect species of fish that are in the front line for extinction around our coasts just like they do birds?” Because they live in a different element and we can’t see them we don’t care. If they sang songs in the garden every old lady in the country would want to help them.

“If we do anything we’d better do it quickly before the pair-trawlers come and sweep the lot up in nets. That is, if gill netters and thoughtless anglers haven’t seen them off first.”

Mora swam away into deeper water. It took sometime for her to recover. She found the shoal again and off she went hunting; she turned and took a sandeel. Mora hadn’t learnt a thing.