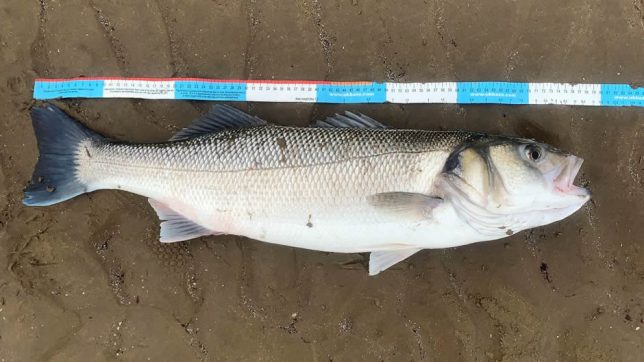 Like any species, bass growth is dependent on a host of environmental and genetic factors. Just like tall human parents almost always produce tall children, bigger, faster growing bass are extremely likely to produce offspring with the same traits. We know that bass are a slow growing species compared to other fish and a bass of around 42cm is likely to be around 7 years old if it comes from UK waters. So, this means that bass grow about 6cm a year, right? Well, it is not as straight forward as that since growth rates slow with age just like in other species.

We recently heard of a fascinating tagging recapture of one of Sean Jordan’s* bass:

That’s, 432km away and an increase of 17cm in just over a year and a half. Is this an exceptional amount of growth? Well, it might be but, by travelling south the fish would have spent time in warmer water which is known to increase growth rates of captive bass (J. Person-Le Ruyet, Aquaculture, 2004) and thus would very likely had the same effect here.

If the bass in question is the offspring of fish with genetics that predispose to a slightly faster growth rate and then also consider that a good source of food was available (maybe it followed an abundant prey south, hence moving over 400km from “home”) then the increase in length doesn’t seem too far away from the norm. Of course, to be able to conclude one way or another, there would need to be a strong set of data from fish that have made similar journeys and ideally, water temperature data also.

More anecdotal evidence but interesting nevertheless, was the record of an exceptionally large bass caught by Said El Habchi in the warm waters of Morocco, a few years ago. The fish was over 20lb and apparently 24 years old – much larger than its UK equivalent which would only pass 10lb at 20 years of age. What a difference!

If you would like to contribute to the data we have on the bass that swim in our waters, act now and join the BASS Catch Recording Scheme.

Author: A combination of material posted on the BASS Members’ Forum in April 2022 by Robin Bradley (BASS Science Group Lead), Martin Waller and others.

*Sean Jordan is a Saltwater flyfishing guide/angler posting as saltassassin66 on Instagram.