BASS was formed by bass anglers in 1973, in response to increased levels of commercial fishing and concerns about the damage this would do to bass stocks and bass angling.  Since then, BASS has been the leading force in the campaign to make the bass fishery sustainable and for bass anglers to have priority in the bass fishery. This campaigning and lobbying work is funded by membership fees and by donations – if you value this work, please join BASS and/or make a donation:

In June 2013, the scientists at the International Council for the Exploration of the Sea (“ICES”) produced their first ever analytical assessment of the bass fishery and noted that the rate of mortality due to commercial fishing was unsustainably high and that the SSB (the Spawning Stock Biomass) had been declining since 2005.

Since 2013 the bass stock has declined at an alarming rate. 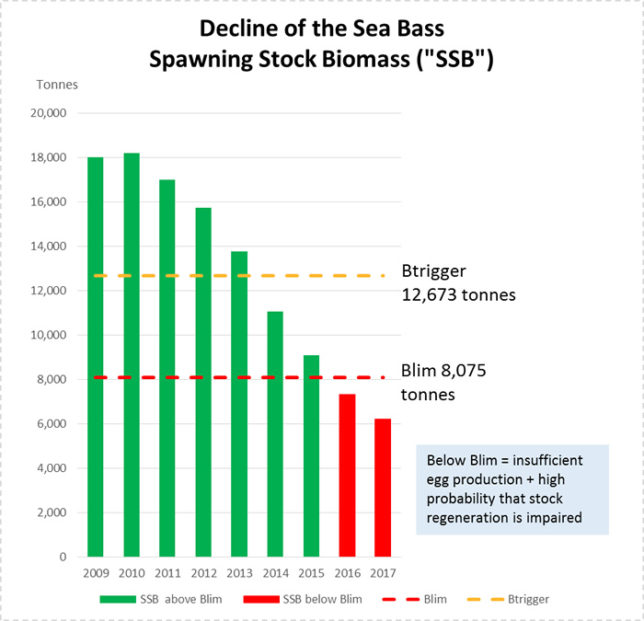 The scientists say that management measures need to be taken once the SSB falls below 12,673 tonnes and that once the SSB falls below 8,075 tonnes there is a high probability that the stock’s ability to regenerate itself will be impaired due to insufficient egg production. Sadly, the current SSB is just now 6,414 tonnes – the EU Fisheries Ministers and the EU Commission failed to act quickly enough.  The risk now is that, even if fishing is much reduced, the stock may fail to recover and remain depleted for an extended period.

December 2014 was a critical date for bass.  Following our lobbying, the UK Fisheries Minister, George Eustice, broke the deadlock on bass management measures by making a unilateral request to the EU Commission for emergency measures to prevent pair trawlers targeting bass spawning aggregations.

Since then, our pressure on the EU Fisheries Ministers and the EU Commission has resulted in many more bass management measures. In 2018:

But bass anglers have not been immune from restrictions and at times we have had the rough end of the stick, despite being the most sustainable form of bass fishing and delivering far greater environmental, social and economic benefits than commercial fishing. In 2015, we were restricted to a 3 fish per day bag limit. From 2016 the bag limit was reduced to 1 fish per day for 6 months of the year. And now in 2018, we are trying to overturn proposed legislation that would stop us from taking a bass for the table but would allow commercial fishermen to continue landing and selling bass – a privatisation of the bass fishery.

As well as campaigning to save the bass stock, BASS is working on a Long Term Management Plan that would deliver a rich, vibrant and sustainable bass fishery.

In 2015, Save Our Sea Bass (“SOSB”) was formed as the campaigning arm of BASS, with the goal of raising awareness of the plight of the bass stock, enabling the public to get their voices heard by the EU Fisheries Ministers and the EU Commission and holding them accountable for their mismanagement of a publicly-owned fishery.  SOSB is resounding success story, with more and more people joining our campaign every day: signing petitions; writing to politicians and the EU Commission demanding that they take drastic action to put the bass stock back on the road to recovery and give priority to sustainable fishing.  To find out more about SOSB and its campaigning work, please visit its website: www.saveourseabass.org 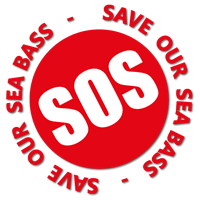