Tagging appeals to the naturalist in us all – it opens a window of opportunity for us to discover where fish go when they are not here. It is also an invaluable tool for scientists to unravel the mysteries of fish migration, and to understand the dynamics of fish populations. Tagging has a well-documented history in the study of bass migrations. Early work by Donovan Kelley and Kennedy & Fitzmaurice in the 1970s, and later studies by CEFAS and its predecessors established our current knowledge of the seasonal migration patterns around United Kingdom and Ireland. 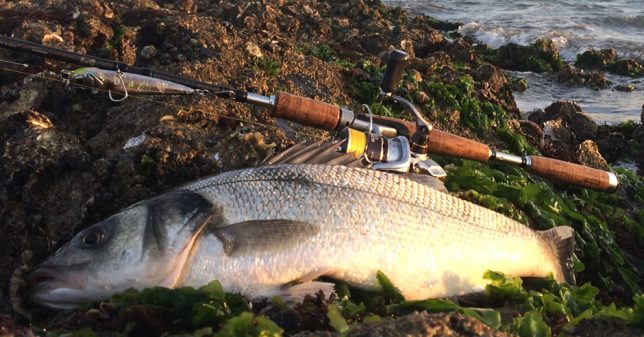 In the late 1980s and the 1990s there was a steady increase in the commercial exploitation of bass by pair trawling in the western English Channel. This fishery was originally discovered by French commercial fishermen, but as the technique became more widely known, boats from England and Scotland joined in.

By the mid 1990s UK anglers and inshore commercial fishermen became increasingly concerned about the scale and impact of this fishery, as larger bass disappeared from their catches.

With the publication of the CEFAS report Offshore bass Fishery, Pilot Study Report M0802 documenting catches in this fishery between January and March 1999, there now appeared to be relatively few large fish in the spawning stock – a cause of serious concern for anglers.

B.A.S.S., supported by the National Federation of Sea Anglers and the European Anglers’ Alliance, mounted a letter-writing campaign targeting both MPs and MEPs. The aim was to focus the attention of both MAFF and the European Union on our concerns, and to ask for scientific studies that would investigate this whole fishery and its impact.

When CEFAS proposed this study, they listed the following objectives:

In order to achieve these objectives it was necessary to arrange for large numbers of fish to be tagged both in the offshore grounds in winter, and in the inshore fisheries in summer.

Staff from CEFAS tagged a total of 582 fish from Scottish vessels operating in the Western Approaches during March 2000. These fish varied from under 1kg to over 6kg.

Staff from IFREMER in northern France accompanied French pair-trawling vessels and tagged 65 fish from the Trevose Head grounds, (off north Cornwall) and 122 in the Western Approaches.

Mike Pawson and Graham Pickett of CEFAS approached B.A.S.S. for their support in tagging fish of 1kg and over from the inshore summer fishery. B.A.S.S. agreed to cooperate providing that the information was shared openly and honestly, and that the two bodies could publish their findings independently. I volunteered to act as the B.A.S.S. Tagging Coordinator and Lisa MacLeod (CEFAS) managed the data including the bass tagging 24 hour Hotline.

A number of members were trained in tagging methods and formed their own angling teams. Fifteen sites were established around the United Kingdom, Channel Islands, Ireland and France. A total of 585 fish were tagged by our members during 2000.

To complement member’s efforts, a number of commercial fishermen and charter boat skippers also participated in the venture. That aspect was managed by CEFAS. They tagged a further 216 fish during 2000.

Details of tagged fish were compiled monthly, and exchanged between ourselves and CEFAS. The information was placed on the CEFAS website.

The tags were large internal/external anchor tags which allow the fish freedom of movement, have good retention properties and are quick and easy to apply. They consist of a yellow or orange plastic streamer 105mm long, bearing a unique serial number and a message printed in English and French requesting recapture details to be returned to CEFAS or IFREMER. Affixed to the end of the streamer was a plastic retention piece. The tag was attached to the lower flank of the fish by removing a number of scales in a specific position and making a small incision with a scalpel. The retention piece is then inserted through the body-wall of the fish. This was a difficult task to complete when taking into account a lively fish, cold and wet hands, and darkness on the beach or a rolling vessel at sea.

At the start of the study Australian-made IEX/WAD tags were used, which had a short nylon sheath as the retention piece, bonded to the streamer. Part-way through the study, these were superseded by a ‘New York’ pattern developed for the American striped bass fishery (see photo). This tag has a pivoting T-bar made at an angle, which makes it easier to insert and involves a smaller incision.

Two fish recaptured off South Wales in June and July had been tagged close to Start Point, South Devon. One was recaptured by a commercial rod & line fisherman, and the second, in deep water, by a beam trawler out of Milford Haven. While people may have felt that their fish were from a local Celtic Sea stock, this shows that they were, in fact, part of a larger population.

A winter-tagged fish recaptured by a French trawler in deep water between the Isle of Wight and the Cherbourg Peninsula was landed in France. The tag information was returned to CEFAS via IFREMER within ten days.

Most of the summer-tagged fish were recaptured close to their tagging sites. Alan Vaughan saw his first fish tagged in south Devon recaptured 8km further down the coast, two months later, by a another angler.

Mike Ladle was informed that a fish tagged by him in Dorset, had travelled 22km down the coast to be caught by a commercial rod & line fisherman.

Andrew Syvret was amazed when a fish that he had tagged in Jersey in September was caught by French sole netter close to the beach at Arcachon in the south of the Bay of Biscay, almost exactly two months later to the day. This fish had travelled more than 1,200km.

Donovan Kelly tagged a bass on one of the north Cornish estuaries during late August. It was recaptured in the Eddystone area, South Devon, just before Christmas.