Let’s fast-forward to autumn 2002, and things have moved on. Over these last two years, a total of 2553 bass over 1kg have been tagged by our members and CEFAS scientific staff. Most of these fish were tagged during the summer and autumn periods of 2000 and 2001, in eighteen inshore areas around the coasts of England, Wales, the Channel Islands, and Ireland. I continued to coordinate the tagging done by our members in their small teams. I liaised with the coordinators, collated the information provided by them, and forwarded it on to CEFAS. 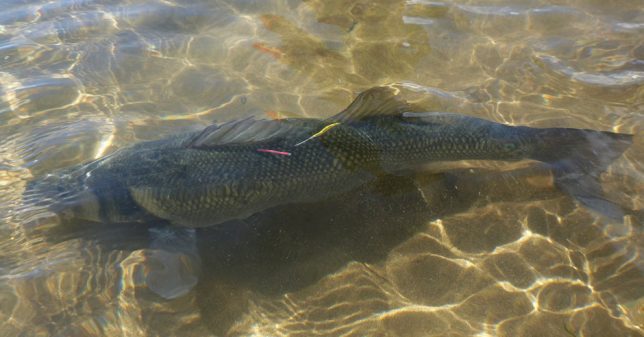 CEFAS staff went out on commercial fishing boats and tagged bass, inshore during the summer and in the southwest offshore fishery during the winter.

CEFAS scientists and B.A.S.S. kept a database about the tagged and released fish. This included information on recaptures. It was part of my role to inform both coordinators and individual members when a fish that they originally tagged is caught again, whether by commercial or recreational means. Because the actual tagging part of this study is completed, the main emphasis now is on the information that recaptures provide.

At this stage it might be useful to reiterate the aims of this project. It was to show, by the pattern of recaptures of tagged bass, the current geographical range and movements of the bass population in northwestern Europe, and to identify the areas and fisheries in which these fish occur when they are feeding in summer or spawning in winter. It is in this context that recapture information is so valuable.

During March 2000, 774 bass were tagged aboard United Kingdom and French pair trawlers in the English and Bristol Channels. Eight of those fish have, so far, been reported as recaptured. Seven of them were caught, during the summer, at locations ranging from South Wales to the eastern English Channel.

During the summers of 2000 and 2001, 1787 bass were tagged inshore along the English and Welsh coasts. 169 were tagged along the Irish coast. Up to the end of September 2002, 140 recaptures have been reported from these releases. Nine of the recaptures occurred in the western English Channel offshore fishery; five off the western coast, and four off the south coast of England.

Whilst tagging by UK and Irish anglers, and by UK commercials, has ceased at the end of 2001, it has continued during the spring of 2002 by French offshore vessels in the Bay of Biscay, the western English Channel, and Celtic Sea. They have, in that period, tagged 1600 more bass. So far only two of these fish have been recaptured in the UK fishery area.

Of the fish tagged in summer feeding areas, most recaptures have been made fairly close to the original tagging point, and between the months of April and December. Robert Bankhead, Neil Fluke, Ian Williams, Alan Vaughan, Robert Bradley, myself and others, have caught bass almost to the same day they were tagged and released in previous years. Some fish were recaptured in these inshore areas as late as February. This is in marked contrast to the results of earlier tagging studies undertaken in the 1980s, when no inshore caught fish were recaptured inshore after November. However, our results so far do show that from November onwards, an increasing proportion of recaptures are made at least thirty-five miles south or southwest of the point of tagging. Final and formal analysis of the data has yet to be done, but it would appear that most adult bass move significant distances to winter feeding and spawning areas, offshore, around southwest England. There have always been reports of anglers catching large bass at various inshore locations throughout the winter, and this, together with the later tagging recaptures, might suggest that not all adult bass are involved in these migrations.

Each tagged fish recaptured is like a message in a bottle, providing another piece of the jigsaw. The results, in terms of all recaptured fish to date, will be formally analysed and then compared to the results of Donovan Kelley’s tagging research carried out more than twenty five years ago. However, recaptures will continue for years to come; some perhaps confirming what we already know, and others adding to our knowledge base.

Looking further in to the future, it is hoped that data storage tags will come into use. These contain a microchip that will record, on a 24 hour graph, light conditions, depth of water, and tidal conditions in which the tagged bass has moved. There will be a record for each day that the fish has been at liberty. We can then learn much more about the habits and movements of bass.

Many thanks to the members who participated. Your enthusiasm was remarkable, and your contribution immense.

As at autumn 2005, 197 fish have been recaptured. The following map shows the releases and captures. A scientific paper on the whole tagging. 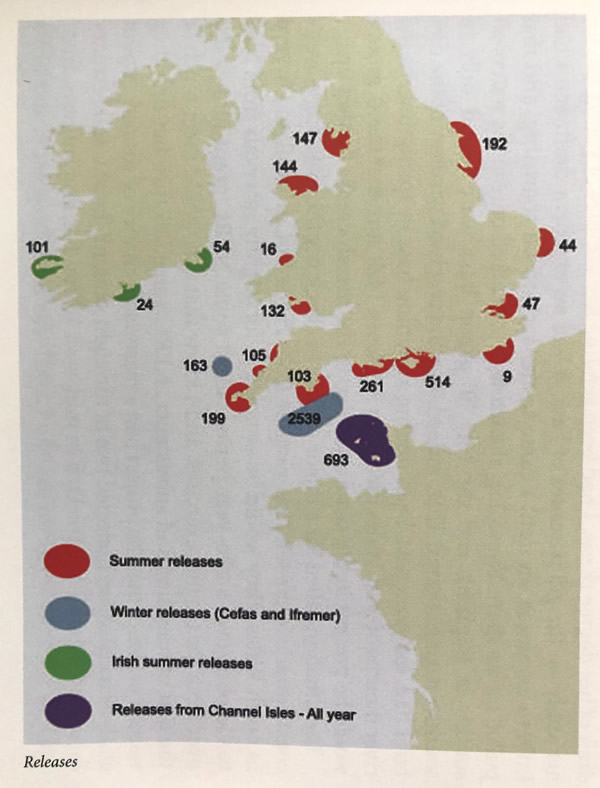 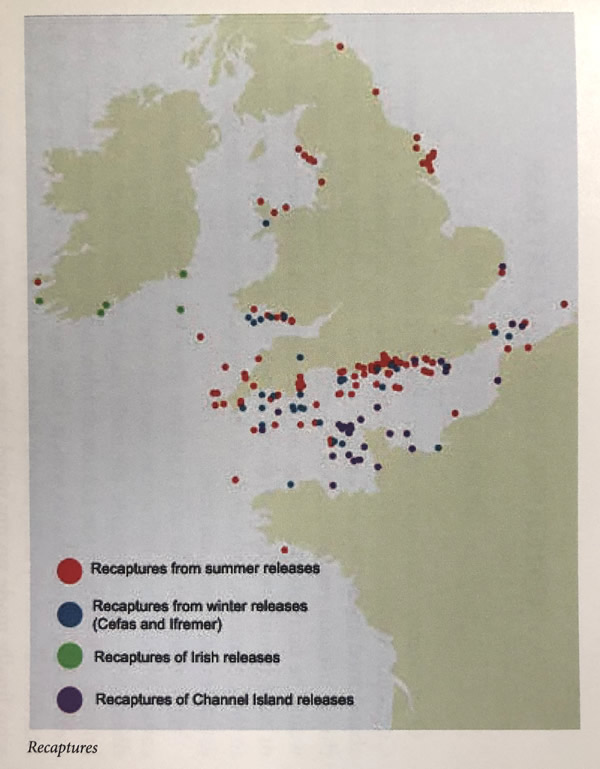