Tagging appeals to the naturalist in us all – it opens a window of opportunity for us to discover where our fish go when they are not here. It is also an invaluable tool for scientists to unravel the mysteries of fish migration, and to understand the dynamics of their populations.

Tagging has a well-documented history in the study of bass migrations. Early work by Donovan Kelley MBE and Kennedy & Fitzmaurice in the 1970’s, and later studies by staff from the Centre for Environment, Fisheries & Aquaculture Science (CEFAS) and its predecessors established our current knowledge of the seasonal migration patterns around UK and Ireland.

In the late 1980’s and 1990’s, there was a steady increase in the commercial exploitation of bass by pair trawling in the Western Channel. This fishery was originally discovered by French commercial fishermen, but as the technique became more widely known, boats from England and Scotland joined in.

By the mid 1990’s, British anglers and inshore commercial fishermen became increasingly concerned about the scale and impact of this fishery, as larger bass disappeared from their catches.

With the publication of the CEFAS report, Offshore Bass Fishery, Pilot Study Report: M0802, documenting catches in this fishery between january and march 1999, there now appeared to be relatively few large fish in the spawning stock – a cause of serious concern for anglers.

The Bass Anglers’ Sportfishing Society (BASS), supported by the National Federation of Sea Anglers and the European Anglers’ Alliance, mounted a letter writing campaign targeting both MPs and MEPs. The aim of this campaign was to focus the attention of both MAFF and the European Union DG14 (Fisheries) on our concerns, and to ask for scientific studies covering the whole fishery and its impact.

When CEFAS proposed this study, they listed the following objectives:

In order to achieve these objectives, it was necessary to arrange for large numbers of fish to be tagged both in the offshore grounds in winter and in the inshore fisheries in summer. 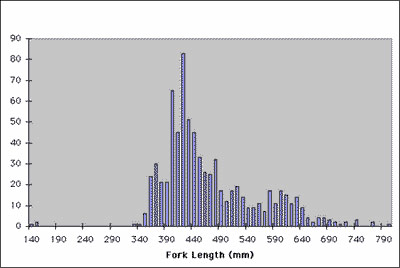 Staff from CEFAS tagged a total of 582 fish from Scottish vessels operating in the Western Approaches during march 2000. These varied in weight from under 1kg to over 6kg.

Staff from IFREMER Brest (the French equivalent of CEFAS) accompanied French pair-trawling vessels and tagged 65 fish from the Trevose Head grounds, north of Cornwall, and 122 in the Western Approaches.

Mike Pawson and Graham Pickett of CEFAS approached BASS for their support in tagging fish of 1kg. and over from the inshore summer fishery. BASS agreed to co-operate providing that the information was shared openly and honestly, and that the two bodies could publish their findings independently. John Leballeur volunteered to act as the BASS tagging co-ordinator and Lisa MacLeod (CEFAS) managed the data including the bass tagging 24hr Hotline (tel. 01502 524 526).

BASS members were trained in tagging methods and formed their own angling teams; 15 sites were established around the UK, Channel Islands, Ireland and France. A total of 585 fish were tagged by our members during 2000. 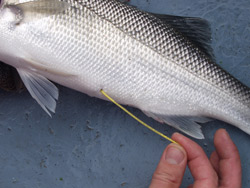 To complement the efforts of BASS, a number of commercial fishermen and charter-boat skippers also participated in the venture, managed by CEFAS, and tagged a further 216 fish during 2000.

Details of tagged fish were compiled monthly, and exchanged between BASS and CEFAS; this information was placed on the CEFAS website. The CEFAS website has now also been translated into French.

At the start of the study, Australian-made Hallprint T-bar tags were used. These are 10cm long, yellow nylon tubes with a nylon T-bar at one end. They are attached to the lower flank of the fish by removing a number of scales and making a small incision with a scalpel. The T-Bar is then inserted through the body-wall of the fish. This is a difficult task to complete when taking into account a lively fish, cold and wet hands, darkness on the beach, or a rolling vessel at sea. 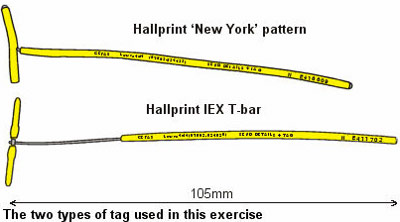 Part way through the study, these were superseded by a new Hallprint tag developed for the American striped bass fishery. This tag was completely covered in a yellow nylon sleeve. This uses a pivoting T-bar which is easier to insert and involves a smaller incision.

Both tags have individual serial numbers, and are printed in French and English giving return details for IFREMER and CEFAS.

The results to date

Some interesting details about recaptured fish include:

It is intended to continue the tagging programme through 2001 with some fine tuning. We hope that the summer tagging will include more locations including North Wales, and are actively seeking support from anglers in France, Holland and Spain. 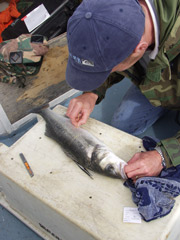 The autumn gales severely restricted bass fishing at the end of the 2000 season, but they should have helped safeguard the fish as they left the inshore summer fishery to travel to their winter grounds to spawn.

IFREMER have indicated their intention to continue with the tagging programme in the offshore fishery again this winter, although they had been unable to contribute to the summer tagging.

We started this tagging programme to prove whether the fish leaving our inshore sites are the same stock that is being exploited in the winter fishery. The tag returns in winter 2000-01 should prove or disprove this.

Possibly the results of the BASS restoration project efforts may have helped to influence the EU to commission a study of bass stocks by the International Council for the Exploration of the Seas (ICES). It is hoped that Holland and Spain will participate in this, together with Ireland, France and the UK. Mike Pawson of CEFAS will be the chairman of this study group.

We hope that our fellow bass anglers in Holland, France and Spain will also support further tagging studies to improve our knowledge of bass migration routes and to aid stock conservation for the future.

Never before have so many bass been tagged and released from so many locations in a concerted effort by such an experienced and dedicated team. We would like to say well done to each and every one of the participants. And we are all proud of the open and honest working relationship we have been able to establish with CEFAS.

[Note (added 2005) – One tagged bass (E416756) has become more important than a record fish. It was originally tagged by Tony Spiller on 24 may 2001, Tony caught the same fish fifteen months later on 21 August 2002 from almost the same spot. Thirteen months later on 17 september 2003, Tony recaptured the same fish, again from the same mark; and now, unbelievably, it has been recaptured by John Morgan on 21 August 2004, yet again from the same mark! It has become so well known locally, that it has been given a name – Billy!]

Details of the latest available tagging results are published on the CEFAS web site.