Bass With A Fly Rod

Bass With A Fly Rod

There is nothing new about saltwater ﬂy ﬁshing. Roman ﬂoor mosaics depict it, and long before that the Pharaohs used feather lures on the Nile. My friends and I pioneered this sporting technique on the North Wales coast in the 1960s and early 1970s, taking plenty of good ﬁsh each season.

Happily nature ordained that the dreaded alder bush and brambles do not grow near the sea, so one is unlikely to hear the anguished cries and bad language common to the river bank as the ﬂy ﬁsher of those waters loses his ﬂy on the backcast, and sinks slowly as his waders slowly ﬁll via a multitude of thorn piercings. 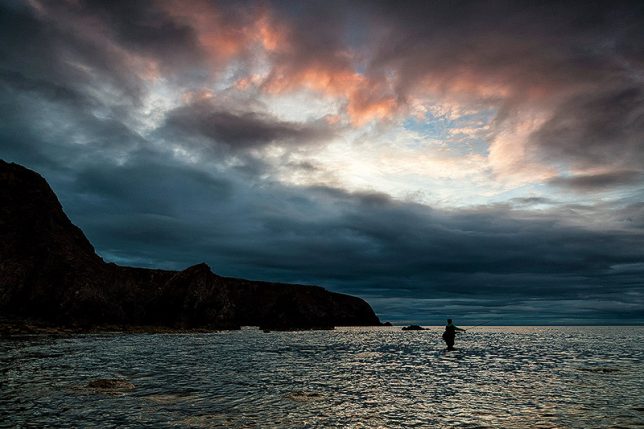 It all really started for us in the 1960s when we met a gentleman of advancing years who, each September would appear on the beach at dusk during the period of spring tides, clad in body waders (the old canvas jobs complete with heavy brogues), armed with a 14-foot double-handed Hardy Palakona salmon rod and a white ﬂy on a leader of at least 14lb. At the point he would wade in amongst the rocks and ﬁsh across the tide in the fast, fading light. He took ﬁsh, and we were astonished at the wonderful sport bass gave on this tackle. We were to learn a great deal from talking to him, which set us off with our own ideas, and the yarns he told us of the old days, when to hook ﬁsh of 12lb and above was not uncommon.

Saltwater ﬂy ﬁshing conditions are as variable as any found in freshwater. Lake and stream require different techniques and tackle, and likewise with the sea circumstances can change, often within minutes as tidal strength alters and the mood of the surface varies with the vagaries of the wind. Swells coming in over the bar of an estuary can also demand a change of tactics; and a different rod and leader will be called for when venturing from sandy areas to rocks.

One thing that can be said with relative certainty is that ﬂy ﬁshing for bass is a dawn and dusk operation, and we have found it most proﬁtable from late July onwards, when the sandeel and brit shoals are close inshore. An important distinction is where the angler is ﬁshing over rocky areas as against a sand, gravel or weed seabed. It is necessary to deal with this in more detail, but ﬁrst we must base our tactics on the type of ﬁght we expect from the bass. He is a surface and midwater ﬁghter and not a weed grubber like the pollack, although heavy ﬁsh will sometimes sulk under a rock or in weed. The more general run of four and ﬁve-pounders are more active ﬁghters and exciting ﬁsh to play on a ﬂy rod, and will put up a ﬁght the equal of a salmon of twice the weight. 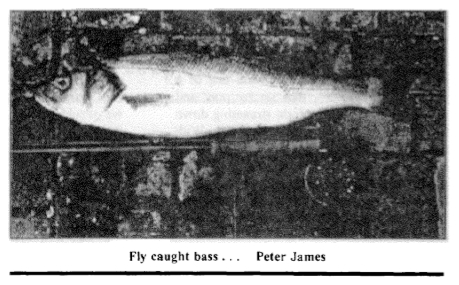 The ideal ﬂy water is from a headland tide race or a hog’s back of shingle and stone, with deeper weedy water on either side where the ﬁsh will work the downtide areas of the overfall, picking off the baitﬁsh as they are swept by. The mouths of estuaries and submerged reefs can also be excellent. A long rod and heavy leader are necessary on rocky ground to manoeuvre the ﬁsh away from obstructions and reduce the chance of a break if the leader brushes against the razor-sharp edges of acorn barnacles. Lighter gear may be used away from such hazards.

Tackle is a 9 1/2 or 10 foot reservoir rod with saltwater resistant rings. The rod should be on the stiff side as it is often necessary to punch the line into an onshore breeze which can be more powerful than breezes found inland. A shooting head is used to cover ﬁsh at maximum distance, the weight being dependant on the rod used. Common factors are the backing (20lb mono) and leaders, which we standardize on two; the heavier for rocky areas has a 20lb butt coming down to not less than 12lb at the point, and for clean water, 15lb coming down to a 7lb point, both about 6 foot long.

Water condition is important and we prefer the state of settling down after an onshore blow, with some colour in the water but after the weed has had time to settle. Flat—calm and gin-clear water is not so good. Bass are not mugs and can pick out a ‘wrong un’ every time. Furthermore, in rocky conditions they move much closer inshore and work the shoreline right in the foamy shallows, particularly at dawn, and will take the offering ﬁshed 12-18 inches below the surface – boldly. In clear conditions they are very cautious, following and sometimes plucking but not taking.

A preoccupation with many bass anglers is to overcast. This applies to bait and ﬂy ﬁshing, so always be on the lookout for ﬁsh activity in the shallows. Do not be in too much of a hurry to wade deep.

On the Welsh coast the low water springs coincide approximately with dawn, so we count ourselves fortunate that what we consider to be the best of all times occurs consistently, year after year. The ﬁrst glimmer of light with the start of the ﬂood gives us the prime hour of the day’s ﬁshing. Bed is no place for the ardent bass angler – he usually sleeps during the day, unless a boat is available to get out to where the birds are working, but that’s another story.

Techniques will vary according to the particular situation, but a general rule which may be tried is to ﬁsh the larger leaded ﬂies turbulent overfalls and strong currents, and the lighter Mylar goat-tail type of fly in easy tides and small surf, casting across and downtide, as in wet fly stream fishing, slowly stripping in when the lure is directly downtide. In easy tides, stripping in quickly will often induce the take of a following ﬁsh. We find that the lure needs to be always moving, either in a sink-and-draw motion or by stripping in order to promote the predatory instinct. Use only one fly.

My old friend Bob Fox is a great ﬂy innovator, and he ﬁrmly believes that all hooks should be of stainless steel for obvious reasons, and he mainly uses a body of Mylar or silver tinsel. Flies which are heavy in the body (to keep them below the surface in turbulent water) are dressed with a long hackle to give the required vibrating movement without hiding the ﬂash of the body. Black contrasting hackles are favourites of ours and have proved successful, but the scope for variations is endless. All whippings are made with nylon to avoid rot. With the large ﬂies it is imperative that the points are needle sharp, because setting the hook with a soft rod is difﬁcult.

Within the scope of this article it is only possible to give a generalization of our ideas but we feel that it would also be helpful to give details of our clothing and essential items for wading in the surf. An uncomfortable, wet and hungry angler will not ﬁsh well, so:

Finally this kind of ﬁshing, be it from rocks or by wading in strong tides, can be a trap for the unwary. Always ﬁsh with a companion; it’s more fun anyway.

Historical note: This article was published in BASS magazine no.91 Autumn 1999 and also in the December 1972 edition of ‘Angling’.