Crunching along the shingle homeward bound for breakfast, after casting a plug at first light, or clambering up a cliff at some Godforsaken hour, most often fishless, does not give me a lot of confidence or qualify me for an article on bass. However, some time spent angling with Dave Dedman has thrown up some interesting facts, which although probably obvious to those in the know, are well worth sharing if you are less than successful in catching bass.

Dave and I worked together. He was into boat fishing in less than 12 feet of water, having had several nice bass up to 9¼ lb, with most fish averaging 4 to 6lb. I on the other hand, am not a good sailor, and had been shore fishing for about 10 years and considered myself to be fairly proficient, Dave’s boat fishing links fizzled out and he found himself contemplating shore fishing. So, a fishing partnership was formed and we began in earnest. 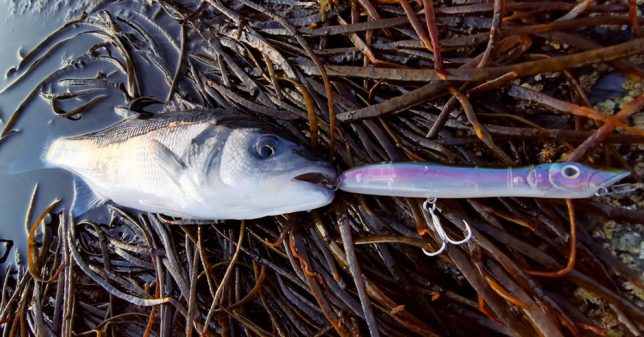 To start with we fished conventionally, as I always had, but Dave seemed to be missing the fun of a regular flow of fish and started to think on different lines. While working together we did little else but talk fishing, and I would relay tales of biggish bass that I had seen caught over the years. One of these tales turned out to have a major influence on the way in which Dave started to fish from the shore. It involved three boat anglers who had come down to the local shingle beach one rough night after being blown off their trip. I was about fifteen at the time, and can still remember the four bass well over 6lb in the few hours fishing that they had. Dave and I reasoned that the main factor in this success must have been the inadequate tackle restricting their casting distance, and the large baits that were used.

We had it cracked. All we had to do was cast close-in with big baits and reel in the bass. Funnily enough it didn’t work like that at all, and after some time I became tired of blanking and reverted back to catching other, more obliging species. The trouble with me was the time I had available to actually go fishing – usually one session per week. Dave, on the other hand, was able to go much more often, and he stuck it out, gradually varying things like bait size, distance cast, terminal gear, in fact everything possible, but still no bass; for a whole season of two sessions per week for seven months, he didn’t catch a bass at all. Then it all changed. One summer’s day at work, Dave decided that he was going fishing that evening. It was a beautiful day, not a breath of wind and the tide was right, but he couldn’t decide where to go. I suggested he try a local shingle beach, not in the normal spots that everybody fished, but off some rocky sea defences, with the bait close in but on relatively clean ground.

He tried it, and had felt several small takes just before dark, followed by nothing. Just when he had resigned himself to another blank, his rod was dragged round and he tightened into a fish, which turned out to be a bass of 7½ lb. It had taken the bait at exactly three hours after high water, and Dave decided to try again the next evening. I managed to drag my wife and son down to the beach for a walk, and met Dave just as he had a tentative chuck. After ten minutes of tense waiting I decided to leave him to it. As it turned out he had wound in, rebaited, cast out and had an immediate pluck just as I was disappearing in the distance. Ten minutes later an 8½ -pounder was laying on the beach! The first piece of the puzzle had fallen into place – this bass had taken the bait forty minutes later than the one the previous evening, which is exactly the same state of the tide as before.

This example of two bass caught in two consecutive trips is extremely important to anyone who is starting out for bass. If your local beach, according to local anglers, is devoid of bass, then the chances are that far from it being barren, the anglers are fishing the wrong part of the tide. Let me expand on this. The beaches that Dave, I, and fellow angler Stuart Durrant fish stretch for about four miles east to west along the western Solent Approach. Since leaving school Stuart and I gradually improved our skills by learning from magazines such as Sea Angler, and refining traces and buying the best gear we could afford, but neither of us (and most anglers in this region) had ever caught, let alone seen, a half-decent bass. Knowing what we know now, we believe that the biggest factors in bait fishing for bass are the casting distance and state of the tide. It is most important when starting out, to keep an open mind and ignore what the locals think is the best time to fish, unless of course they are catching bass consistently. The reason for this is that one of our most successful beaches fishes extremely well when it is impossible to fish at distance due to the strong spring tide, and this puts off the local distance fishermen and we have the place to ourselves.

Getting back to casting distance, most of the bass caught by Dave (8 to 12lb) have been caught at a distance of between one and two ROD LENGTHS out. This obviously needs to be undertaken with extreme stealth, and incidentally, while night fishing, headlamps are worn but used as little as possible and great care is taken to avoid the light shining on the water. The reason why the bass are in so close is the shallow gully just seaward of the low water mark. They seem to patrol up and down this, parallel to the beach, reluctant to move out to take a bait ten feet further out. We believe that irrespective of the bait used, it must be placed in the right spot. After all, a poor bait in the right place has a chance of being picked up by a feeding bass, whereas an excellent bait has no chance of catching in an area where there are no bass present. Remember, a feeding bass knows where it is likely to find food – its whole life depends on it – and it will not waste energy hunting over barren ground when there are food larders elsewhere.

Our stretch of coastline is a shingle beach that gives way to a sandy bottom, which really looks quite featureless and must be the reason why the gully in question is so productive. The distance between high and low water is only about fifteen feet, and the rise and fall some four feet. At the western end there are wooden groynes about twenty feet across and stretching about sixty feet into the sea. These are full of enormous boulders, and while quietly watching from these platforms, bass can be seen patrolling the area, staying close to the edge of the groynes when swimming around them until they reach the shoreline again. It is noticeable that even when startled, the fish will not take a direct route either from the shoreline to the outside edge of the groyne, or vice-versa. They will not take a short cut across the open sandy bottom, and to catch a bass from either of these two situations requires the bait to be under the rod tip and alongside the groyne, or within feet of the shoreline and close to the groyne.

Tackle used consists of light rods with a running leger or running paternoster, the latter having a fairly short sinker length of about a foot, and a hook length of two feet-plus for either rig. Sides of mackerel, whole joeys or mackerel heads are used, mounted on a Pennell rig with Viking 4/0 hooks. Fresh mackerel is used occasionally, but frozen is the norm. Bites often start with a slight vibration of the line, which is kept slightly slack. A series of pouting-like tugs follow, which is the signal to release more line as the bite develops. The tugs now develop into more determined pulls, and then hopefully into a positive take, which is allowed to drag the rod round to almost pointing at the fish, before lifting the rod positively into the fish. The ratio of bites to fish is about three to one once a positive take develops: but there is a bite-a-cast on some sessions, most of which never get beyond the first stage, which we have proved to be fruitless is struck at. The rod is held at all times, often while we are sitting down on the shingle (it is easier to remain quiet if you sit down).

This kind of fishing, right in close, may already be part of your repertoire, or you might even hate the thought of it. Whilst I agree that playing a fish onto the beach from long range, after having the rod slammed over in the rest, is one of the most satisfying feelings there is, you surely must agree that you can only catch fish from where they are feeding. If you have not tried the few feet of water at the bottom of the low tide zone, then give it a go. Remember that you can NEVER be too close, and keep an open mind. Dave has seen bass almost beach themselves on quiet nights, much the same as a carp will at the edge of a lake.

Historical note: This article first appeared in BASS magazine no.67 May 1993.