For as long as I can remember I have had a strong preference for shore fishing. An illogical preference, as boat normally delivers better than shore – particularly with pollack (next to bass, my favourites). I do not suffer from sea sickness, so why this curious idiosyncrasy?

It started so long ago that I cannot remember precisely why. I may have been influenced by F. D. Holcombe, whose book, Modern Sea Angling, was a treasured much-read school prize. Holcombe was Hon. Sec. of the British Sea Anglers’ Society and like most members of the Society was a boat angler. In those days between the two world wars very few anglers had their own boats. Rowboats could be hired at most seaside towns, but the usual way for anglers living far from the coast (as most BSAS members did) was to pay a local fisherman to take them out: the forerunner of today’s charter-boat skippers. Yet Holcombe, for all his preference for boats, acknowledged that the shorefisher was the more “Compleat Angler”, because he was independent of paid assistance and did it all himself: getting bait, tackling up, casting, landing his fish and unhooking them; and most importantly, getting to the chosen fishing spot by his own efforts – in my case mainly on foot.

It was that last feature, getting to the scene of my fishing, that probably most influenced me. I liked walking the cliffs of South Devon and Cornwall, and climbing up and down them in the unending search for an angling Eldorado; and even as a youngster I could appreciate their magnificent scenery. By contrast a small boat seemed cramped and uncomfortable – and gave me no exercise at all.

Rock-fishing usually involved a walk of at least five miles: in some cases, like Start Point, at least ten miles there and back. This became an important consideration when school (and the army) gave way to occupation. My career as a public auditor was 90% deskwork, and when fishing called I certainly didn’t feel like exchanging that for a seat in a boat. And the habit formed in youth has continued right through a long angling life. 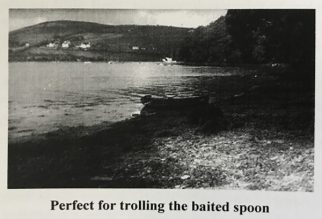 I do however remember some notable exceptions. As a teenager I sometimes hired a rowboat at Dartmouth. I felt that if I could row out to the Mewstone, three miles outside, I was sure to get bigger pollack than I got from the rocks. It didn’t happen that way, and after two arduous efforts I decided to try up-river for bass. I found Old Mill Creek, just up from the Royal Naval College. It looked a perfect situation for the baited spoon. I put one on, baited with king rag, and trolled slowly up the creek with the tide. I watched the rod-tip nodding rhythmically to the turning of the big spoon. After a few minutes it bent over and stayed bent. I pulled the oars in, seized the rod, and struck – and found I had a flounder of about 1lb, surprisingly lively despite the powerful rod (necessitated by the big spoon). Eight more followed, all about the same size; and a small bass. Later that year I made several more visits to the creek and caught more flounders – up to 20 a time with odd 2-pounders among them – and several bass. The latter regrettably were always small, but I occasionally saw better ones following hooked flounders and sometimes there would be a savage bite which tore line off the reel – but the delayed strike never made contact. The unavoidable delay in shipping the oars made for a strike that was right for flounders but all wrong for bass. The baited spoon was however a particularly intriguing method of fishing, which fully justified sinking my scruples about boatfishing – for a time.

Many years later I found myself again wondering whether better pollack might be found a little offshore. It was during the Anglesey tagging project, and I had often speculated on what a little rock 4 mile off one of the beaches might produce. We had a small dinghy for getting easily to the various beaches (and for running out the beach seine when we used it). One evening when there was too much drifting weed to fish the river-mouth beach I put on the outboard and motored out to the rock. I had some fresh king-rag and with this as bait began trolling slowly round the rock. Action was instantaneous – a five-pound pollack. In the ensuing hour there were twelve more, weighing 1½ to 5lbs. It was hectic fishing, and great fun on a light rod. The following year I gave it another hour, early one morning when the bass tagging was finished. Not quite so fast that time, but six useful pollack including one of exactly seven pounds. In succeeding years I took out other members of the tagging team, and all had good pollack, topped by a beauty of about ten pounds by Eric. It was good fishing and a welcome break from the more arduous bass tagging. We would like to have tried it more often, but with those few exceptions the bass demanded all the time we could give them.

In that Anglesey project the dinghy was also used on autumn and winter nights when the tide had flooded too far for further netting or rod-fishing from the shore. We anchored in the river-mouth, in mid-channel, and legered with whatever bait we had – usually king rag, sometimes crab. It produced a surprising number of whiting, of acceptable size for the pot, and also some bass. The frequency of bites always speeded up when we were gutting the whiting. The bass acquired a crafty habit of biting only when our rods were-down, while we were gutting whiting, or tagging a bass just caught. Rob remembers their tantalising tricks well. Far more were missed than caught. But again it was a change from the usual routine and added a few to the tagging total which we would not otherwise have had.

I tried the dinghy in the Camel once, legering at night just off the rocks at the mouth. Two hours yielded only one bass. It was a good one, though at 7¼ lb not so good as I had hoped from the 20-minute struggle to get it to the net – where the hook dropped out as soon as the tension eased. Sadly she did not survive and could not be tagged. 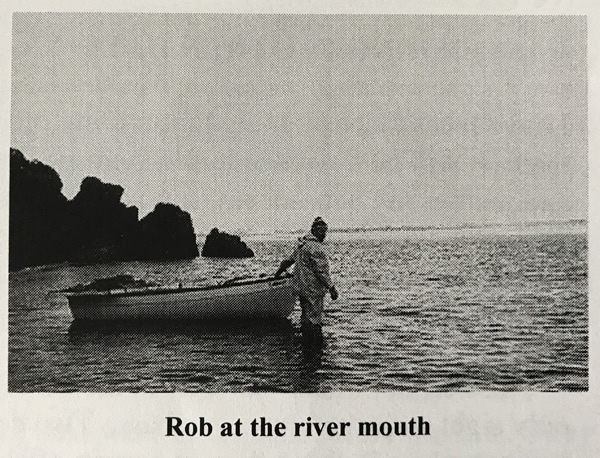 There were other occasional resorts to boat fishing, with no memorable success except just once on the Exe. My wife’s uncle Colin, himself a keen angler, managed one of the Exmouth banks. Among his customers was Dennis Chown, a very experienced local bass angler. One day, when we were staying with Colin and his wife, Dennis offered to take me down the estuary in his boat. It was early in the season, and
Dennis warned that the bass might not yet have arrived. That being so I decided to take my lightest rod, a trout spinner, to get the most out of any bass that might turn up. The technique was to drift down the channel with just a few yards of lightly leaded line out, and a live sandeel on the hook. There was a fairly big swell running, aggravated by the strong outgoing current, and the boat needed careful handling and rather faster engine-speed than Dennis perhaps liked. We drifted down past the Pole Sands with no result, then fast back upstream to the starting point for another drift. Dennis noticed a sudden flurry of gulls lower down the channel and accelerated slightly to see what it was about.

It was about bass: hundreds it seemed, darting this way and that in their pursuit of the sandeels. Our baits were taken instantly, and I had my hands full with the light rod. Dennis’s rod was only slightly heavier – and he had at the same time to maintain control of the boat in the heavy swell. It was a masterly performance and after a few minutes both bass had been netted and boated – by Dennis – and he was running back upstream to where the gulls were still working: we had drifted far past them.

Another drift, another fish each, and so it went on all the afternoon. It was an exhilarating experience, with bass of just the right size for our light rods: 2½ to 5 lbs apiece. Anything heavier would been hard work and wasted much time. With 25 between us it was the catch of the season. Dennis was delighted, and I was pretty pleased myself and conscious of my indebtedness to a true expert. It was his all-round skills which had made it possible.

Dennis very sadly died shortly after – at all too young an age – but not before I had enjoyed the privilege of one more outing with him, with again a fine catch, though not so spectacular as that first time (half a dozen sizeable plus a score of small ones).

Dennis was an exception to Holcombe’s dictum that the best sea-anglers are those who fish from the shore. He did everything, and did it well – including the netting beforehand of the sandeels for bait.