Sexual maturity is governed by length, which for female bass from north-west European waters is 42cm total length, achieved in six to seven years. During the months of october and november those fish that are sexually mature begin a steady migration from the North Sea and Eastern Channel as the water temperature lowers. Fish that have spent the summer months along the coast of Norway, Denmark, the United Kingdom, Germany, the Netherlands and Northern France move south-westwards towards over-wintering grounds in the western approaches where they group in large concentrations.

This annual migration is made in search of the consistent temperatures found in deeper waters, which are essential for the females’ eggs to form and for the male fish to reach breeding condition. This migration is an integral part of the life cycle of bass that live in the north of the species’ range.

In march and april the fish will begin their return migration. Somewhere along their journey they spawn a number of times in open water generally between may and june, depending once again on water temperatures. Tagging studies, carried out over the past thirty to forty years by Donovan Kelley MBE, have proven conclusively that those European sea bass that return to the coasts of the UK always return to the precise location that they have inhabited every previous summer since maturity. 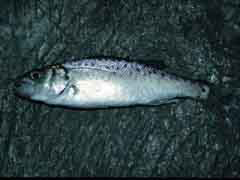 Most juvenile bass spend the first three or four years of their lives in estuaries, starting to move out to join the rest of the population from their fourth year. Until they reach about four inches in length they are often spotted.

In the Mediterranean and north African coast there is a closely related species, Dicentrarchus punctatus, the spotted bass, which retains these spots throughout its life.