Brewing out to sea …

Brewing out to Sea: a comparison of the Storm Kettle and the Jetboil.

Much of my bass angling involves long intense periods of fishing while cramped into little Zodiac inflatables. During a day on the water I like to stop at least once to stretch my legs and switch off from focusing on how to catch my next bass. The excuse for the change in scene is provided by my  need for caffeine. These tea breaks have resulted in times of the fishing being slow, me stepping ashore on coves and tiny beaches beneath cliffs around the UK and Ireland. Given we have found a variety of washed up lures, a World War II Spitfire cannon case, and even modern unexploded thunderflash munitions, its probable my friends and myself are the only people who ever set foot on some of these places.

Just recently when taking Steve Richardson out on my little boat there were no signs of fish at all and we happily took a shore break. When I removed my traditional Storm Kettle from the bow bag, Steve removed a new Jetboil he had just bought and was keen to try out. Rather than select one, we decided to use both and undertake the BASS blogs first comparative test of gear :

The Storm Kettle is simplicity itself, a firebox with a double skinned aluminium chimney that contains a reservoir of water. You light a fire, and wait for the heat generated to boil the water. I often don’t bother to take fuel as there is a ready supply of driftwood on these remote beaches and finding the firewood is if nothing else a chance to stretch legs that have spent hours shoehorned into my small craft. A bit of paper or cardboard (or even a barbecue firelighter if you want to cheat) helps get things burning. I have tried using petrol for the outboard on one day when the wood was somewhat damp. The resultant fireball did get everything burning fiercely, the problem was this included my eyebrows and the already fading remnants of what I used to consider a fine head of hair, and I can not therefore recommend the unleaded method of speedy tea making.  Once alight however the Storm kettle (given a supply of dry fuel and a nice gentle breeze) boils water for 2 mugs of tea in around 5 minutes. 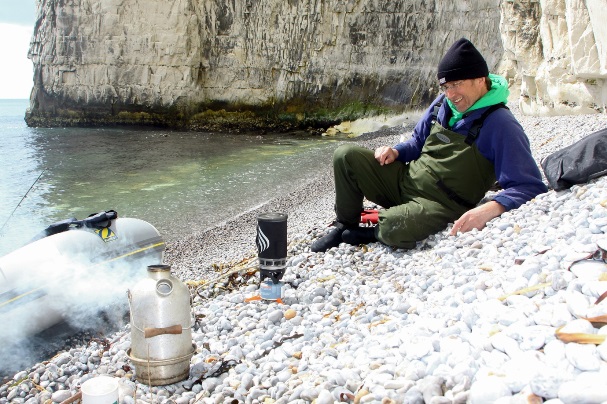 Steve’s Jetboil packed neatly into a bag no bigger than a pint of milk. Although it took Steve 10 minutes to work out how the device fitted together as he was using it for the first time, once put together and ignited the Jetboil was clearly not in danger of breaching the Description of Goods Act. The gas and the water container formed a stable, insulated single item with a flame that burnt with the intensity of a welder’s torch. It seemed it was barely lit and steam was pouring from the top of the gadget.

With the tea made we sat beneath a limestone cliff of “our” bay watching swallows, gulls and even a peregrine while trying not to consider what might happen should the cliffs decide to give way.  I sipped my brew from a mug I keep in the same bag as the kettle. Steve didn’t need a cup as the water container for the Jetboil doubles up as the mug . Steve’s device is also self igniting where as I need a lighter which I keep with my teabags in a little Tupperware box to keep the damp out. 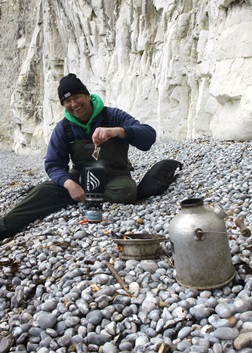 It was hard to conclude anything other than the Jetboil is a compact, rapid and superbly designed way of brewing up when out in the wilds. My 1 pint Storm kettle, although less compact is still fairly small (I often carry it in my 20 litre rucksack along with a lure case and a few other items). It might need a mug and necessitate you to bring or scavenge a source of fuel, yet it still does what it is supposed to do perfectly well and fairly quickly.

Despite the brilliance of Steve’s Jetboil I have no plans at present to convert from a 19th to 21st century means of boiling water. In the same way I prefer to sometimes fish with my homemade lures, rather than shop bought, high-tec, hydrodynamic Japanese plugs, my decision is more to do with personal philosophy rather than efficiency alone.  Not only am I in no rush when it comes to taking shore breaks and slowing down and switching off from fishing is part of the point of the break, but also the Storm Kettle gives me an excuse to play with fire – an activity that along with fishing itself ranks amongst the best available means of taking time out from the modern world, and connecting with the primitive being that lurks within.