“Yup, Carrahane Channel is the place to be if you want a big bass tonight. You’ll need live sandeel though, none of that frozen stuff. First of the flood in the pool, where the lagoon runs out to the sea”. With that Liam was off back along the pier at Fenit. He was top man with the bass, living just a stone’s throw from Barrow Harbour. It was a hot tip and one not to be ignored, especially as we had a tub of live sandeels in the back of the hire car.

Deep Pocket studied his watch; “It’s just gone noon and it’ll be low water in two hours. We could grab a pint and go and have a look at the channel in daylight, then come back tonight”

A cunning plan indeed, especially as it offered a short visit to the pub. 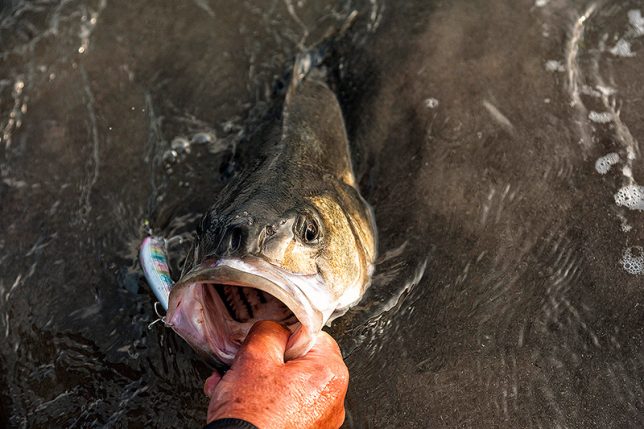 Suitably refreshed, we navigated the Micra onto the beach at Carrahane lagoon. It was a gloriously sunny autumn afternoon. The lagoon was about two hundred yards wide and nearly a mile long. The surf beach was obscured from view by the high dunes and sandbars that separated the lagoon from the Atlantic, but we could hear the surf pounding onto the strand. The remains of the previous tide meandered between the sandbanks like a silver ribbon, on its way to the mouth and famous pool.

We pulled on our wellies, locked the car and set off across the lagoon. The narrow flow of water was shallow, just inches deep and had gulls wading in it. We quickly splashed through, keen to get across to have a look at the mark. As we crested the bar the view was magnificent — the deep blue Atlantic stretched to the distant horizon. Mount Brandon and Stradbally were visible to our left, and far to the right was the massive bulk of Kerry Head. As far as the eye could see the regular lines of swell marched relentlessly towards the strand, to break in gleaming white surf that raced up the beach. Immediately in front of us, where the water left the lagoon it had scoured out a deep pool in the strand some eighty yards wide. The lines of surf raced towards the pool and then died as they met with the deeper
water, collapsing, no longer able to maintain their momentum. Birds circled and wheeled above the pool, occasionally plunging into the water for sandeel. It was a natural hot spot, and we sat on the sand bar just gazing at it and contemplating what the night had in store. 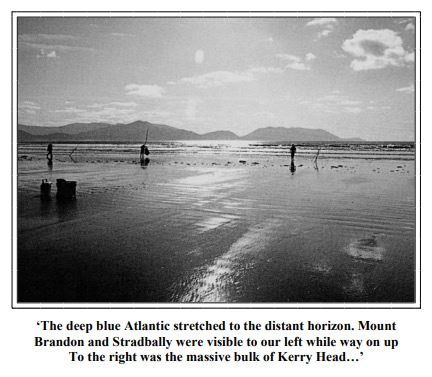 We turned and strolled back up over the sand bar. The view of the lagoon from the top left us speechless. The spring tide had turned and was pushing hard through the narrow entrance. The narrow trickle where the gulls had been wading was now a raging torrent over fifty yards wide as the flood surged into the lagoon.

“Bloody hell!” cried Deep Pocket, “Come on let’s get across while we still can”.

We raced down onto the flat sand of the lagoon basin aiming to get back across where we had walked before. But there was no chance as the lagoon base had turned to quicksand.

“Run, let’s get in front of the tide and get across up there,” I shouted in desperation.

And off we set like Olympic sprinters. Gasping for breath we reached an area of hard sand where the flow was only twenty yards wide. The speed of the tide was surprisingly fast and we could see through the clear water that there was no way we would be able to walk across. It was going to be an October swim. We stripped off, shoved our clothes into our wellies and the Micra keys into Deep Pocket’s mouth – proving that its large size did have a use after all.

We didn’t notice the cold as we waded across, but it soon got too deep and we had to swim. The far side was a vertical wall of sand and scrambling out was very difficult as each time you grabbed hold, a handful of the wall would collapse. We eventually got out; cold, shivering but glad to be alive and not realising that the tide had carried us a good way down the lagoon. “Oh my god, the car!” exclaimed Deep Pocket, spitting out the keys.

We looked back up the lagoon and were relieved to see the little silver Micra still on dry land even though the encroaching tide was only twenty yards from it. Of more concern though, was that it was no longer alone, for parked in front was another vehicle. From this distance we could see that it contained two occupants who had clearly come onto the beach to walk their dog, or rather open the door and let it run around whilst they sat in the car.

Getting dressed was no longer an option as our wellies now contained soggy and cold clothing. Unperturbed but stark naked, we set off back towards the car. As we neared it we could see that the occupants of the other vehicle were female.

“Move your wellies and wet gear down to cover your tackle and don’t look at them’, my counterpart instructed. I suspected he might have done this before …

In any event we strode past the other car to the sanctuary of the Micra, but I couldn’t resist a look back. I caught a glimpse of the female driver carefully adjusting her rear view mirror to get a better view of what had just sauntered past. Her passenger was one step ahead with the wing mirror locked on to English rear ends. In addition, the golfers playing the sixth hole on the cliff above the beach waved with their clubs and offered general shouts of encouragement.

This wasn’t to be the end of the bad day out either. As we drove back nude to get a hot shower and a change of clothes we hit Tralee at 3.30pm – leaving time at the Catholic girls school. Murphy’s Law made sure that the lights went red at the pedestrian crossing with us stuck at the front of the queue. We were subjected to a horde of giggling schoolgirls pointing and jeering at the now red-faced occupants of the Micra.

“You went where?” quizzed Liam. “Jaysus. Only a real eejit would go to the north side of the channel, cos’ theyd be cut off. We only fish the southern side. You can get there from the golf course you know.”

Now he tells us.