Over the past few years some have vocally claimed the reduction in bass stocks is a result of poor recruitment (i.e. low numbers of young fish) to the overall stock. Some I am sure genuinely believe this to be a truthful and complete explanation, others I suspect claim this to be fact in an attempt to muddy the water so they can continue to exploit the bass stocks without restriction. The EU fisheries scientists who have gathered and studied data from a variety of sources, plus the vast majority of us who seek to catch bass, believe the explanation is due to other factors as well, the most significant by far being over fishing of our bass.

Leon Roskilly is a tireless campaigner for recreational sea anglers and a long-time supporter of BASS. This week he posted some data to remind us why poor recruitment (or not enough juvenile fish if you like) is only one side of a double edged sword. Leon kindly gave me permission to use and expand upon his explanation here, as it’s important we all are reminded why this theory is flawed. Yet this story to explain the stock decline continues to be used by some as a way of diverting attention from the principle cause.

There is a growing perception that the measures being put forward to restore the bass population is simply because of a perceived recruitment failure.

Detractors to taking any action are concentrating on questioning the science / survey methods being used and pointing to recent recruitment success following last year’s mild winter, as well as current catches by both anglers and commercial fishermen.

There have been periods of poor recruitment in the past when effort on bass was a fraction of now. But the species weathered those poor years and responded when conditions for increased recruitment were better.

The real problem has come about because of several years of good recruitment, leading to exploiters finding new markets which now demand maintenance of supplies whether nature is capable of producing the fish or not (and worsened by boats with no quota looking for alternative fishing).

It’s the increasing levels of exploitation of a slow-growing, late maturing species that is the real problem and would still be a growing problem even if we now experience a period of good recruitment (which would take more than 5 years to feed through!). Some are claiming 2014 was a good year for recruitment, which might be the the case when compared to the 4 years of almost total collapse of recruitment that preceded it – but the sad truth is last year was below average compared to the past 30 years ( right side graph).

The down slope of recruitment on the graph, in opposition to the increasing levels of exploitation (left), make for a more dramatic statement, but it is that upwards line of the landings that is doing the damage and has bought about the current situation.

In 2004 the International Council for the Exploration of the Seas (ICES) said that our bass “stocks can withstand current exploitation rates, but that fishing effort should not increase (ICES, 2004)”

Yet just look at how effort (bass landings) in the seas of northern Europe has expanded since then as is shown so well in last years game changing ICES report! ( http://stecf.jrc.ec.europa.eu/c/docu…&groupId=43805  – Download and choose ‘seabass’ halfway down and open that folder, then choose 2nd item ‘6.9 Small scale contract )

It’s the ever increasing effort that needs dealing with, even if we see a return to years of good recruitment. 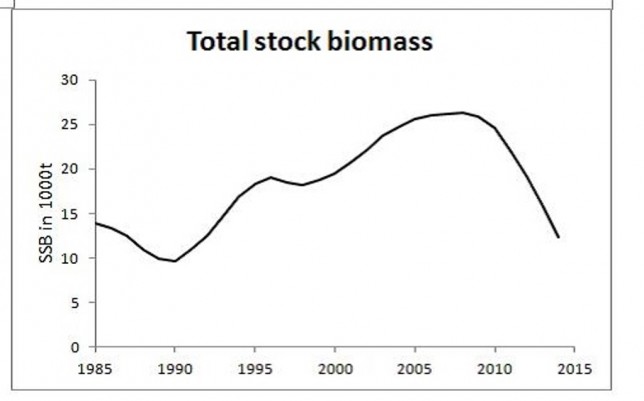 So next time someone claims the reduction of our bass stocks is just due to poor recruitment (i.e. because of cold winters) and they claim the stock will recover if there are a few good breeding years, just point them towards these figures and this more complete explanation.