New bass regulations fail to properly protect the bass stocks, prevent anglers from keeping any bass they catch for 6 months a year, yet allow commercial gill netters to continue to catch bass AND with an increased monthly limit.

If you want to express your anger and demand a fair deal for bass and anglers, then the demonstration on the 9th April in Camborne is the place to be. The protest is aimed at the DEFRA minister responsible for our fisheries; the person who claimed the deal he helped secure (which ignored the scientific advice on necessary bass landing reductions) was a great deal for commercial fishermen – he wasn’t wrong!

We meet at Rosewarne car park Camborne (TR14 8BE) at 10 am and march to local constituency office of George Eustice MP, the Fisheries Minister. The media will be there. Wearing you fishing attire and bringing rods is encouraged to add impact – but is far from essential. Banners will also help (but messages contained on them should be polite!) Suggestions for placards include: “A FAIR deal for Bass and Anglers”; “Priority for hook and line fishing”; “Bass are a PUBLIC resource” etc.

It doesn’t matter at all whether you belong to the Cornish Federation of Sea Anglers (the protest organisers), nor does it make a difference if you are from Cornwall or from further afield (I for one plan to travel with others from Bristol). All that matters is you have a wish to express your displeasure at the current measures. So for the sake of our future bass angling and our bass please try and add to the ranks and join us.

The reason why usually apathetic anglers have finally become so enraged is brilliantly explained by long-time angling campaigner and BASS member Leon Roskilly who has kindly allowed me to reproduce his thoughts in the brief article below. Leon is the most reasonable, mild mannered, non-radical of men. When the likes of Leon have finally had enough however, you just know things have really gone too far:

How did DEFRA get it so wrong on Recreational Sea Angling?

Even after years of talking to anglers, a number of reports all confirming that far more people go sea fishing than anyone ever expected and even more surprising, having seen the evidence showing the value of sea angling to the economy, the improved health and wellbeing of those who go sea angling, and the number of jobs dependent on the recreational sea angling sector, DEFRA appear not to believe that sea angling has much to do with what they really do.

A succession of DEFRA ministers responsible for fisheries have grasped the political importance of the angling lobby and some have made efforts to have angling recognised within DEFRA fisheries, but only to the extent of keeping the lid on and maintaining the status quo whilst DEFRA Fisheries goes about its core business of dealing with commercial fisheries.

Promises of reviews, drawn out whilst evidence is gathered and finally reports left on shelves to gather dust. Assurances given and forgotten. Priorities changed as administrations changed and assigned officials moved on to be replaced by someone with no real knowledge of the sector.

The sky didn’t fall in on anyone’s career.

It seemed that anglers could sometimes be a noisy lot, full of bark but no bite.

In the wheeling and dealings of the December Council of Ministers, the minister must have felt comfortable agreeing to a zero bag limit for recreational bass fishers. After all catch and release was widely practised anyway. George “Anglers are always moaning” Eustace winning agreement to allow C&R angling to continue, no doubt expected praise for winning such a concession for anglers.

Perhaps if the moratorium on catching bass had been applied to everyone, they may have gotten away with it.

But they went on to not only excuse ‘low impact’ fixed gill-netters from 4 months of the moratorium, when their catches are highest in the period, but also increased their catch limits by a third.

In effect they were telling anglers to put back any critically endangered bass that they might catch so that they can be netted and sold.

There always was an anger within angling that stocks were being fished down for commercial gain, moving first one species then another into the need for restrictive management measures whilst scarcity spoiled the angling experience, threatening not only anglers’ enjoyment, but those many livelihoods dependent upon the anglers’ spend.
But I’ve never experienced such anger as I see now.

A healthy stock that was of no commercial interest until the chefs discovered ‘sea bass’ and the netsmen went all out to fulfil demand, expanding the market until they exceeded the ability of the slow-growing and late maturing species to keep pace.

A healthy stock that was a mainstay of recreational sea angling and the many jobs that sea angling supports commercially fished beyond its natural limits.

And then anglers were told that they must return any they catch, not for any real conservation benefit, but so that netters can fish an increased catch limit.

For the first time in my experience ordinary anglers are preparing to demonstrate, to tell DEFRA “We’ve had enough”. “Those fish are a public resource and we are entitled to a fair share’, “The jobs and businesses we support are every bit as important as unsustainable jobs in the fishing industry”. “Treat us as we deserve to be treated, treat the recreational fish stocks on which we depend as they deserve to be treated and see what a positive impact that will have”.

On April 9th anglers will be marching. 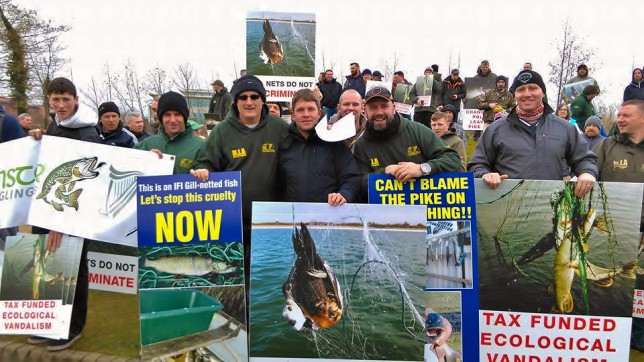