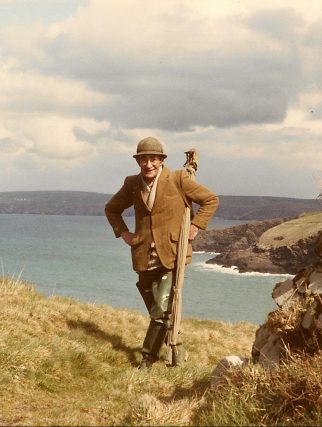 Donovan Kelley is often regarded as the leading light and authoritative source of much of what we now know of bass biology and behaviour, and for which he was so rightly awarded an MBE in 1991.

He was the man who did more than any other to advance our knowledge of bass ecology and behaviour, and to make us first aware of the dangers to the species from over exploitation.

Don presented details of his initial work in Angling in 1949, and he subsequently published nine scientific papers on bass spawning and migration, feeding and growth, and strong year class theory, through the Marine Biological Association. In the early 1970’s Don began a five-year tagging study on adult bass on Anglesey, journeying from his home in Plymouth and back again over many ‘holidays’ and weekends, often assisted by his wife Betty. In 1981, he began his research into first year bass (0-group) abundance, growth and first-winter survival rates in estuaries of West Wales, and moved on to assess juvenile and adult bass growth rates from sites in North Pembrokeshire, North Cornwall and Dorset and, with the assistance of Bradwell charter skipper Bob Cox, he traced the migratory movements and growth patterns of bass in Essex waters.

Don’s bass studies were the epitome of what we today call ‘Citizen Science‘ and his work on bass involved collaborations with more than four-hundred amateur volunteers and members of the scientific community alike.

Alongside all of this work, Don’s interest in statistics (he was an auditor by profession), and his deep fascination for bass as an angler, enabled him to compile records of big bass captures from 1947 to 1996. Based on reports published in sea angling magazines and club records, he also listed the most successful big bass baits from 1937 through to 1997. These are reproduced as tables in Life with Bass. They make fascinating reading.

With the kind permission of Donovan’s son David, we will publish content from Life with Bass in the form of blog posts on our website. This book is a treasure trove of delightful and highly informative standalone accounts, which will be meat and drink to any angler with an interest in bass, both from an angling perspective, and in relation to the wider aspects of bass biology.

Keep an eye out for the first excerpt, A Lifetime with bass, where Don gives a brief account of the main phases of his fishing life.

All photographs with thanks to David Kelley