My first experiences with bass took place when I was about thirteen, when my family regularly spent summer holidays and weekends in a caravan at Newhaven. I had been coarse and trout fishing since I was about five, but I had only read about fishing in the sea. 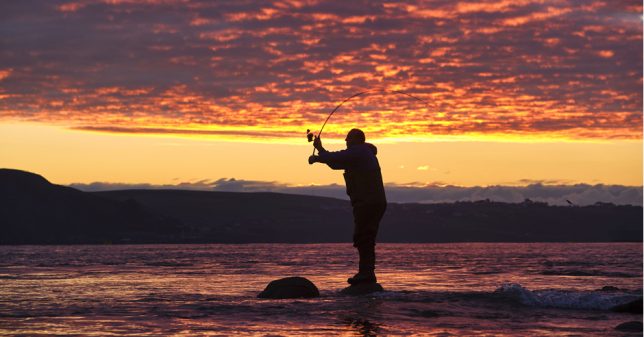 My first trip was on a sunny day in June. I took an eight-foot trout spinning rod, a fixed spool reel loaded with 6lb line and some small Devons and Wagtail baits. I had used them for pike and trout, and I knew that mackerel and bass could be taken by spinning. I found spinning from the high western arm somewhat daunting, being between twelve and twenty feet above the water depending on the tide, and I knew nothing about drop- nets. There was little wind, the sea was calm and there were mackerel about. I felt a bit out of place with heavy bottom-fishing gear in those days, but after a few casts I could see several bass following my two-inch Devon. Eventually one of them grabbed it and I had a great battle with a three-pounder on such light gear. It was kindly netted for me by my bottom-fishing neighbour. So were half a dozen others from about 1lb 8oz to 2lb 8oz that also fancied my ‘Devon’ that day.

I learnt a lot during subsequent sessions on the breakwater. A few enlightened types were spinning or float-fishing for bass with light ten-foot rods, and I found out about rubber and plastic sandeels. So I improved my own results by slipping a two-inch strip of chamois leather on the treble of my little Devon.

Over the years I have had a series of fishing passions, including carp, barbel, big Hampshire Avon roach, tench, trout and various saltwater fish – mullet, tope and shark to name a few. But my love of bass fishing was always there, and my horizons broadened after I became editor of Angling magazine in 1967. My favourite types of bass fishing have been legering amongst rocks and the boisterous sport of casting into the long breakers on Atlantic storm beaches.

My job allowed me to fish alongside such folk as Leslie Moncrieff, Clive Gammon, Ian Gillespie, Bob Cox, John Rawle, John Jones (a bass-mad Welshman who seemed to spend half his life on the Irish storm beaches of Kerry), John Darling, Doug Cooper and the Irish duo, Des Brennan and Kevin Linnane. At Angling we instigated a bass-tagging scheme in the United Kingdom, because even in the sixties and early seventies, commercial fishing for bass was doing much damage to the stocks. We also helped to form B.A.S.S. to help promote the conservation of bass and to encourage light-tackle fishing.

I well remember a meeting we set up with MAFF (now Defra), representatives from commercial sea fishing, the NFSA, the tackle trade, and others. Our aim was to get the size limit for bass raised to fourteen inches, so that a higher proportion of fish reached breeding age. Our arguments were well made, with support from several marine biologists but the words of the Ministry inspector who chaired the meeting are still branded on my memory. ‘We have listened carefully to your arguments but the French housewife prefers ten-inch bass, so that limit will be retained’. We were furious but helpless.

It is good to see that some progress on bass conservation has been made in the thirty-plus years since B.A.S.S. came into existence. In Ireland, the close season and bag limits have gone even farther.

I still retain an interest in bass and bass fishing, but around Kent and Sussex where I used to fish, there seems to be very few bass about these days. At nearly seventy, I hope to catch a few more before I hang up my waders for the last time, but I have no illusions that it will be easy!