Prawn ﬁshing for bass is traditional along the Dorset coastline. The area has the second lowest tidal range in Europe, therefore, with some caution, many of the shallow reefs are easily accessible. 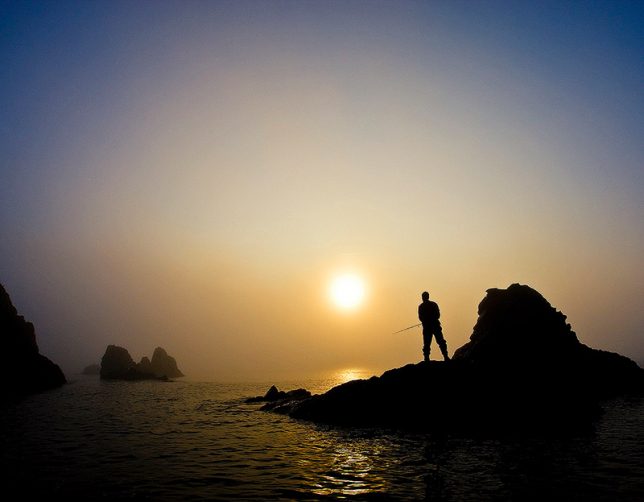 Where the shoreline is covered by the common varieties of seaweed, prawns are plentiful and it is possible to ﬁnd enough for bait. During darkness, shining a strong light into weed beds often reveals their presence as two orange dots, being the light reﬂected from their eyes. A supply can be obtained using pushnets, pots, or dropnets. Some locals use a square net attached to a stout pole about 6 foot long, scraped along the walls of Weymouth harbour. Another method is to bait a dropnet with ﬁsh heads or skeletons and lower down the side of an old harbour wall, after dark being the most productive time. The net can be emptied after a few hours, or left to ﬁsh all night. The use of several nets will speed up the catch rate. Around Weymouth harbour, large prawns (up to the maximum of 31/2 inches for the species) are available from mid-August until early October. For daylight ﬁshing in clear water, dark brown specimens found in kelp are better than the normal grey ones.

An easy way to make a drop net is to cut up an old freshwater keepnet. The entrance to the chamber should be just large enough to allow a prawn through; if wider, the catch will be mostly crabs. The attachment for the bait can be stainless steel wire, and there needs to be a lead weight to sink the completed drop net. 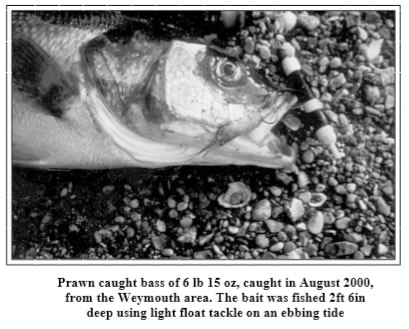 Prawns can be tanked in an aerated dustbin. It helps to add rocks, old clay plant pots and other items in which they can hide, because this cuts down cannibalism. Never put food such as pieces of ﬁsh into the water – even if left dangling on a piece of string – the water will go cloudy resulting in high mortality.

Prawns are best transported in a bucket with a lid made from a colander. This allows the water to be emptied and replaced without the risk of losing any bait. Changing the water every hour keeps the bait lively. I feel this is important, because it is their constant kicking that makes prawns so effective.

Light ﬂoat ﬁshing with prawn is a productive method. Choosing a suitable ﬂoat can be difﬁcult – a large prawn will pull many small ﬂoats under, so a type that is buoyant enough to carry three swan shot is necessary. As there is no need to ﬁsh deeper than three feet, I prefer to use a modiﬁed small polystyrene cigar-shaped sliding sea ﬂoat. I pass a ﬁne gauge stainless steel wire through the ﬂoat with a loop made at each end, the lower loop being formed after a small barrel lead is slid up the wire to the underside of the ﬂoat – this makes the ﬂoat self-cocking. The mainline is attached to the top loop and the trace is attached to the bottom one. By cutting up sea ﬂoats into various lengths and attaching different sized leads it is possible to have a large selection for different sea conditions. Before using for the ﬁrst time I drop each one into a bucket of water and where the waterline is I attach a strip of white tape. This is similar to the Plimsoll line painted on a large ship. I then write the weight of the ﬂoat on the white tape for reference.

When ﬁshing from high rocks, a wider more rounded ﬂoat is more visible. Bright red or orange is a good colour in a rough sea.

The ﬁner you ﬁsh the more takes you will experience. During bright calm conditions the lightest practical trace would be 6lb mono, but when the sea is rough, 12lb clear mono would sufﬁce. During calm conditions the mainline should – if possible – be fished with a bow in it, so that when a ﬁsh starts to run with the bait it does not feel the resistance of the reel check. If the line is taut, some ﬁsh will reject the bait. 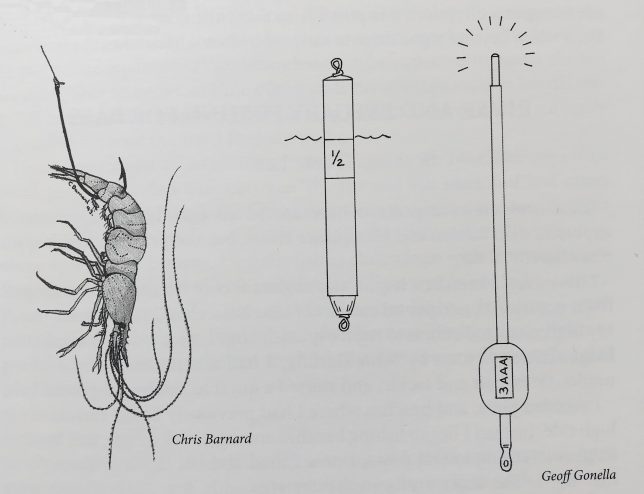 The most suitable hooks are short shank in 1/0 or 2/0 depending upon the size of prawn. How best to hook a live prawn is a much debated subject amongst anglers. I insert the hook from underneath into the second or third segment. If the prawn is small, or if only shrimps are available I use two, hooked back-to-back so that they kick against each other. The most important thing is to change the bait regularly so that it is always kicking. It is not a coincidence that many bass are caught within a few minutes of casting out a livebait.

Bass have good eyesight so there is no need to ﬁsh deep, about three feet is enough. The bites are very positive with the ﬂoat often travelling across the surface before going under. It is not necessary to watch for bites all the time, just set the clutch lightly. The runs are startling – even from small ﬁsh – with the line ‘singing’ out. After many years of ﬁshing, it’s a sound that still makes me tingle.

If the ﬂoat setting allows the bait to ﬁsh close to the bottom, small wrasse will continually bite the heads of the baits. The occasional large ballan wrasse can be fun to catch. Small pollack can be a problem, day or night, and even tiny ones are capable of swallowing a whole prawn. Larger specimens will often dive deep into weed.

Fishing at night with a ‘Starlight’ or similar attached to the ﬂoat is very easy, easier in fact than ﬁshing in daylight. Only when there is strong moonlight is the ﬂoat hard to follow. When ﬁshing close-in at night, never shine a light on the water. During September squid can be a problem after dark. Many are 2-3lb and will run with the bait.

An ebbing tide usually ﬁshes better than the ﬂood, with the ﬁsh feeding until only a few feet of water covers the reefs. Tidal currents can be used to cover more ground. Should the wind blow offshore or from an advantageous direction, it is possible to allow the ﬂoat to drift a long way. Even when beyond sight there is no doubt when a bass takes the bait!

Historical note: This article was published in BASS magazine no.104 Winter 2002