It’s 4.00am and the car glides down the steep narrow lane towards the beach. Lucy and Maizey, my two Jack Russell terriers, are standing on the passenger seat with noses rooted to the windscreen, scrutinizing the headlight beam for rabbits. As I pull to a halt they leap across onto my lap, pleading with me to open the door. I do, and they are gone like a shot.

I lived overlooking Mounts Bay and a cast away from the water, but this morning I have driven about two miles west, and as is my preference, got dressed in neoprene waders and wading jacket before setting out. Save for the rod and line tray, my flies and other bits of tackle are in the jacket pockets or around my neck on a chain. I fasten the line tray, snap together the fly rod, and walk down the track onto the sand. 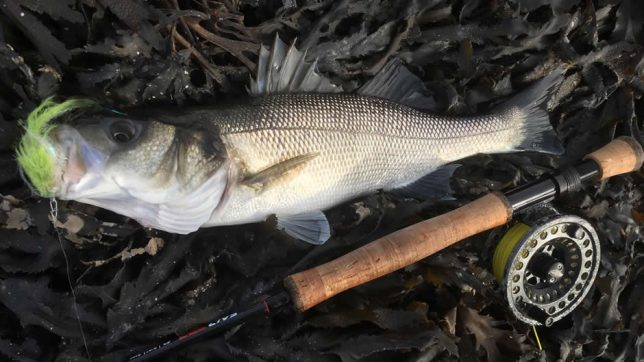 I walk quietly along for about a hundred yards and then go down to the water, stopping where it touches the dry sand. I unhook the fly from the butt ring, false cast about 30 feet of line, and let it drop to the water. It is white and I can see it clearly in the darkness, although it will soon be light. The tide is still flooding and the line is pushed back towards me and generally to my left, as is the way of this mark. I am fishing on the south coast at the western end of the English Channel, so the general direction of the tide is to the east on the flood.

In the darkness now, there is the white of the surf and the sound of the waves, but I don’t feel intimidated by it. In fact I feel an overwhelming sense of wellbeing and almost total happiness. This is a good place for bass, as testified by the huge sign that no one can miss, to warn bathers where it is safe to swim and where it is not. It diagrammatically depicts two sand spits and shows the effect of two currents colliding and the undertow which forms, which could sweep the unwary out to sea. Don’t worry, I’m alone and have no intention of going in much above my ankles until it gets light and I can see properly; then I will loop three or four foot of leadcore to the front of my flyline and get the two streamers out into the disturbed water. My streamers will swim like small fish or sandeels as the front of the line is dragged out by the undertow, and I will hold the rod high and flick the back of the line clear of the breaking waves. I may even catch a bass there, it’s a reliable spot. They are mainly schoolies there, but that doesn’t matter to me any more – I’m fly fishing and I’m happy.

But right now I’m working down, a yard or two at a time between casts, fishing what American flyrodders would call ‘skinny’ water. I’m quietly fishing in a foot of water or less, for those fish we accidentally almost step on when were over eager to ‘let loose in the juice’. Actually I still love my beachcasters and the essence of bass fishing for me is in the surf, regardless of whether I stand there with a multiplier cupped in my left hand and line taut over my thumb, or casting a plug, or throwing a flyline. It is a magical world, the surf, at anytime, but especially at dawn.

When you choose to fly-fish for bass from the shore, you choose to limit the water you can fish, therefore you need to scrutinize the water in your limited casting range, rather like my terriers do when confined to the car headlights. Your attention is focused more closely and you see things differently when you are holding a fly rod. I move along the shore in the half light as though I’m on the bank of a river. The rock a little way out with a wave breaking over it could be a holding spot for a salmon or sea trout (if it were in a river), so could there be a bass here? The current following the wave will have scooped out a little half-moon trench about a foot deeper to the sides and behind. A fish hunting the shoreline could slip into it and momentarily find an advantage, shielded by the suds — a perfect place to pounce on sandeels thrown off-balance by the breaking waves.

I quickly unloop the leader from the flyline and reach into my wading jacket for the little wallet containing six pieces of lead-core trolling line, each length being one foot to six foot long. I take out the two foot length, which, like the others, has a loop formed at each end with a whipping which I had superglued and covered with epoxy adhesive. I quickly thread one loop over and through the braided loop on the end of my flyline, I do the same with the leader and flies, and start arialising some line. I’m standing knee-deep and casting 45 degrees from the shoreline to a spot just in front and beyond the rock which is no more than forty feet away. The trick is to drop the flies (tied 18 inches apart on a five foot leader) just where the wave has broken but before the surge pushes the tackle forward. The leadcore sinks like a stone. Holding the line tight, the surge pushes the floating part of the line over the rock and pulls the streamers around and under the suds, where I hoped there would be a bass.

When the dogs eventually find me I am unhooking my third bass of the session and the third from this rock. I let them have a look at the fish before slipping it back. All three of us understand what we are doing, and why it is important to keep up the practice. For what? No, we don’t understand that. We go home for breakfast.

Two books I seriously recommend are Striper Moon by J. Kenney Abrames (ISBN 187817567X) and Stripers and Streamers by Ray Bondorew (ISBN 1571880720). Chapter four of Striper Moon is entitled “The Surf”; and I would recommend it to anyone, no matter how experienced they are or whatever their methods. I defy anyone not to be enlightened by it.

Mounts Bay is a beautiful place through the eye of a bass angler. It is wild, has long and short sandy beaches, a rocky shoreline, magnificent cliffs and intimate coves. There are no fifty-pound stripers beaching themselves chasing mullet, but there is surf and scenery that is difficult to beat. The predominant southwesterly wind makes fishing an 8 weight difficult to cast much of the time, and a 10 weight, which is still lighter than your spinning rod, is often better. If you are visiting Cornwall, I suggest you give Mounts Bay a try, especially if you can cast a fly.