Nick Cosford and I arrived at the starting point for saltwater ﬂy ﬁshing for several reasons. Both of us have long backgrounds in both river and reservoir trouting, which has given us the necessary knowledge and understanding of ﬂy rods and the types and weights of line that would probably be needed in the surf. Fly ﬁshing gives you freedom of movement and the opportunity to ﬁsh for bass in both large and tiny bays (be they sandy or rocky), over rough ground, and in races, estuary mouths, harbours, creeks and surf beaches. All these marks can be tackled using just one rod! 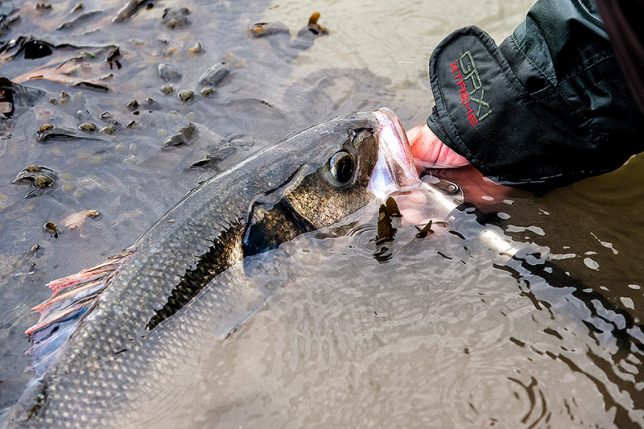 Perhaps more than anything, a large bass caught on a lightweight slender ﬂy rod, very close in, provides the ultimate angling experience. Just close your eyes for a moment and picture yourself waist deep in sudsy moving water, the gulls reeling overhead, and your eyes scanning the water in front of you; the rod is held low and pointing down the ﬂy line, and the left hand is retrieving in slow two foot long pulls; your concentration is total, and then . . . BANG . . . a vicious take is transmitted through your retrieving ﬁngers to the brain in one nanosecond; your ears ring to the scream of the ratchet and the rod hoops over as the bass bolts for the nearest sanctuary. Hooked? I am.

The question of having conﬁdence to try is, for most of us, a new and seemingly minor tactic (set against a backdrop of dwindling numbers of ﬁsh). Now, ﬂycasting deﬁnitely enters this arena for most anglers, as probably the most risqué of all. Nick and I thought about this and rationalised our decision to ﬂy-cast on the basis that we had little to lose anyway. We had often been ﬁshless using conventional techniques in the surf and over rough ground, so the risk factor was negligible. This was important, because conﬁdence (the most vital factor) would have been adversely affected. On the plus side it was going to be a new learning experience and maybe the chance to ﬁsh over some new ground that would otherwise be unﬁshable.

Until recently, articles on saltwater ﬂy ﬁshing for bass have been few and far between, with the emphasis on schoolies. Nick and I feel that there should be no reason why the ﬂy angler should not deliberately target large mature ﬁsh. We are particularly interested in ﬁsh over 4lb.

So what did we need to get started in terms of the minimum amount of the right gear for the lowest cost?

The biggest problem we experienced was ﬁnding a suitable rod. A ﬂy rod for saltwater ﬁshing must be able to cope with impossible winds, rough conditions (salt and sand), be tough, and able to cast a heavy 10-weight ﬂy line up to 30 yards (on a good day) and light enough not to break your wrist. 10-weight line is the minimum weight we found that will cut through a wind, and have sufﬁcient momentum to turn over a large heavy bulky air-resistant ﬂy. We knew that the required rod must not have a super-stiff fast tournament action, which would throw very tight loops and give distance, but would demand too much physical effort to cast, and require better than good timing.

We felt we needed a tool with a medium/fast action with a ﬁrmish butt, and powerful enough for setting the hook, but here’s the rub – relatively easy to load and therefore comfortable to use over a 2-4 hour session, during which you need to cast a ﬂy many, many times. Such a rod we felt would give the caster more control of the loop size and length of the casting arc. This we felt, should add up to a tool that will give good distance when used in conjunction with a double haul and also be pleasurable to use at the same time.

Yes, you’ve probably guessed it, we could not ﬁnd a stock home-grown rod that even came close, and did not fancy the cost of a USA import. So we had to go the customised route and build it ourselves. This did have several advantages, in that we were able to design-in the most suitable components, in particular reel seats and rod rings. The tried and trusted Fuji FP16GS carbon reel seat was chosen along with Fuji titanium framed rings having single leg and silicone carbide centres. The single legs and light weight of titanium results in minimal affect on the blanks action, and the titanium does not appear to rust in saltwater. It is vital to have good contact with the blank, and to do this we speciﬁed a grade A 28mm diameter full wells (scroll) cork handle, which allows a very ﬁrm and comfortable grip, and the 28mm diameter prevents the ﬁngers overlapping which in turn helps to prevent cramp. The blank is unground (for toughness) and mixed modulus carbon, and 10 foot long, two piece with an overﬁt joint. This speciﬁcation was not cheap, but anything of real value rarely is.

It has been said that you need to cast better than just well. Whilst this is largely true, you don’t need to be world-class to throw a good enough line up to 30 yards, so don’t be put off. The solution is to get professional casting lessons before actually getting into the surf; six lessons may well be enough, combine these with Lefty Kreh’s casting video and you will be a good way towards an effective double haul.

The most useful line is intermediate density in a WF10 proﬁle. This very slow sinking line will handle 90 per cent of UK shore ﬂycasting. With it you can ﬁsh just sub-surface by starting an almost immediate retrieve, to around depths of 4 foot if you leave it to sink for long enough. In most shore ﬁshing situations we found that due to wave action and tide ﬂow, you will be ﬁshing typically 4-12 inches below the surface. The next most useful line would be a ﬂoater, which will enable you to ﬁsh over the tops of weed or rocks that are close to the surface, and will also allow very slow retrieves in shallow water.

There is no need to go for American masterpieces. It is possible to utilize quite low cost reels such as the kingsize ‘Rimﬂy’ and the old Young’s of Redditch. These were not designed for saltwater use and have only a simple pull-and-check type drag system. Expect only about two years of useful life and you won’t be disappointed. Both reels have exposed rims for palming, which overcomes their lack of a decent disc drag. Of the two I prefer the Rimﬂy, it is cheaper and has less to rust! If you can get seriously hooked the ‘ABU 6500’ equivalent in ﬂy reels is the excellent System 2 by 3M, which has a superb disc drag and is great for playing ﬁsh off the reel. It is sensible to have sufﬁcient capacity to get at least 80 yards of 20lb braided backing onto the reel, just in case that 10lb ﬁsh comes along. If this makes you smile, trout of 4lb have been known to rip off 70 yards of backing in double quick time, because a ﬁsh hooked on ﬂy gear doesn’t have 5 oz of spiked lead to tow around! 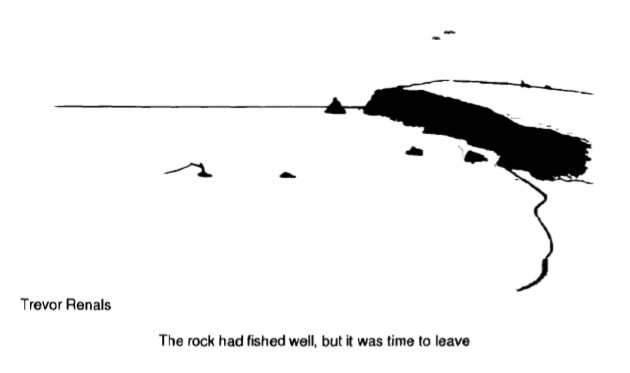 There is no need for the ultra-long 24 foot leaders used by trout men when nymphing. Ten feet maximum is our suggestion, and there is no reason why you can’t reduce it to 3 foot if conditions warrant it. We both like clear standard mono, but avoid hard leader materials that are springy and will not lay ﬂat on the water, giving poor presentation.

Whatever the pattern, Nick and I have ours tied onto 2/0 stainless steel eyed hooks. As to patterns, I have to date only ﬁshed with three. My favourite is a USA import, the ‘Surf Candy’ (4-5 inches long) which is suggestively like a sandeel or large sand smelt. It has an excellent action in the water, and is especially good in bright conditions, where the light causes the ﬂy to sparkle. The second is the legendary ‘Lefty Deceiver’, again around 4-5 inches long. It has a long split-wing design which causes the two wings to come together on the retrieve, and move apart when the ﬂy is rested, giving a wonderful pulsating effect. The third is one that Nick has created, a big white palmered hackle ﬂy with a ﬂexible rubber wiggle tail, which has the most seductive wiggle imaginable, even on very slow retrieves.

Just a simple foam-lined box completes the gear needed. Everything else you will probably already have, such as chesties, a Gye—type landing net, pliers and the usual list of lame excuses!

Historical note: This article was published in BASS magazine no.76 Autumn 1995