Getting it right or getting it wrong?

When it comes to big bass it never ceases to amaze me how many different ways I can find to screw up. I’d claim this is due to there being so many links in the bass fishing chain making it inevitable a factor beyond my control sometimes leads to disaster. A better explanation however might suggest the weakest link is holding the rod. Today I visited the south coast of England for what might be the last time this year. The day was eventful, yet as I sit here reflecting on the events just passed, I can’t decide whether I actually got it right, or once again messed up?

For the past 7 weeks I have been understandable keen to return to the place where I caught a double the last time I fished there. Bad weather and other commitments have however scuppered such plans. In past year I’ve never tried here beyond late November, but still favourable water temperatures combined with a week of offshore winds to allow enough colour to drop out of the water, left believing it was still worth a go. Even if I failed I reasoned, I might somehow soak up the experience, like a lizard in the evening sun, it would sustain me through bass free months ahead.

Frost was scraped from the car before I left and I journey to the coast under a full moon. The Zodiac was inflated and ready to go at sun rise and I cut through the flat sea towards my favourite mark wrapped in numerous lavers to repel the cold. The deeper rock in a rip of tide I tried first failed to produce and soon it was plan B – a nearby reefy shoreline tucked beneath the cliffs. As I started the first drift the fish-finder lit up with bait fish in 15 foot of water. My first cast was bumped hard several times by what felt like a wrasse, so on my next cast when another knock came I tried the trick of not only stopping the lure (a big savage gear sandeel) but feeding a few coils of line off the spool, making the lure drop back. The ploy might risky getting snagged, but it induces enough takes over the years for it worth chancing.

The lure sank but I didn’t feel the typical bump of a take. I just became aware there was more resistance once the bail arm was reengaged, so I wound down and rod came to life. The adversary on the other end felt heavy and bore deep. Convinced it was a big wrasse I tried to bully it up, but it kept deep and dirty, while the drag appeared to be giving up line too easily, leaving me wondering if it had worked itself lose in journey to the reef. I contemplated tightening it but several past disasters due to drag fiddling and was just about wise enough (this time) to avoid such temptation.

When the creature finally yielded and the rod no longer looked ready to snap, another chance of glorious disaster presented itself as I battled to free my new (and optimistically large) landing net from under the seat, but again both my luck and my hook held. The “wrasse” then powered off steadily away from the boat in midwater, rather than towards the sea bed, and I began to suspect the fish in fact be big and silver, rather than technicoloured, fat and goofy.

This hunch was soon proved correct when through the murky water rose a bass which rolled straight into net. The capacious mesh could easily engulfing 40 pound carp, yet the bass still looked substantial as I lifted a pig of a fish into the little inflatable. On the measure carved into the bench seat the fish went 77cm, but this bass was as fat as any big bass I’d seen and my thinking was how far into double figures it would weigh: not whether it would reach the magic ten pounds. The verdict of the scales with the new net subtracted was) was 11 pound 13 ounces. My second biggest bass ever … and all done so easily without any screw ups – or so I though!

I’d left my camera at home so set the iPhone up on a self-timer but wet fingers on the touch screens don’t work well and I struggled to get the app to work. Eventually – and unexpectedly – the 10 second count down 4 pictures began. I now rushed to prop the phone up in the bow of the boat, pull the net out of the water, grab the fish, then stand up enough to display my prize in the frame, given the phone was pointing up high. 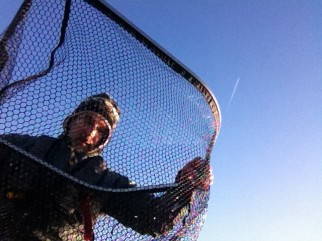 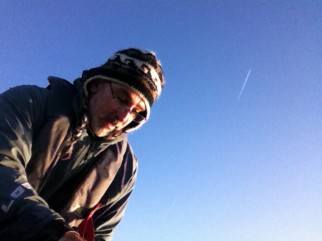 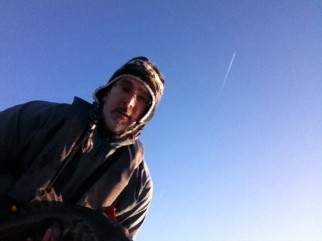 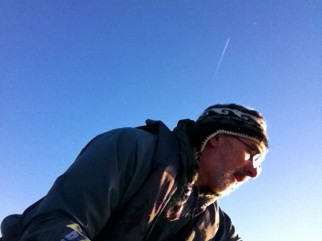 The first 2 frames just caught me looking down trying to retrieve my prize.

The third shows I had just about grabbed her and I was beginning to stand up.

The fourth shows me looking somewhat perplexed, staring at the sea, after she had flipped from my hands, bounced off the boat and swam off.

Had there been a fifth (or sixth, seventh or eighth etc) frame, it would have shown me laughing loudly at my latest way of screwing-up with the big bass.

I called my fishing buddy Julian and told him about my new form of premature release. He however was made up for me and just said “mission accomplished you might as well go home now”. But my early success had (over) filled with me with confidence. I now believed it was only a matter of time until I’d have another double to photograph.

I fished hard all day, but unsurprisingly I was wrong, that was my only bass of the day – not that I cared in the slightest if the truth be told.

So now with my bass season (probably) at its end, who knows when the chance of a repeat chance will come again  Yet even without a decent digital image of my prize I still have the clear image of the “lost” fish swimming in my head. Undoubtedly I will be  frequently studying it in the dark cold months ahead.