I am standing in the surf with a lure rod in my hand. Unusually for me my fingers are not rotating the reel handle but gently feeling the braid. Today my line leads not to a lure but a hook wrapped with peeler crab. My lure fishing companion Julian has remained true to his values. He has wandered off in disgust and is now using the strong offshore wind to assist his lures far out to sea. The shake of his head when he saw what I was up to suggested I should feel cheapened by using (as he put it) “dirty bait.” I don’t. In fact I feel strangely elated as standing with water to my knees, coiled in readiness for THE moment as it brings back many echoes of my angling past.

Although committed to what I am doing, in truth, I don’t actually expect to catch. This is my sixth time of attending the north Wales BASS fish-in and somewhat perplexingly I have yet to catch a bass here. Not that I really mind. The event to me is largely about catching up with friends, making plans for the season to come whilst drinking a beer or two. I do well enough in the rest of bass angling each season. In fact it has been suggested that should I actually break my duck and catch here, it will somehow throw the whole fishing world out of kilter and result in unpredictable consequences.

The line in my finger suddenly pulses then tightens and I feel the light lead tripping the sand. I wind down, my heart rate rockets and the braid kites left. The fish rolls between the boulders and beds of wrack then runs again. My fish-in bass curse however is at the forefront of my mind, and even as I battle the creature I speculate to the form of the imminent disaster will soon befall me. Yet to my amazement my improvised bait rod does not explode and the creature neither escapes nor turns into a dogfish. Soon a fat 5 pound bass is beached in the shallows. Julian and my partner in bait drowning Marc (from whom I have scrounged weights, hooks and crabs), join me and record the long overdue moment. The smile on my face reflects genuine elation.

Julian rains on my parade though; “Hmmmm the gods won’t be happy” he quips. I laugh it off, but the superstitious, primitive, hunter lurking deep within can’t help but fear he might be right.

In the evening we all tuck into one of Steve Butler’s now famous Friday night BASS fish-in curries. The meal is up to its normal fantastic standard being as tasty as it is fiery (though I do notice one or two seem to struggle with the heat). With our bellies full we then all put the world to rights while sampling various homemade damson and greengage gins as well as more orthodox wines and beers. 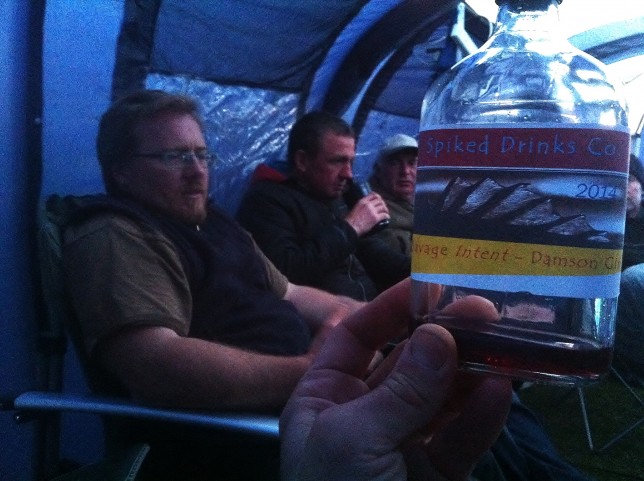 Retreating to my one man tent in the early hours, I am protected from the cold by an unfamiliar warm glow within that is more than purely a side effect of the alcohol and Steve’s spicy jalfrezi.

I am awoken at 6am. The tent is convulsing uncontrollably and it’s surely raining nails. I need to pee but roll over in the hope the feeling will go away. It won’t. By 6.30 I give in and sneak out hoping to visit the nearby bushes rather than trek through a storm to the distant toiled block. Nearby however is a family struggling to tame a tent that has been ripped apart by the unforcast storm and is intent on flying away.

Not wanting to add to their distress, I hurriedly dress and dash off to loos passing several other scenes of developing camp site storm damage. As I encounter another early rising BASS member next to the communal tent we had all been in just a few hours ago. The frame has been crumpled by the furious blow from the (now snow covered) mountains and the canvas flaps furiously like bird trapped in a house. The BASS tent is obviously beyond saving and we both quietly study the wreckage.

“Hmmm, looks like Butler, overdid it on the chillies this time” is his perfectly timed deadpan punchline.

I laugh until I cough, yet can’t help but feel this carnage might have more to do with that bass I caught, than the strength of the curry (or even its catastrophic side effects on Marc.) 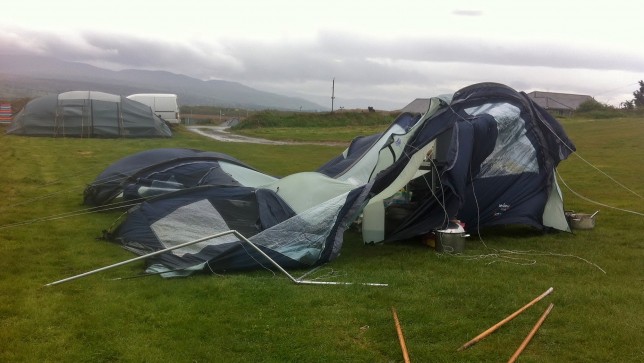 In the next few hours the gale continues and we watch pop up tents cartwheel across the fields. One is pursued by a somewhat overweight man who soon admits defeat and crouches with his hands on knees gasping for breath as his former home bounces over the shoreline and heads out to sea.

One escaped home’s freedom is brief as it is superbly intercepted by Ian and Marc who grab it, ensure there are no small children spinning inside, then anchor it down with rocks. Half an hour later its somewhat sheepish owner appears and retrieves it. On the BASS site itself further damage occurs. Steve Butler’s tent suffers significant structural damage, while another belonging to Tony Spiller that looks so old it’s probably grade 2 listed expires in spectacular fashion as poles crack and the old sun bleached cotton skin shreds like toilet cheap paper. The damage is so great it’s obvious even the National Trust won’t be salvaging it for the nation. Tony looks gutted.

Weather forecasts are consulted and the collective news isn’t hopeful. Members begin to cut their losses and disappear home a day or two early. My plan has always been to leave today, yet after I bundling my (damage free) one man tent and other odds and ends into my car against Marc persuades me into a final session with the crab on the shore. What further harm can it do I reason.

The wind has now halved and is “only” gusting to around 30 miles an hour, but it’s still off shore. The maelstrom however has been sufficient to colour up the foreshore and create a little wave action – ideal for the bass on bait I am told. Marc isn’t wrong: bites come regularly and despite some bad angling, missed takes and 2 lost fish, we still end up with 5 bass between us.

Back at camp after the session we find a pile of unclaimed items from the now cleared site where once stood the BASS tent. The whole of our area in fact is now just an open grassland again, with all signs of the vehicles, tents or belongings gone. I help Marc break camp, load his van and text Julian to tell everyone has scarpered. As I leave the site I drop some rubbish at the skips. The bins overflow with the corpses of tents – further evidence that bass gods are vengeful it seems.

A text note pings from my phone. It is from Julian and simply reads; “See what you’ve done!”

Sheepishly I head off for home.