The best bass beach in Hampshire is no secret – Hayling Island beach receives monthly publicity in the angling press. Odd bass are picked up throughout the year, but it’s the autumn gales in September through to Christmas that provide the best of the ﬁshing. These gales result in vast numbers of slipper limpets being washed onto the beach, and the bass are there to feed on the easy pickings. One 3lb 8oz ﬁsh that I kept had no fewer than 180 in its gut, nothing else, so total preoccupation. All were perfectly shelled. I don’t know if bass can remove them from their shells, or if they feed on limpets that have been washed out of their shells. By contrast, codling often contain limpets in their shells, as well as hermits, whelks, white rag and baby sole. As there is such a variety of food available, why do the bass become so preoccupied with limpets I wonder? 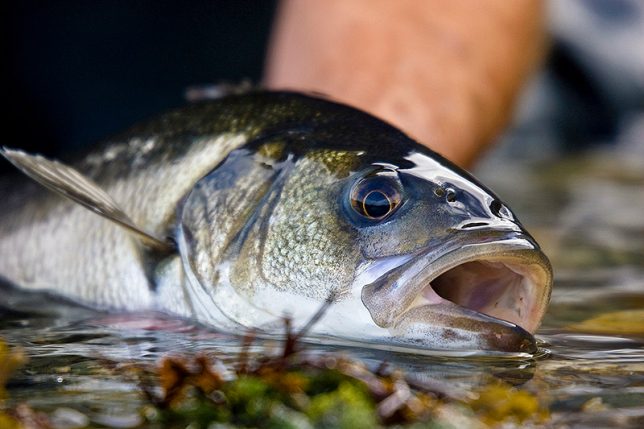 Hayling suffers a fearsome surf during strong onshore blows (SW through SE) and it is generally unﬁshable, but it pays to be there as soon as the sea begins to settle down, because that’s when the bass are there, not a day later because they will have gorged themselves by then. In daylight it’s easy enough to walk the beach to ﬁnd a spot where piles of slipper limpets are being washed ashore. That spot is a good place to ﬁsh, and after dark the cluster of Tilley lamps will tell you the same thing. But all is not lost; you stand a chance anywhere, because the ﬁsh almost certainly swim parallel to the beach. 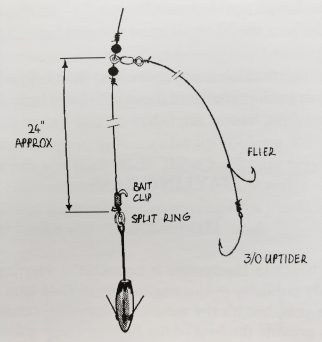 Tackle for this venue is normally a 3oz bass rod and a 6500 size reel with 15lb mono. Lighter line will soon fall foul of abrasive seaweed, and wired leads are preferred because rolling leads seem to always roll the terminal tackle into knots and kinks. Leads are 3oz minimum, changing to 4 or 5oz lobbed when conditions dictate. A bait clip is essential, and I use a 3/0 Pennell rig with the inner hook as a ‘ﬂier’ (free to slide).

There is only one bait worth using, slipper limpet of course. You should be able to pick them up at Hayling as you ﬁsh, but it’s easy enough to keep a stock. They will keep for over a week in a bucket kept in the shade. They are very soft, hence the need for a bait clip, and you need a lot of them – twelve or ﬁfteen make a respectable bait. After separating the stacked shells and scooping out the limpet ﬂesh (a stubby screwdriver is ideal). I fold each limpet double and pass the hook through twice, thus giving support at four places, and thread it up the hook and trace. You end up with a bait some four or ﬁve inches long. The ﬂier hook is then slipped down the trace and embedded in the top of the bait.

I ﬁsh the rod in a rest. The typical bite is one violent pull. The ﬁsh is either on or off, and if it’s off you won’t get a second chance because all the limpets will have come off the hooks. If you don’t use a ﬂier hook you will miss an inordinate number of bites from ﬁsh which grab the ‘wrong’ end of the bait.

What’s the snag? Well, the bass tend to be on the small side, but they have been taken to double ﬁgures with a 10lb 10oz ﬁsh caught on a lug/squid cocktail ﬁshed well out, presumably meant for cod!

Historical note: This article was published in BASS magazine no.46 February 1988