I Wish I’d Seen That One

I Wish I’d Seen That One by Donovan Kelley

It was undoubtedly a big one, much bigger than the 3-pounders I had been catching. On feeling the rod she took off at speed down the estuary, heading for the open sea beyond. At the bar, some hundred yards down from where I was wading, she hesitated. There would be only a few inches of water there – and the tide was still ebbing. I sensed she was faltering and retrieved a few yards of line. Then everything went slack: she was coming back upriver, very fast – too fast for me to keep contact, hard though I wound. There was a mighty swirl just in front of my waders, then she was off downstream again. I resumed contact. Then once again everything went slack: this time, for good. She had shed the hook. 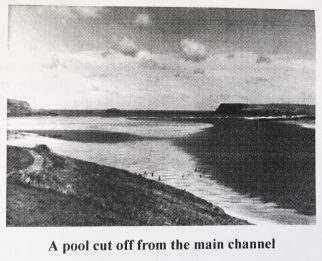 I wound in sorrowfully and scrambled ashore, kicking myself for not having done so as soon as I found myself into a big one. It is so much easier to maintain contact from the sands – especially in darkness, as this was.

I kicked myself too for not having switched on my chest light as soon as she swam back to me: at least I would then have known just how big she was. It is not knowing the size that grieves me, when I lose a good bass. Most anglers seem to be different, regretting most the ones that show themselves before escaping. I have never felt that way. It is the ones I don’t see that upset me – perhaps because I have always kept a diary and like to record facts, not speculations.

I have lost many good bass without seeing them, and I still remember them all. Most were hooked on light leger tackle, but some were on float tackle with live prawn. The prawn is fished shallow, a mere 4 or 5 feet below the float, but one rarely sees the bass until it is beaten and ready for the net. One which I specially recall made off seawards as soon as she felt the hook, not fast but with a power that seemed unstoppable. When she had gone 50 yards or so I began to wonder what size she could be. I had caught one of 7½ lbs a few days before, at the same spot. This one felt much bigger. She was still going at the same, sedate but irresistible rate when, for no apparent reason the hook came away. That was another one that I would dearly like to have had a sight of.

On one occasion of ill remembrance I lost four good fish one after the other – and caught none. My diary says two were 5 or 6 lbs. But that was guesswork: I cannot remember that I saw any of them. What I do remember is the cause of the loss: nylon stretch. I was using a new type of monofilament – and it did stretch! I tested it later and found that at 40 yards, the distance to my bait, a stretch of 7 feet had to be taken up before the 4/0 hook could penetrate above the barb. I never used that monofil again and have stuck with terylene or micron whenever possible.

That was on what was later to be my local estuary, the Camel. Some years before, I had thrown away a similar chance of a nice catch of good sized bass, on the other side of the same estuary. It was a family visit but I managed to squeeze in an hour or so’s fishing. I was not hopeful of success, even less so when I found that the spot I had marked out for a try was a pool cut off from the main estuary channel. It was lowtide, and the pool was no more than 100yards long by half that in width. Depth I could only guess at: the water was too deeply peat-stained, after torrential rain on Bodmin Moor. 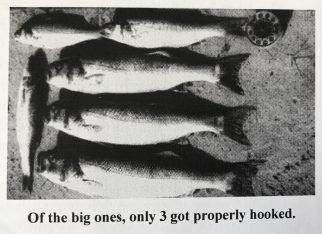 But worst of all was the wind. The paper next day said it had been 84 mph: I could well believe it. Holding the rod was impossible: the best I could do was to wedge it among some handy rocks and watch for the reel to run out. And run it did – repeatedly. The pool seemed full of bass, some large, some about 2½ lbs. The large ones mostly escaped – it was impossible to time the strike properly in that wind, and only three got properly hooked. They weighed 7 to 9 lbs, and I don’t doubt there was at least one ten-pounder among the ones I lost. I wish I could have seen them – and that I could have stayed on for another hour. But it was time to go – and I took much longer than I intended, getting back to the family against the ferocious wind.

In the next few years I fished that pool several times and always had 2 or 3 bass.
But I never again found large bass present in such quantity – there or indeed anywhere. The pool has gone now, a casualty of the perennial changes which occur in sandy estuaries, in the configuration of channels and banks.

Contrary to most of my mishaps with large bass I have no recollection whatever of what was probably the largest of them all. But my diary does not lie. It was shortly after the war, and I was wading over an estuary bar in West Cornwall. I had just made my first cast when there came a very strong bite. It was clearly a big one, but it had hardly got off the mark before the line went slack. It had caught me napping, coming so soon after the bait had settled, and I probably held it too hard. When I wound in I found the large “Model Perfect” hook almost straightened out. It was the first, and so far the only, time that a hook has let me down. It must have been a very heavy fish.