It was a warm day and I was fishing a mark I’d never fished before, an estuary and a big one. I was looking forward to it but in reality I knew I was too late, work had kept me occupied and then I hadn’t a clue where to park up for the best spot so by the time I was at the water and ready to go I had missed the high tide by a good few hours. Indeed it was getting closer to low tide and as I wanted to fish it down, I pretty much knew I would struggle.

The cloudless sky was a delight for anyone not trying to catch bass. With hardly any wind however, at least I would be allowed to present the lure in the manner that I wanted. Fishing a run of tide, or an estuary involves using the water to move the lure. Cast it up, let it come down. Repeat. I could think of worse ways to spend an afternoon, and of course I was checking out a new mark and low water is always a good time to do that.

I waded through gin clear sea onto a finger of rock that approached a shallow area, casting and skipping the soft plastic over the top of the water trying to think like a fish. I failed. No bass were present, or if they were they refused my paltry effort. I moved on back to the running tide of water.

A small open boat passed by moving quickly with the current. It hugged the far bank its speed belying the small outboard motor as it looked to be going about 20 knots. There were four people in it and they looked like they knew what they were doing, but it was hard to tell. Going down tide they obviously were going to come back up on the rising tide as there was no way that engine would push them up current as soon as the tide had turned.

I carried on. Cast up, wait, reel in, repeat.

After a good long walk I neared what was clearly the channel close to the ocean. In fact the ocean was a good half mile away but the sand stretched out like only a sandy beach can and as I’d caught no fish with a long drive back home ahead of me I knew that this was the end of the line. The channel was reasonably wide forming a good sized sea pool, and beached on the other bank was the craft I’d seen earlier. Only then did I realise why they were there.

Removing the engine one man proceeded to row out; one other fed the net to trail behind it whilst two others on the bank walked alongside to create a purse. Of course it was all clear to me now. The fish would come to rest up here waiting for the flooding tide. 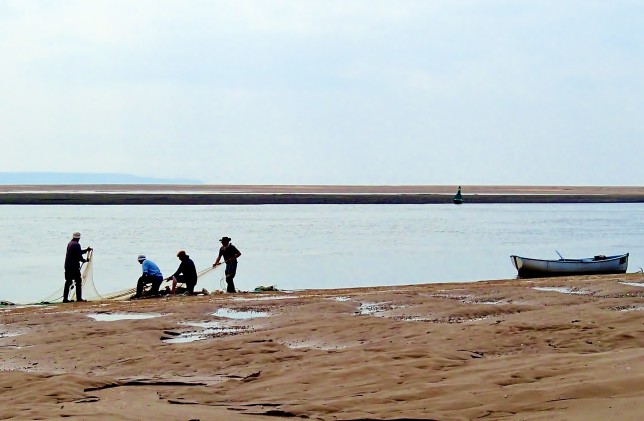 After one unsuccessful haul, they moved over to ‘my’ bank. I sat down to watch, quietly fuming. They hauled the net twice before I’d seen enough, catching a nice bass and what I presumed was a sea trout. They were, apparently, just outside the bass nursery area. Why it ends where it does I don’t know considering it’s a good mile to the open sea – but perhaps I now know what contributed to me not catching any.

‘Lovely day’ I said as I trudged past.

Their surly faces said it all. ‘It is, pity there aren’t any fish about’ one said

‘I wonder why’ I sarcastically questioned; the blazing sun making my already red neck a deeper shade of crimson.