In the zone with bass blog team

An offer over the summer months of 2014 to attend the inaugural BASS blog team meeting in November initially sounding quite uninviting.

Firstly it was to take place in Northern France, and the astute amongst you will have already spotted that this entails a ferry trip – in November. Usually a month of gales and sideways rain.

Secondly, it was going to involve being afloat in small inflatable boats along treacherous unfamiliar coastline. Being an unapologetic fair weather and fair seas bass fisherman you can imagine that whilst one cannot exactly (ever) refuse an invitation to go bass fishing I wasn’t exactly looking forward to it.

Thirdly I had to get the agreement of the management committee at home. When I mentioned a few days in France I think she initially got the wrong end of the stick. Finally after a period of negotiation, involving reassurance that the trip was purely for the benefit of readers of the bass blog, permission forms were eventually stamped and returned with scribbled notes attached along the lines of ‘I’ll make sure you pay for this’.

So as the sun set on a frosty Thursday afternoon I found myself at a service station on the M4 waiting for Matt. Whether we fish for half a day or one week the amount of gear is always the same – a lot. Two boats and two engines plus associated paraphernalia all adds up, then again it always goes in somehow and before long we crept off to the ferry.

Having had visions of trying to sleep on a roller coaster overnighter the crossing promised to be as calm as it could be. As an added bonus the French boat had an excellent restaurant, and a decent wine list to match (which obviously for the sake of staying fresh for the bass buisness ahead we completely avoided!) That evening we excitedly spoke of how the trip was a chance not only to try and catch some good fish, but also to fish new water with new methods, getting away from our bass fishing comfort zone. That night we dreamt sweet dreams of foreign, French speaking bass.

Expectation and anticipation were quite obviously very high and remained undiminished the next morning by the sight of calm and clear water as we dashed along the coast to meet the French correspondant. It seemed the Zodiacs would get some use. Soon we were afloat and wholy engrossed by fishing –  a state of affairs that didnt change for the whole trip.

When not chasing bass we found the luxury of this ferry hadn’t ended at the gangplank and we had swapped one comfort zone for another, as we were panpered by the incessant and incredible hospitality of the French BASS blogger and his lovely family. Matt and I think that a sandy beach (rather than a rocky one) to lay our heads on at night is bass fishing luxury, so to be treated to platters of sea food and vintage French wines whilst our sodden kit dried out was almost too much to bear.

The bass fishing itself was reassuringly difficult. Our days afloat, soon curtailed by an onshore blow, were spent trying to find the fish; who mostly kept their heads hidden until late on towards the evening when the display of Bottlenose dolphins around and under the boats woke both us, and the fish up with good bass of 8lb and 6lb landed soon after. 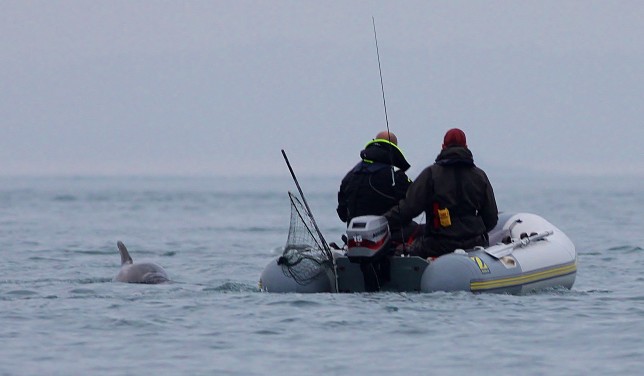 The shore fishing proved equally as memorable. Night fishing isn’t something I’ve done a great deal of, but will do more now. Matt’s 8lber the highlight.

The onshore blow didn’t liven the fish up with numbers, but I managed a daytime 8lber from a gulley whilst trying to be a ninja battered by driving rain and half a gale.

The rough and tough conditions adding a wonderful contrast to the day earlier with the added dimension of trying to keep your feet planted on wet rock when pounded by driving and dumping waves.

When the storm blew through, our final hours in France were spent hopping about the rocks flicking un-weighted soft plastics. Back in our comfort zone, it was all beginning to feel a lot like home.

Looking back on those few days, I am not actually sure I overheard any talk about the bass blog occouring – unless endless talk about fishing counts. I can however report I travelled back tired but with a head full of memories and belly full of seafood. November had turned out to be not such a bad month after all.