“From 1 January to 30 June 2016 in recreational fisheries in ICES divisions IVb, IVc, VIIa and from VIId to VIIh, only catch-and-release fishing for sea bass, including from shore, shall be allowed. During this period, it shall be prohibited to retain on board, relocate, tranship or land sea bass caught in that area.”

“In recreational fisheries, including from shore, not more than one specimen of sea bass may be retained per fisherman per day during the following periods and in the following areas:

New restrictions on bass come into effect on 1st September 2015. This includes a new Minimum Conservation Reference Size (MCRS) of 42cm and a daily 3 fish bag limit per person for recreational anglers.

The following information is taken from Bass: nursery areas and other conservation measures published by MAFF, now Defra in 1990, with additional legislation introduced in 1999.

Any bass landed, stored, sold, displayed or offered for sale, and taken from the waters surrounding the United Kingdom, must be at least 36cm in length as measured from the tip of the snout to the end of the tail fin. Any bass retained on board a vessel or transhipped must also exceed 36cm. These provisions apply to both commercial fishermen and anglers. Any bass below 36cm must be returned immediately to the sea. 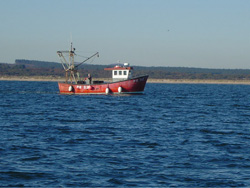 The minimum landing size of 36cm applies to all bass taken from regions 2 and 3 of [European] Community waters, stretching from north of the Shetlands to Gibraltar. This requirement forms part of the European Community’s technical measures for the conservation of fisheries resources (Council Regulation (EEC) No.3094/86 as amended by Council Regulation (EEC) No.4056/89). Note: higher size limits have been implemented locally by some Sea Fisheries Committees, for example 37.5cm in Cornwall.

The use of gill and similar enmeshing nets, with a mesh size between 71 and 89mm, is prohibited within British fishery limits lying south of lines of latitude drawn through Haverigg Point in Cumbria on the west coast and Donna Nook in Lincolnshire on the east coast. Exemptions exist for:

These controls do not override any more restrictive measures such as the byelaws of local Sea Fisheries Committees (whose jurisdiction extends out to the 3 mile limit) or of the Environment Agency [National Rivers Authority].

Fishing for bass from any vessel, as well as, fishing for any species of sea-fish using sand-eels (ammodytidae) as bait, is prohibited in 37 separate areas for all or part of the year. These areas, their extent and the seasonal duration of the prohibition are set out below. The legislation is Statutory Instrument 1999 No 75 The Bass (Specified Areas) (Prohibition of Fishing) (Variation) Order 1999).

The nursery areas comprise river estuaries, harbours and power station outfalls where juvenile bass usually predominate and are more easily caught, particularly during the summer months. In certain nursery areas, fishing may also be subject to other restrictions implemented by the local sea fisheries committee or the Environment Agency [National Rivers Authority]. Such restrictions may include prohibitions on the setting of fixed nets or restrictions on the use of mobile gear.

The prohibition on bass fishing in nursery areas does not apply to fishing from the shore. However it is expected that shore anglers and their associations will respect the need for this prohibition and return to the sea any bass caught within nursery areas.

Responsibility for the enforcement of the measures outlined above rests with the fisheries departments and their sea fisheries inspectorate. The inspectorate is assisted by the officers of local sea fisheries committees who are empowered to enforce both national and community conservation measures.

Any United Kingdom owned vessel fishing for profit must be registered as a fishing vessel under Part II of the Merchant Shipping Act 1988.

An Order was made on 22 december 2004 closing the pelagic bass pair trawl fishery in the western Channel within 12 miles of the coast of England to reduce cetacean bycatch. An amendment order was made on 13 january 2005 to ensure smaller pair trawlers may continue to participate in a fishery for which no dolphin bycatch had been identified. Both orders have been published via Her Majesty’s Stationery Office.

Work by the Sea Mammal Research Unit, funded by Defra, trialled the use of exclusion grids to try and reduce bycatch. The research showed that there is no easy or early technical solution to reducing the bycatch in this fishery through the use of such devices. The order will only affect those using pelagic pair trawls targeting bass within 12 miles of the coast of England within ICES area VIIe. Other bass fisheries, such as gillnetting and hand lining, and pair trawl fisheries targeting other species will be able to continue.

The intention to act in this way was announced by Ben Bradshaw, Fisheries Minister on 27 september 2004. Consultation with interested parties took place in october – november on the terms of the prohibition outlined in the draft Statutory Instrument. The consultation period was limited to 3 weeks and was mainly intended to ensure that the technical detail of the prohibition correctly targeted those vessels about which there had been concern. Responses highlighted that vessels under 221kw are capable of pair trawling for bass and this derogation has now been removed. The results of Defra’s assessment of the potential impact of the proposed legislation is available in this explanatory memorandum and regulatory Impact Assessment published on the HMSO legislation website.

The UK Government also wrote to the Commission requesting that it acts under (Article 9 of Council Regulation EC (No) 2371/2002) to extend this closure to vessels of other Member States who have access to this area. Read a copy of that letter.

As a result of that letter, the Commission wrote to France requesting that the French Government also impose a ban on pair trawling within their territorial waters. So far the French Government has declined to act, despite continuing pressure from organisations such as Greenpeace and Collectif Bar Europeén (CBE- French equivalent of BASS)