In the aftermath of the 2012 South Devon Bumble, chief organiser and BASS member Nick Bennett and chief bottle-washer and BASS member (me) were to be found sitting, drunk and forlorn on the wall overlooking the beach at 1.30am.

One bass was all the masses had landed over the weekend.

We’d had a brilliant time with plenty of laughs, but the lack of silver weighed heavily on our minds, predominantly due to the flat calm and very hot conditions. All we had wanted was a shift in the wind and some swell and we knew all would be well….

With the formalities of the SDB over with, Nick and I had a drunken discussion and made a plan as we sat on the beach listening to the long prayed for south-westerlies whipping up the bay into some semblance of ideal conditions.

Groggily we emerged for a late, late breakfast, thankfully time and tide were on our side today and we leisurely attired and wandered out to the bay, heading left.

We stopped just before the ascent to the rocks and as Nick tied on a leader, we noted that no-one was out on the point – despite the fact there were still around 15 or so bumblers lurking about!

Without needing telling twice, we headed right, clambered up and hit some gullies. The first hour was quite uneventful, I had a couple of enquiries on my Duo Terrif and a Daiwa shoreline shiner. Nick was also reporting quite a few knocks and all seemed to be in place.

I snagged up a few times on the thick kelp whilst waiting for the tide to flood up a bit and had to make one precarious trip out to rescue my shiner (which was firmly locked onto a stipe of kelp), under the gaze of Nicks camera lens, which was of course poised to snap the moment I tumbled head first into a 12 foot deep gulley!

On went my savage gear eels as my quest continued and I turned to watch Nick head due south and wander off the face the surging flood, at the edge of the reefy drop-off. 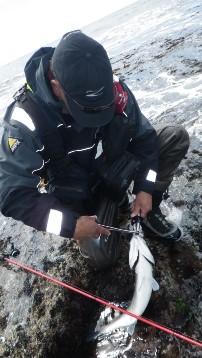 Without much ado, Wallop! Nick’s Tenryu RodBar 270 hoops over and Nick, at last, yells “FISH ON, HERE WE GO BABY!!!!”

I run out to the point and arrive just as Nick is hauling in his prize, the long awaited bass that arrived as predicted by Nick, with the improved conditions!

Out with the forceps, Nick efficiently removes the hooks and this feisty girl is put on Nicks boga and comes in at 4lb 4oz and 54cm on the ruler!

Nick and I are whooping it up and carefully Nick puts the lovely bass back -in she goes and with a powerful flick of the tail she’s gone. 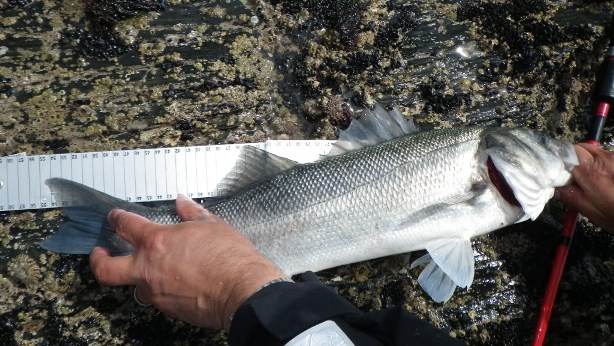 Nick installs me on his spot and I clip on my DC12 Terrif in Ayu and launch it out there. Two or three minutes and WHACK, I’m in, this time it’s my turn, I hit the fish and, slack, she’s gone! Dammit!! The tide surges up, Nick is getting hit to my left again, Nick yells at me to move back (that’s my five minute warning!) then I’m in again, and the fish comes off again!

WHACK, I’m in AGAIN and once again the fish spits the lure, the air is now blue, Nick is now frantic as the tide is flooding behind us, I thrash the lures out repeatedly, the fish are going nuts out there!

Nick yells “you REALLY need to move back boy!!!”

I can’t stay! I’m so close to bagging my bass but getting cut off is a real possibility so Nick practically orders me off the point and rightly so, we have a bit of a trial hopping back and I am waist deep but with some mighty leaps and scrambles I get back away safely from the surging tide and swell…. 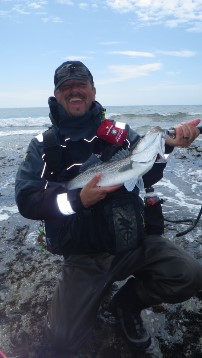 I am buzzing, despite the lost fish, I am so pleased for Nick, he’s been telling everyone for three days that all we needed was the wind around and all would be well, it’s almost poetic that Nick himself has nailed the fish to prove his point. High 5 !

I may long rue the day that I had the opportunity to wallop him and messed it up!

The weekend is open to all members of www.thelureforum.com and www.ukbass.com and is a great opportunity to meet fellow lure anglers with catch and release of our precious bass resource very much encouraged.