In the aftermath of the 2012 South Devon Bumble, the conditions just got better and better. I arranged to meet up with South Devon top-water bass specialist Dave Campbell. I arrived extremely early at the rendezvous point – in fact I beat the locals to it!

Wow, it was perfect, huge swells running in at 6′-8′, eerie sea-mist, cool air and overcast.  Surfers everywhere. All good signs. Wasting little precious time, we all headed for the point and awaaaaay we go.

The swells really were smashing in, many times we got nailed, we felt the power of the ocean here tonight, can we winkle a fish out?

Presently BASS member Terry Pendlebury from N Wales wandered up, he’s had a great week at SDB HQ and will be the first to say that he learned a lot from fishing totally different conditions to his local spots. Terry has been firmly adopted by the South West pluggers and become a great new friend to us all. He does think we’re insane though!

Dave clipped on the Terrif DC-9 in grey mullet and whipped it out into the bay.

I was only two feet away from him at the time and as I was having a chat with Terry, Terry goes, “hey up, look at that”. Dave’s Hearty Rise is buckling like a wild thing and he has a FISH ON !!

After a minutes or so’s tussle Dave has the fish under control, Terry takes my rod and I jump down a level, fish grips at the ready and haul the fish in for Dave.

We bring her up and retreat away from the swells to conduct the formalities… Dave unhooks her and I unlimber the ruler. Without further ado, here’s the glory! 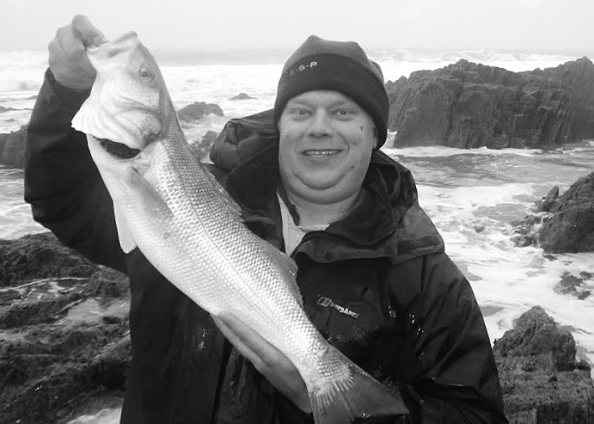 After a couple more photo’s Dave carefully put her back and adrenline pumping, we went back at it! We fished on for half an hour then I decided to check our route back as the gullies were filling behind us at an alarming rate. 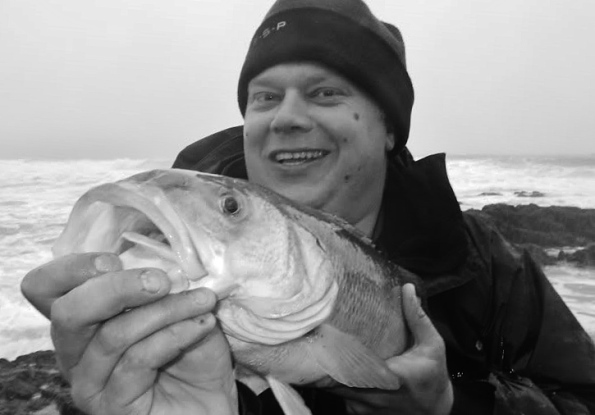 Long story short, following many graceful leaps, much lithe rock-hopping and some perfectly synchronised wading Dave and I finally made it back to terra-mica via the circuitous route, the last gulley bridge was long gone.

We weren’t done yet, so we trotted over to the other side of the bay and tried out some savage gear eels into the surf. The incoming tide swells were even fiercer over here. But no further fish to report. 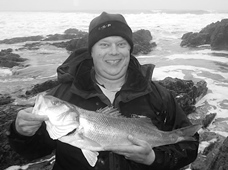 The night belongs to Big Dave and I for one am absolutely delighted – IT’S A CLONKER !!

The weekend is open to all members of www.thelureforum.com and www.ukbass.com and is a great opportunity to meet fellow lure anglers with catch and release of our precious bass resource very much encouraged.