I trudged along the beach at dawn, the shingle crunching under my feet, and the sounds of small breakers washing the stones as the tide began to turn. Ahead I could see the figure of another angler, already set up and watching his rod tip intently. I knew he could hear my approach, but he seemed to be totally focused.

The rod tip suddenly darted forward and the rod bent toward the surf. He grabbed the arcing rod, and pulled back against the force that was trying to drag it seaward. I stopped in my tracks; this was no 3-pounder (which is all I ever seem to catch these days). The guy’s reel screamed as the fish stripped off line, running parallel to the beach towards me. 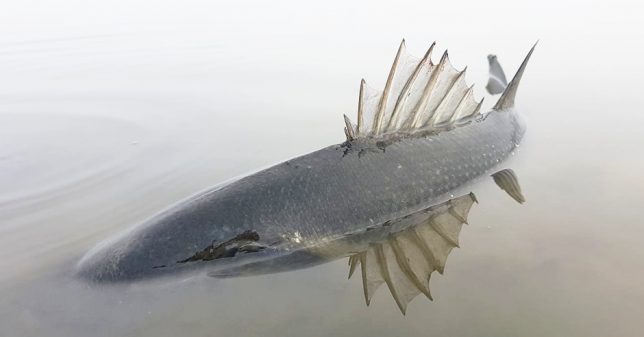 He stopped the run, and wound down quickly, walking toward me at a fast pace. The fish took off again, this time toward the horizon. The reel screamed again, as I watched the rod top dancing. Again the run was stopped and line gained. I watched spellbound for what seemed to be an eternity as first the angler, then the fish gained line. Eventually it was over, and the fish beaten, struggling weakly on its side.

“Would you like me to net it for you?” I called out. “No thanks” the stranger replied, stooping down toward the fish. I saw his hand take hold of the hook, and without lifting it from the sea, he deftly unhooked the fish.

I’d done that often enough myself with a decent lure caught pike, but this bass was at least 12lb, a fish of a lifetime for me, worth a roll of film at least! And now it was swimming free, regaining its strength and heading seaward.

“Christ!” I exclaimed, “You could at least have let me take a picture”. The guy was grinning all over his face. I knew that look of complete happiness. “If you want to take a picture, I’ve got another three over here”

He pulled back the wet cloth to reveal the three biggest bass I’d ever seen. I gasped. “I just take a couple for the freezer, the rest I let go, that’s seven I’ve had this morning.” “Look at that will you!” He pointed to surf where there was a sudden boil of mackerel. “Cast your lure behind that lot”. Not waiting to be asked a second time, I did just that.

I saw a flash of silver behind my lure, felt a pull and struck. Not daring to believe my luck, and for just a moment I thought I’d struck lucky, as the rod tip bent low on the fish’s first rush. But then I realized I’d hooked a mackerel.

“It’s just a mackerel”, I said to my companion, as I reeled it in, fighting for all it was worth against the 30lb braid, then Wham! The mackerel was hit and it was the turn of my reel to sing …. For just a little while. Suddenly, it all went slack, and I reeled back in the lonesome lure – feeling pretty sick.

I shouldn’t have worried though. In the next couple of hours I bagged a few bass, all over 10lb, and watched my companion take a few more. This was bass fishing like I’d never known it. And it all felt so unreal.

It was during a break when I got chatting to Paul (I found out that was his name), that things became clearer. “It’s a wonder that the pair trawlers haven’t had all these fish” I remarked.

Paul looked at me quizzically, “What do you mean?” he said.

“I’d heard that the pair trawlers take all the adult bass as they shoal for spawning in the Western Approaches” I said.

“Who told you that?” he asked.

“Oh, something I heard” I replied, sensing from his voice that I was talking nonsense.

“I don’t usually fish the sea” I lied. “I usually fish for pike, so I’m a bit new to this game” I offered in explanation.

“Oh!” he remarked, “Well don’t worry about pair trawlers, if they tried something like that the EA would have their boats straight out of the water, and the skippers in jail, so fast they’d think that they had grown wings” he grinned.

“Yes, the Environmental Agency who I work for” said Paul. “It’s our job to make sure that there is plenty of fish in the sea for everyone”.

“Hmmm! I seemed to have wandered into another parallel universe” I thought to myself.

“I’m new to this sea fishing game, so I don’t really know how things work” I explained. “Don’t the commercial fishermen try it on?” I asked.

“A few do, and pay the price” he replied. “As I said, it’s the EA’s job to look after the seas, to make sure that it contains the maximum amount of biodiversity possible. Not just for the commercial fishing industry, but for the recreational sea angling industry, the tourists who visit the seal colonies, the bird watchers who visit the bird colonies, and the tourists who just like to dabble off the end of the pier, while the wife and kids shop in the town. Not forgetting the charter skippers and tackle shops” he added.

“But what about the commercial fishing lobby?” I asked, “Don’t they want to grab as much as they can get?”

“Some do” he replied, “But I think that we have educated the public that the sea has just so much it can give. Take too much, and the whole pack of cards is likely to crumble. The boats and the companies that own them have a licence, which pays for policing them. If they try it on once too many times, they lose their licence, get hit by heavy fines and go out of business. Believe me, there are plenty waiting in the wings to take up the licences that are revoked. Anyway, the way we manage the sea, there are far more fish coming out than there would ever be if we let it descend in to a free for all. And not just for this generation, but for the generations to come”

“Ever heard of Defra?” I queried.

“What, the shower that run the rivers?” he replied. I noticed that his expression had changed. There was a look of anger in his eyes, creases showed across his forehead.

“Glad they don’t have a say in what happens to the sea. The way they cave-in to anyone who wants to extract more water! I’ve never known them take a polluter to court. Too keen for the money from the ‘licences to pollute’ I suspect. Pretty soon, the only stuff flowing in the rivers will be effluent. I can’t understand why the freshwater anglers put up with it.”

“Still? he winked, “I reckon that we’ll soon have them sorted out. After all, all of that pollution ends up in the estuaries, and that’s our territory. If they can’t look after the environment that they are supposed to be managing, well … we’ve proven that we can do the job.” He was grinning again.

As I trudged back up the beach toward the car, I heard the screeching of gulls behind me. A trawler was cruising along parallel to the shore. I looked back to where I had last seen Paul.

He wasn’t there. “Damn! I never took a photo of those bass’, I cursed.

The car wouldn’t start. “Welcome back to the real world” I muttered as I reached for the mobile.