Just For The Record

Just For The Record

It was the start of my annual holiday on Dover’s Southern Breakwater, in search of the large bass which frequent the area. My first session would be on the ebb on Saturday 3rd September 1988, with low water at around 09.30. This would be the time to start fishing as the bass seem to only feed in the strong moving water at this venue.

Tackle was to be rather heavy, due to the large leads needed to hold a big bait on the bottom. My gear was prepared, a 12 foot carbon beachcaster and 7000-size multiplier loaded with 25lb mono. Terminal tackle was a 6 foot flowing trace with a 2-hook Pennell rig, both hooks honed very sharp. My favourite bait, half a mackerel, was not available so I used a whole Calamari squid, which had accounted for several large bass in the past from this mark. 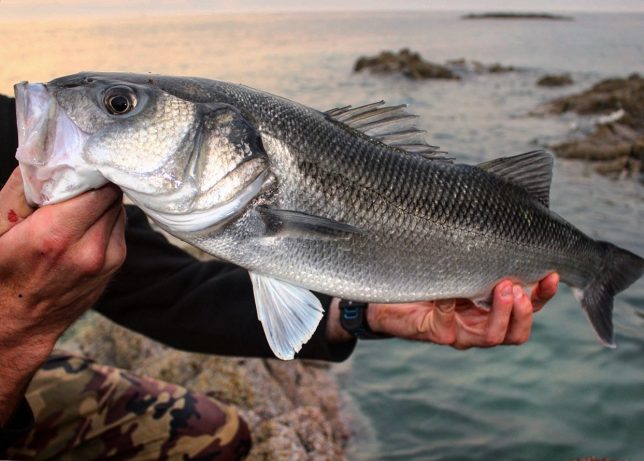 My fishing companion Chris and I were in position at around 09.45 with baits out and the waiting game started. Three hours went by with no bites. At around 12.45 with ¾ hour of useful fishing time left, new baits were cast into position, and about 5 minutes later I had two or three taps on my rod followed by it arching over as the fish moved away. I set the hooks and it immediately took line, after which I managed to gain line steadily until I saw a swirl in the water about 25 yards away. That was the signal for a very deep and powerful dive, which made me realize that I might have hooked a 12-pounder – something I had been after for a very long time. I got about 10 yards of line back before it dived for the bottom again. This was to be the last bid for freedom, and with steady pressure it came to the surface. That’s when I got the shock of my life! Chris had brought the dropnet within reach and was now looking at the fish surfacing for the first time; he said something that I shall never forget, quite simply, “What have you done?”

From this point onwards the fish was mine, it just lay on its side on the surface and slid into the net with ease. We both stood back in amazement at its sheer size and perfect condition. I was lost for words, but Chris said, “You’ve got the 12-pounder you wanted!” I took the hooks out and noticed that it had a wire trace with about 20 feet of line hanging from its mouth, which I removed as best as I could. Now was the moment of truth. I put the bass on my Avon scales (the type with the little window that changes colour to tell you how many times the needle has gone round). To my amazement I read 11lb on the scales, but then I noticed that the little window was green, which put the fish at around 19lb. Chris asked how much it weighed, I said, “Read the scales and tell me”. “19 pounds” was the answer, and that’s when I started to shake!

To cut a long story short I got the fish weighed on two sets of official scales within 45 minutes. One set measured 19lb ½oz. The other weighed 19lb ¼oz. The scales were checked by the Weights and Measures Department and the weight claimed was 19lb ½oz. The fish went to the Natural History museum for verification, and was confirmed by the British Record Fish Committee as the new British shore-caught record. It then went to Paul Taylor of B.A.S.S. to be mounted for display at the Dover S.A.A. headquarters.

For the rest of the holiday week I returned to the breakwater but as you would expect, the edge went out of my bassing for a couple of days. After that I was back in full swing and caught bass of 4lb 12oz, 6lb 7oz, and 8lb 6oz.

It’s a funny thing but now that I’ve caught the fish of a lifetime it didn’t seem that difficult. I know it sounds strange, especially after trying to think like a bass for nearly 20 years, but once you’ve found where the fish are feeding and worked out how to catch them, the only thing you cannot plan is the size of the fish that actually takes your bait!

This fish measured 35½” in length with a girth of 21”, and beat the previous shore-caught record by 4½ oz. From scale measurements, Donovan Kelley determined the age to be 19+ years old. The fish was indeed set up, and was on display at the 1989 Annual General Meeting of B.A.S.S.

At the time of going to press a fish of 19lb 11oz 12dr was awaiting ratification as a new shore-caught record. It was caught by Steve Cave from Sandown Pier on the Isle of Wight on 24 November 2007, at night on squid. David Bourne congratulated Steve in writing shortly before Dave passed away in early 2008.

The British boat-caught record is a fish of 19lb 9oz 2dr caught by Paul McEwan on 30 August 1987 in the Herne Bay area of Kent, using legered squid. From scale measurements Donovan Kelley determined the age to be 18 years 3 months. Donovan also estimated the weight loss in the six hours between capture and weighing (based on his own weight loss data), arriving at a catch weight of about 20lb 8oz.

In January 2007 ‘Sea Angler’ carried a report of Dave Ley catching a bass of 19lb loz on the shore at Ryde, Isle of Wight, with Dave deciding not to submit a record claim. The fish was caught at night on squid.

The European rod-caught record as listed by EFSA is a fish of 22lb 12oz, caught by G. Caamano at Corse, France in 1990.

In January 1991 Angling Times’ reported a catch of bass by six trawlers which included one of 28lb and four others over 20lb. The whole catch was taken on the bottom in the Eddystone area, and all fish were full of pilchards.

In December 1992 ‘Angling Times’ carried a report by John Holden of news of a bass just over 26lb, caught on a plug by shore angler Christophe Hulbert in the Dinard area, northern France. The same report mentioned that the French record as being 35lb.

In Spring 2006 the B.A.S.S. magazine carried a report of a 29lb 3oz fish caught by a dinghy angler trolling off the French coast.

David Hills fishing buddy Philip Cowood caught a bass in the Menai Straights which bottomed his scales at 25lb. It was in the 1960s and both anglers decided not to report it.