I wake abruptly from a strange dream where I am fishing on the rocks with Si Lewis and Arsene Wenger casting huge paddle tail lures the size of spaniels. We didn’t catch. I look at my phone to check the time, its 2am. I notice I had a text from Si an hour ago. It read;

The two of us have an agreement we can phone any time any day if you’ve just caught something special. So unless Si is cut off on a rock on a rising tide (not a situation where I imagine he’d be politely requesting if it’s alright to converse!) he must have some big bass news to convey. The surreal dream is swiftly forgotten and I quickly type a reply;

“What’s happened? Sorry but the phone was on silent.”

Back comes an infuriating reply;

“Heading to bed now. Tell you in the morning 😉”

Si fully knows what he has done with this teasing reply. I am too proud to beg him to tell me now – though it’s a close run thing! I lie there, so annoyed with myself for not having the phone on, as the next best thing to catching a monster yourself is listening to a mate on the shore, adrenalin filled, breathless and in bits after they have passed such a milestone. When it comes to our French BASS correspondent though, receiving nocturnal phone calls reporting doubles are not unique occurrences. In fact, his catches, if distributed more evenly, would satisfy the dreams of a room full of bass anglers. Angling rewards are rarely equally shared and the fishing gods are evidently not Marxists.

Si’s fishing has been building with the tides for the past 5 nights. There were reports of schoolies to begin; followed by a few 4 to 6 pounders, then an 8 and 6.5 and yesterday night a 9 pound lump. Si said how his catching had been coinciding very closely with moon-rise and for past couple of nights he’d accurately predicted the time he would catch. Having spotted these patterns, predicting the time and date that might well culminate in a monster did not require either statisticians or tea leaf readers. The time of the missed call wasn’t all that long after moon-rise and this just added to the evidence that he’d chalked up another double.

I roll over, but my sleep for the remained of the night is even more fitful. On about the 5th time of waking, it’s light outside. My phone shows no more messages but reveals it has reached a time where I might just get the details on the Scarlet Pimpernel of bass fishing latest French raid.

“Ready to reveal all”

“Bastard!!” “This better be worth waiting for!”

After a pause Si replies;

“Just quantify it before I go nuts; pounds, ounces, cms will all do!! Only then will l leave you in peace.”

It seems I am now actually close to begging. I don’t get any words to my plea but a single picture pings back: 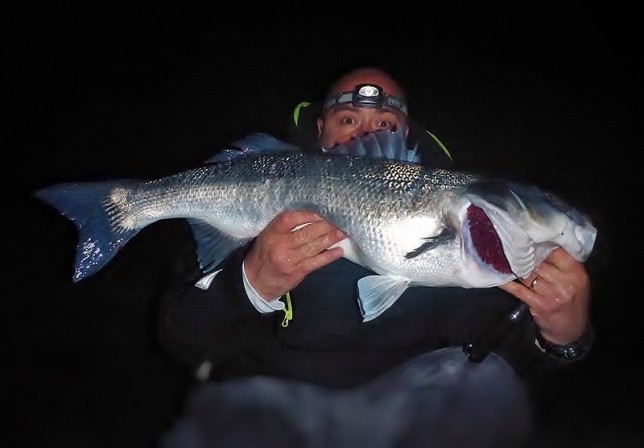 I study it. It looks really chunky and the distance between his hands looks large. Its certainly a fantastic creature – At least 12 pounds but I don’t want to  guess too large so I play it safe:

This time Si replies with a video and then shortly after with a photograph of the bass dwarfing his Tenryu Injection rod. The fish looks immense and I start reckoning it could have beaten his old personal best (13lb). 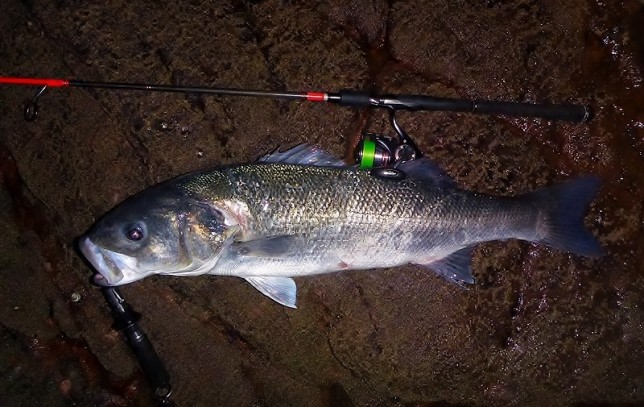 “Looks bigger than my guess actually!” “Lots of mass to that fish and long! Could be close to PB territory.”

Si wasn’t done with baiting me though;

“That’s not the number I want SI!”

There is another long and calculated pause before I am put out of my misery.

….My reply to this is unsuitable for this blog! I facetime Si and despite the interviening hours since he released the beast he’s still in a state of shock.

Although I lack experience of catching beasts of such proportions, I feel it’s possible our French correspondent may never be quite the same again.