A Bass Society correspondent asked if members had any experience of live prawn as a bait for bass. I have – a lot. It was a long time ago but I cannot imagine that bass have lost their taste for prawn.

In the Torbay/Dartmouth area floatfishing with live prawn was the standard method of rock-fishing for bass before the war and for a few years after. It helped that live prawns could be bought at the Brixham ice factory or at the tackle shop on the quay. At Plymouth prawns were not so easily obtainable. Few fished with prawn and I had to catch my own, in the harbour or out on the rocks, at low water. 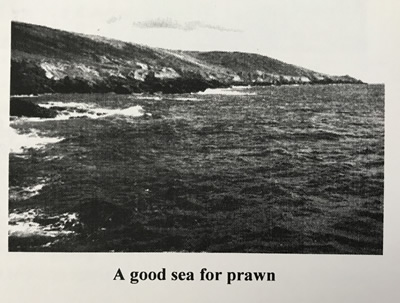 To an inexperienced youngster my catches (of bass) seemed good. If conditions were right I never came home without at least one sizeable bass, and often had two or three – once, five. In my last outing before the war I had three about 5 lb each and might have had a really outstanding catch if waves had not pushed me off my rock after an hour. For reasons connected with research I have rarely tried the method in recent years but have found it just as effective (though inevitably in these hard times with a lower catch rate).

Prawn is a clear-water bait. It helps to have a moderate “chop” but if the sea is rough and the water clouded it is better to use peeler crab. The bait is fished on light float tackle at a depth usually of only 5 or 6 feet. The technique is to find a suitable prominent rock where the backwash will keep the float in position a few yards out. Of the score or so places where I have tried the method two are of a type which is reasonably describable (something to which rocks do not readily lend themselves). One is at the mouth of a fairly small rock gully where the oarweed is exposed at low water. In such a situation large prawns can usually be obtained at low water. The bass seem to know that and can usually be expected at any time from about 4 hours before to an hour or two after high water. If they are scarce there is often a bite when the tide is only 2½ hours in (while the oarweed is still clearly visible). If they are about in some numbers bites will sometimes occur at half-hourly intervals. 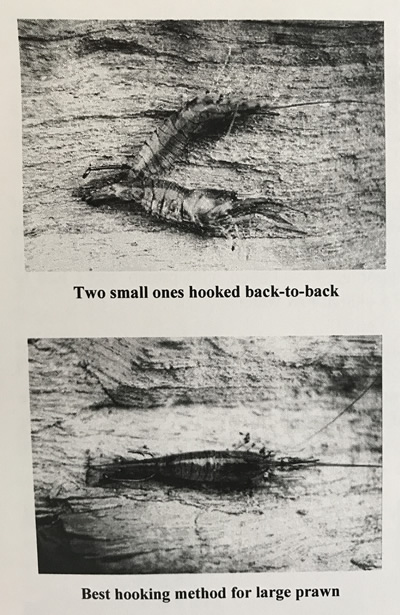 The other type is where a prominent rock commands a strong flow of tide. The float is fished on the edge of the current, usually fairly close in but sometimes 20 or 30 yards out (in which case the bait fishes rather deeper). In extreme cases the float can be let out 100 yards or more. I have heard of bass being caught at these distances but haven’t tried it myself. With so little leverage I imagine the fight would lack the excitement of a fish hooked close in.

When fishing in this way, close to the rocks and shallow, it is essential to keep down and not move about.

The bass caught by this method will nearly always be sizeable, but seldom really large. The largest I caught by it was 7½ lb (though I lost one at the net a pound or two larger). Really large bass seem to prefer large and odoriferous baits. In my records of bass over 10 lb reported in the press only 23 out of approximately 2,500 fish were caught on prawn.

Large prawns are not essential. I found that two small ones hooked back to back near the tail were equally effective with bass – though strangely not with pollack, which have a strong preference for large ones. The preferred way of hooking a large one for bass (or pollack) is to pass the hook through the second segment up from the tail, from side to side. Short shank hooks are best (I still have a few of the famous Model Perfects).

Rather than cumber oneself with a bucket of salt water and aerator the prawns can be kept alive for a surprising time in a small sacking bag soaked in salt water. It can be hung over the edge of the rocks into the water but not near a crevice into which the waves can jam it.

When a bite occurs the float will go down about a foot then move along laterally under the water. Allow a second or two’s law before striking – I have lost many a bass by striking too soon. Better too late than too soon.

If you use light tackle you will find you get far more fun from your bass by this method than by surf-fishing, or even light legering.