Conventional advice for lure fishing is to steer clear of coloured water, and seek out some water with a bit of clarity – how else will a bass see your lure?. But we’ve all done the long drive, only to find that there’s coloured water as far as the eye can see, and you’ve only brought lure fishing tackle, so we’re left thinking ‘If only I’d brought some bait’. So it’s often a matter of making the best of the situation, but it’s worth first considering what is causing the colour in the water and what lures could we use to overcome this apparent handicap?

Apart from local dredging, pile driving and so on, silty water is likely to be caused by rainwater run-off, either a very ‘peaty’ dark brown (highland drainage) or a tea-colour (lowland drainage from agricultural land).

Dark brown peaty water is often experienced at the estuaries of spate rivers i.e. rain or snow-melt in the high ground runs through the river course quickly and is often associated with flash floods. Here you could be faced with very high levels of fresh water (low salinity) high volumes of cold water (bass tend not to like low temps) and suspended particles of detritus. Faced with this combination it might be better to fish away from the influence of the flood all together as bass will often move out to sea to get well-away from it. Also their ability to feed by sight is very much impaired. But, when the storm subsides, they can be very hungry, so it can be a matter of judging when to lure fish after a storm.

Lighter, tea-coloured run-off can be a different matter, a significant area of this type of colouring might actually attract a few bass, especially where streams pours across a beach or into shallow gulleys towards the water’s edge. Where this silty water mixes with the shallows can be worth trying. Some anglers like to fish along the edges of the coloured water, as often there can be a distinct boundary between the coloured fresh water and the sea water because the two have different densities with the fresh water being the less dense. 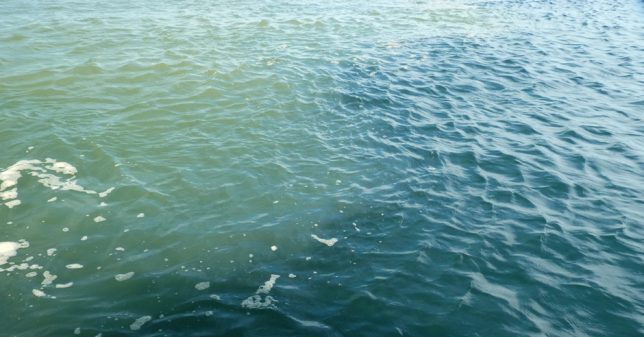 Sometime this will cause the silty fresh water to form a layer on top of the salt water, so that underneath the freshwater the sea water could be relatively clear (but with low light intensity) allowing predators like bass to become confident, so in these circumstances it can come down to trial and error to determine how deep the clear water is to be found.

A lure that you can ‘count-down’ is helpful in these situations because you can let the lure fall in the water for a varying number of seconds as you search the water column for bites. If you get a hit at three seconds drop, you know you should repeat the count-down to at least three seconds before beginning your next retrieve. A metal lure or jig, a sinking plug or a weighted soft plastic is just the ticket for this kind of search and find situation.

There are some situations where the colour in the water extends from surface to sea bed, due to suspended mud or broken down sea weeds suspended in the water column. Each requires a different approach, but where stirred up mud is the main issue you shouldn’t be bothered by bits of weed fouling the hooks on your lures. If the water is choked with fragments of weed it can be very frustrating to have to pick off bits of lettuce or wrack from the hooks on your lure every cast or have your lure’s action killed by even tiny bits of weed. The answer in this situation is to fish a ‘weedless’ soft plastic with the hook point only just protruding or concealed in a slot along the body of the lure. It’s amazing how little weed a lure fished like this will pick up and even the most un-fishable of spots can hold fish. 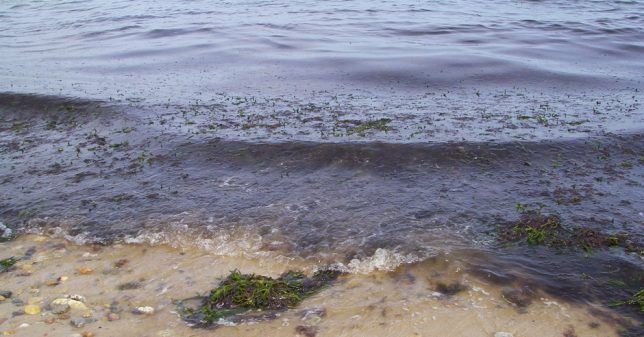 Not to Dr. Mike Ladle and a weedless soft plastic. 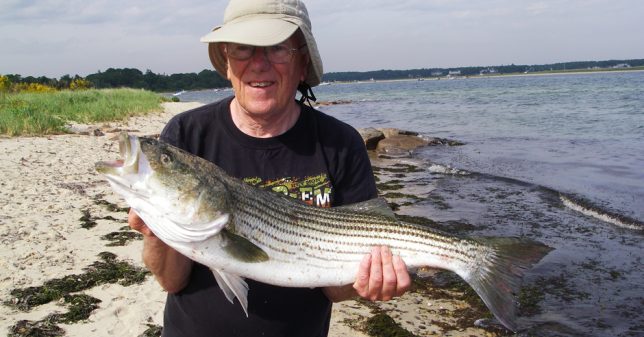 The principal to remember is that often, coloured water will be as a result of wave action, especially during or after a storm and this might be good news to the fish.. A sudden bit of natural colouring like this, plus a moderate wave action – can help to stir the bottom and dislodge anything living in it. That might be sand eels, or clams, or lugworms, or flatfish. Sometimes this type of water is worth a try, even in bright daylight, and if you can cast near the edge of the coloured water, so much the better. If it looks too shallow to fish, why not come back in the dark.

If this is slight, it can be quite natural to have water the colour of very diluted milk. The shoreline of North Kent is a case in point, where the low chalk cliffs and chalk ledges are always eroding or wearing down due to wave action; sometimes there can even be a small bay that is clear, due to filter feeders (e.g. anemonies at work). On the whole I don’t see any problems with slightly chalky water. Heavy falls of chalk from high cliffs might be another matter and time to get the bait rod out.

If all else fails

If the water is just too dirty for fishing, then I’m tempted to move to a shingle beach and fish the shallows. Such an area can be a bit clearer, due to, I suppose, a filtering or trapping affect of the shingle as the waves come in and back out.

Other tactics for dirty water include:

Use white water to advantage

By this I mean the frothy water that can be along a line of rock or surrounding a rock that protrudes from the surface. Sometimes a direct cast into the white water can suddenly produce a take. The same goes if you cast to the rock face and let the lure plop into the white water.

Use sound and vibration to advantage

A noisy lure might produce a take when all others fail. Whether this is due to the fish getting startled and snapping at the lure, or whether the noise generates a feeding instinct, is hard to say. Some hard / plastic lures have rattles in them, or you can insert rattles into some soft plastics. Many bass anglers swear by rattles for coloured water while others don’t see the attraction, but it’s unlikely that rattles will put fish off, so I’m in favour as it gives an extra sense to stimulate other than sight and something for a bass to home in on.

One problem with coloured water is that the fish can search the bottom using their nose and lateral line and not come up in the water at all. I have always put a deep diver in my lure pouch for such moments, just in case it gets the attention of a bass on the bottom. I happen to take a Yo-Zuri Crystal Minnow with single hooks (to reduce the likelihood of snagging), but there are others on the market nowadays like the Zonk.

Use the tide to advantage

In some saltwater estuaries the high water ‘slack’ period can produce a partial clearing of the water colour as some of the sediment settles out of suspension. On some rivers there is no slack water (the water direction goes into reverse as though someone has flicked a switch), but in some there is a pronounced slack water period of say an hour, maybe more. Neap tides can have a similar effect because the rise and fall of the sea is not as great as over spring tides. This is the time to try sub-surface lures, and/or a spinner. If it coincides with very bright sun, then so much the better.