What do three bass fanatics do on a full Moon? No, we don’t turn into werewolves and howl at the moon; we walk the two miles out to sea on a low spring tide and ﬁsh with plugs in amongst the gullys of southeast Jersey. 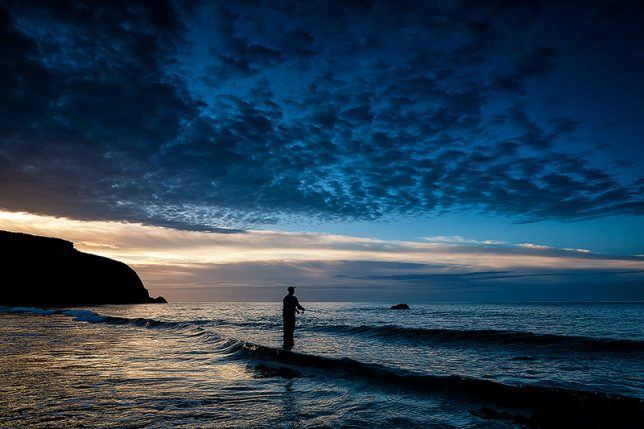 So it was that Andrew Syvret, Derek Buesnel and I arrived at 11.30pm on the slipway that leads down to Seymour Tower some two miles out to sea. The tide was dropping fast and the moon was beginning to show from behind the clouds, giving an impression of the wet sand being silver. The rocks and gullys were visible in this light and although we had head-torches on, we didn’t need them.

Seymour Tower was built to defend the island against French invasion during the Napoleonic wars, and is set some two miles out to sea amongst rocky gullys and huge sandbanks. The area has fast tidal ﬂows and has claimed many lives over the years. 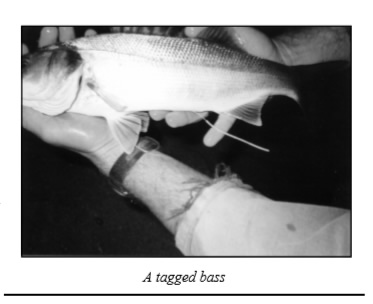 It was the middle of the B.A.S.S. tagging programme and we were keen to tag some more bass that abound in this area, which feed on the huge shoals of sandeels that live on the banks.

After a polite “Hello” on the slipway we get our chest waders on and set up our spinning rods and lures. Andrew and I chose a Sammy lure and 3 small Redgill or Delta eel tied above the lure, whilst Derek chose a small Chug Bug. After a ﬁnal check of our equipment (which for me included a mobile phone and a lifejacket) we were off, stepping out in anticipation towards the tower in the distance.

We crossed two gullys where the water was ebbing fast, like crossing a fast-ﬂowing river. As we walked in the shallows the water was illuminated by phosphorescent light, giving a good impression of the stars. Andrew, who is knowledgeable about these things, quoted the Latin name for the reason for it. We walked on until we got to an area which we knew should hold ﬁsh; such knowledge had been built up by many years of ﬁshing these waters.

We spread ourselves out and stood, chest deep in the water. You could hear the sandeels breaking the water in the darkness as something scared them. It wasn’t long before Derek was into a ﬁsh of around 3lb which took his Chug Bug like a train. After a game ﬁght it was netted and taken back to the shore to have a tag inserted in its ﬂank. Derek measured the length and girth of the ﬁsh and removed a few scales from the right place, putting them carefully in a small envelope. A small yellow tag with reference number and telephone number was then inserted into the ﬂank with the aid of a scalpel, then the ﬁsh was returned to ﬁght another day. 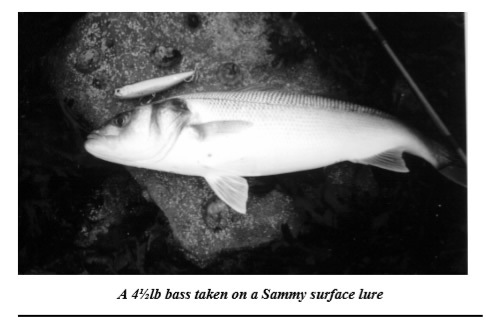 Don’t imagine that either Andrew or I were watching Derek doing this – jealousy can be a terrible emotion and we continued ﬁshing in an effort to match Derek’s ﬁsh. We moved on to an area where the water was ﬂowing out to sea at a fast rate; Andrew took two ﬁsh in quick succession, not big ones but big enough to tag. He quickly inserted the tags and released them back.

“What about me?” I hear you ask. Well, someone has to write the notes!

The tide was almost low and our time amongst the gullys was limited. Derek and I moved off to ﬁsh a reef that we were certain held ﬁsh, whilst Andrew stayed and ﬁshed a small rocky island surrounded by sand. Derek took a couple more bass, and I caught a rather nice pollack of around 3 oz! Fifteen minutes later Andrew appeared from the darkness, cursing that he’d lost the biggest bass he has seen; it had gone for his lure 4 or 5 times and missed. Derek and I both believed him, even though we hadn’t witnessed this spectacular sight.

The tide had now turned and it was 2.45 in the morning. Time to go back up the beach to our waiting cars. There was something magical about catching those bars of silver under a silvery light and watching them being returned to the still water to ﬁght another day. I hope that we have many more trips down amongst those gullys during a full moon — an experience not to forget.