Some years ago I had a friend, Roger, who was a car salesman for a main dealer in Plymouth. He was very good at his job and sold a record number of new cars. His boss, the owner of the business, gave Roger a large Christmas bonus.

A little while later, Roger came ﬁshing on my boat. My heavy displacement hulled boat was just too slow for his taste. Roger liked horsepower and miles per hour, lots of them! He also took a liking to boat ﬁshing. With his bonus burning a hole, as they say – he bought a new Pilot 520 with a Mercury 40hp and all the necessary accessories and equipment to get aﬂoat. That garage owner was indeed a very generous man. 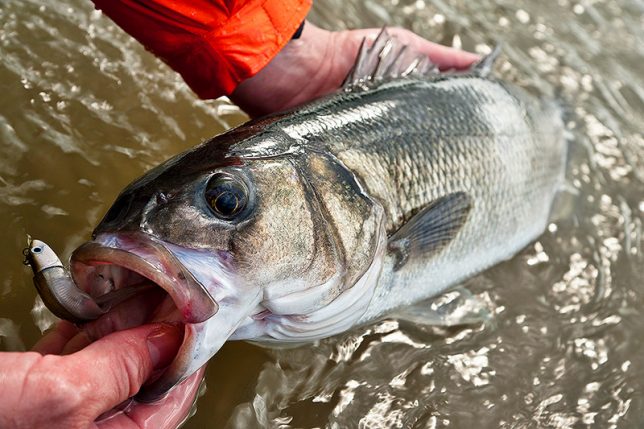 The new boat was kept in Sutton Harbour Marina. Roger became particularly fond of pollack ﬁshing. In fact, he did not really want to ﬁsh for anything else. We spent many hours on the various reefs and other Pollack marks around Plymouth. However, I was really interested in ﬁshing for bass. Luckily, some good marks for pollack also produced bass from time to time. Plymouth Breakwater and Drake’s Island. Our favourite bait for the pollack was live prawn which came from Millbay Docks, where I would either push net at low water or use drop nets after dark from the piers. The prawns were kept alive by suspending them in the water in a container. Unfortunately, there were anglers who were unable – or too lazy – to net prawns themselves so simply removed them from my container or, worse, took the container and the prawns!

Another excellent bait, live sandeel, was not readily available in Plymouth at that time. The only places to get some were from a certain ﬁshmonger in Par, or the netters in Teignmouth. Today a local tackle shop usually has live sandeels but you have to be in Plymouth early! On the occasions we used live sandeel, we sometimes connected with a few bass as well as the pollack, particularly at Plymouth Breakwater.

If we were not drifting with prawn or trolling a rubber eel around the breakwater, Roger and I usually anchored at a mark which had been discovered by a diving friend. There is a small, low reef surrounded by sand in about sixty feet of water 100 yards south of the breakwater. The tide, on the outside, always ran from east to west on both ebb and ﬂood. Anchoring was easy but the boat had to be right on the mark to get the ﬁsh. As this was very much an inshore mark, we were able to line up certain features to put us in the right place. Differential GPS would have also made it simple but that invention was along way off! Decca was, of course, far too expensive then.

Once anchored, we used a straightforward rig with a 1oz weight on a sliding boom, a 6-8 foot trace and a size 2/0 short shank hook. The prawn was hooked through the second segment above the tail, then lowered to the seabed and very slowly retrieved. Pollack seemed to ﬁnd this irresistible. The familiar initial resistance was followed, ﬁrst by a slow bending of the rod, then suddenly a strong dive towards the seabed by a hooked Pollack. We caught them there to over 10lb, which is a big ﬁsh from inshore waters. Occasionally, a bass took the prawn and, unlike the pollack, ran away from the boat and often surfaced some way off. The take was distinctive, too. Bass just hit the prawn, no messing about nibbling like pollack. Whack! They were just there on the end.

The mark was outside the main shipping channel and we often ﬁshed there after dark in the autumn. One evening we had been anchored there for several hours with only a few small pollack to show for our efforts. We were thinking of packing up, the tide was ebbing fast and we were both feeling the cold autumnal air. I was still retrieving slowly when I had a smash take, which ran line off my 9000-size multiplier against the slipping clutch. “Obviously not a pollack” I shouted to Roger. After about ten minutes of battling with the ﬁsh against the strong tide, it suddenly surfaced about ten yards away. We were both stunned. With the deck light on, we could see that this was a big bass. Roger got the net ready as I cautiously brought it up to the boat. He slipped the net under it and everything seemed ﬁne. Unfortunately, the wooden handle was not quite up to the job. As he lifted the ﬁsh the handle snapped in two! Luckily, Roger’s swift reaction saved the day. He leaned over the side, grabbed the net ring and pulled it, with the bass, into the boat. After that we had a few more drops with the live prawn but nothing showed any interest. We up anchored and headed for harbour talking about the one that so nearly got away!

The scales on board indicated 10lb 10oz, but later at home it went 10lb 2oz. Still over the magic ten-pound mark, though.

Since then I have had bass up to 9lb but nothing to match my ﬁrst ten-pounder!