It was a beautiful September day, warm and sunny, with a hint of autumn in the air. The leaves were beginning to turn to gold and Boston ivy was crimson in the sunlight; it was good to be alive. I’m lucky to live a couple of hundred yards from the head of a creek which feeds a large saltwater lagoon. On the bigger spring tides, bass run in the creek and can be caught on bait (prawn) and on plugs and spinners. Flies I have yet to try.

Usually this spot is ﬁshable only in early morning or late at night due to swimmers, sailors and the odd canoe, but later in the year when summer is over, it can be ﬁshed during the daylight. It was on one of those days found myself, carp rod in hand with plug attached hoping for a late ﬁsh One of the advantages of daytime ﬁshing is that you have to put up with the occasional passer—by asking the obligatory, “have you caught anything?” and the day in question was no exception . . . 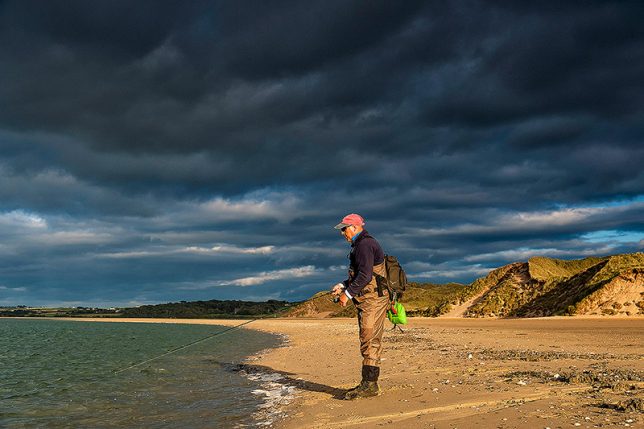 At a guess he must have been around seventy, and the skipper’s cap faded with time marked him as a man of the sea. I sometimes feel a bit miffed when someone disturbs my concentration, but I warmed to his happy face, and soon after we were in conversation. He told me that he’d ﬁshed himself for many years, (both from the shore and from his boat) but the effects of arthritis made ﬁshing a painful and unpleasant experience.

“No lad, I’ve packed in ﬁshing now, my rods are away in the shed, and I doubt they’ll ever come out again” he said. This was spoken with a tinge of regret, but I also got the impression that he enjoyed life, and had now moved on to other interests. We chatted about spinning, and he expressed an interest in the plug I was using. He confessed that he’d not caught many bass, mainly ﬂatties and cod, and had never seriously spun for ﬁsh in the sea.

“We used to catch a lot of mackerel but that was on feathers. Do you catch many bass on those then?” he asked, pointing at the plug. Before I had a chance to answer a bass of about 4lb, in only two feet of water slashed at the plug, missing it by a couple of inches.

“Bloody hell, did you see that?” he exclaimed. With heart pounding, I cast my lure back across the lagoon and watched intently as the little plug wiggled seductively in the water. This time the bass made no mistake as it hurtled at the plug and took it with a sideways swipe. The carp rod bent, the reel screeched, and the bass ran for cover in the clear water. On light tackle and in shallow, clear water the bass fought like a demon, taking line and refusing to give. However, steady pressure from the rod and a well adjusted clutch took their toll and a couple of minutes later a fat autumn bass lay glistening in my landing net. One for the table I thought as I quickly dispatched the ﬁsh.

In the heat of the moment I’d forgotten the man and I looked up to see him wide-eyed and very excited. He asked about the lure, the rod, the line, the ﬁsh, the net, in fact everything! Without waiting for my response he cycled off at a rate of knots while I packed up my gear and headed for home.

The next day dawned bright and clear and I decided to have another session at the same spot. High water was at 2.00pm, and I’d have enough time for a quick session before meeting the kids from school. Later that day I found myself striding conﬁdently towards my spot, carp rod in hand, sure of myself of more sport, but as I approached my heart sank. There was somebody already ﬁshing in my spot, for MY bass! Disappointedly I turned around and started to head for home but something about the ﬁgure in the distance seemed familiar. I’ll just take a quick look I thought.

Well you can guess the rest. There, ﬁshing my spot, defying the pain of arthritis, was the man from yesterday, skillfully spinning the stretch of water with a shiny new plug on the end of the line . . .

Smiling, I turned and headed for home.