For years several anglers have realized that under certain conditions fly fishing is a superior method for bass. They have diligently pursued their quest while others, including me, felt they were just amusing themselves with undersized fish.

In the early 1990s a fly fisherman became a regular visitor at a local mark that I, unofficially, regarded as my own preserve. It was obvious to me that this man was an accomplished angler. Keeping my distance I covertly watched from the shadows as he caught dozens of scad, mackerel and small pollack. However I never witnessed the capture of a bass. After many weeks of cat and mouse we finally came face to face. He was very friendly, giving me a few saltwater flies and plenty of advice about how to use them. Later I found out that he was an angling journalist called Derek Moody who had written a series of interesting articles about saltwater fly fishing in Fly Fishing and Fly-Tying magazine. When I asked how many bass he had caught at the venue, he confessed that he had landed only two schoolies! 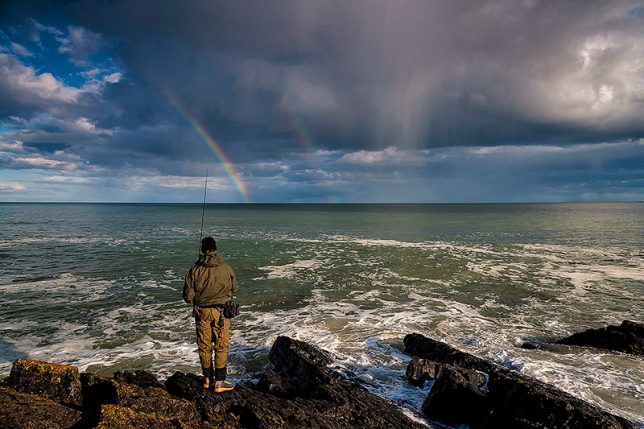 Intrigued by the method, I pressed into service an old reservoir trout rod with an eight weight floating line. My casting was appalling and the line occasionally ended up wrapped around my shoulders rather than out in front of me! Even so, I managed to catch scad, mackerel and small pollack. On some tides fish were so plentiful that any reasonable cast was capable of producing a fish.

Although I live only ten minutes drive from the mark, I did not, at first, realize its true fly fishing potential for bass. This became more apparent when I began to run a B&B tailored to anglers’ needs. Several of my guests were skilled with a fly rod and often caught more than thirty scad a session, usually giving up through tiredness or eventual boredom. The first to contact a bass was Chris Barnard who caught a small fish of about 30cm, at the end of a session that produced a large mixed catch of scad and mackerel. Chris gave me an assortment of self-tied flies that had proved deadly.

Other fly anglers followed and it became obvious that pursuing bass needed a different approach. Freshwater gamefishers usually have superior casting ability as well as knowledge about the most appropriate tackle. However, I consider that many of them fish too fine for bass. There is no need to use long traces and fine tippets. Time can be lost unpicking wind knots and constantly changing flies. Anglers from a saltwater background have a better understanding of the forces of wind and tide, and the many permutations that influence the feeding patterns of inshore bass.

Recently I realized just how special the fishing was. It was equivalent to fishing a good sea trout river. My enthusiasm increased and I began reading game fishing magazines and books. It appeared that trout fishermen considered a wild brown trout of around 43cm a worthy capture. I also sensed that serious anglers wanted something more challenging than stocked rainbow trout from small waters. In many areas problems with salmon and sea trout stocks gave serious cause for concern.

Most of my success has been restricted to a few parochial areas, but after eight years a few lessons have been learned:

Most of my fishing is now restricted to night tides because of an increase of jet skiers and speedboats. 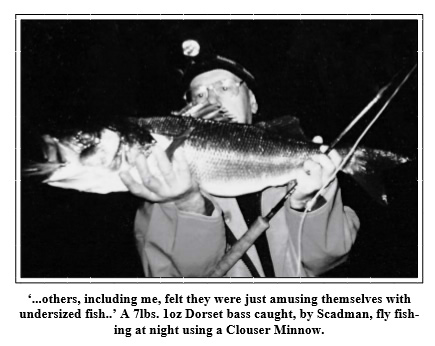 Another breakthrough came when Steve Binckes introduced me to ‘dead drifting’ a Clouser Minnow. It is perfect for fishing over weed beds because the dumbbell eyes allow the lure to fish upside down. It seldom snags. It is important to mend the line (straighten) before starting the drift. Bass often use the cover of weed to ambush passing small fish. The most productive fishing is when the current is running at around two knots. Tides building up from neaps are favourable. During the highest springs the tidal stream is often too heavy.

Angling is an endless apprenticeship that requires an open mind. In early June 2004, Silas Maitland joined me for a late night session. The most consistent marks contained very few smelts and so were of no interest to feeding bass. It was a calm night and in the distance we could hear splashing. The fish were feeding in extremely shallow water — less than two feet deep — the problem was clumps of weed. I tried a Clouser but snagged every cast because the tidal stream was too weak to push the weed over. Silas changed to an olive/green Gurgler fished on a number seven floating line to help with a quiet presentation. Within minutes this surface-popping fly was seized by a two-pound bass that could be seen shadowing the fly in water only twelve inches deep. Other fish were lost, including a bass of about 5 to 6lb that slashed at the lure several times. It was exciting fishing with bass making visible bow waves across the moonlit surface film. Silas an experienced, world travelled angler, had to confess it was very special.