The following press release was published by MAFF on 6 December 1999, despite public consultations regarding the management of the offshore fishery.

The measures are aimed at building on a successful programme of action which has increased opportunities for commercial fishermen and anglers.

Mr Morley said the new restrictions, which will put catch limits for bass on vessels had received overwhelming support from interested parties in a recent consultation exercise. 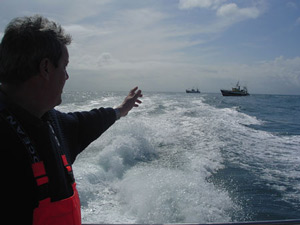 A weekly landing limit of five tonnes per vessel will be imposed in order to limit the catches of adult fish travelling to and from their spawning grounds. As an alternative, vessel owners may choose to be licensed to land up to 15 tonnes a month. Bass is highly prized by anglers and chefs and provides a vital source of income for many fishermen, particularly in the West Country.

“I am very pleased to be able to introduce these measures and welcome the fact that it has been supported by a large majority of fishermen anxious to conserve stocks. There are also marketing advantages behind imposing catch limits. It helps to maximise prices, thereby making the most commercially of what is available. There are already very effective and well supported bass conservation measures and these will continue. However, large catches of fish while heading for their spawning grounds was starting to jeopardise this conservation effort. This is a good example of fishermen and government working together to safeguard an industry’s long-term future.”